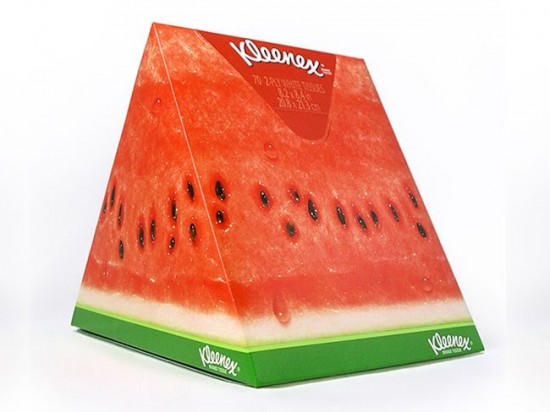 It’s allergy season again! What could be more appealing than to wipe one’s nose with a watermelon wedge?

In response to the 60% difference between its winter and summer sales, and amid a growing interest in biomimic marketing (read this), a couple years back, Kleenex introduced its “Slice of Summer” packaging design. Los Angeles-based foodie illustrator, Hiroko Sanders, did the honors in orange, lime and watermelon.

Craig Smith, brand director of Kleenex, was quoted in a NY Times story about the tissues:

“This keeps the category relevant during this time of year. We saw close to 100 percent incrementality, meaning sales of the novelty box did not cannibalize sales of standard Kleenex boxes. People who were not engaged by the facial tissue category were pulled in, while regular users were buying this special package in addition to their normal facial tissue purchases.”

I would love to attend a press conference and try to keep a straight face while someone was talking like that. Prior to the fruity tissue boxes, Kleenex tissues sales had experienced a drop in sales, which was attributed to the economic downturn. (I guess people were using their sleeves instead?) 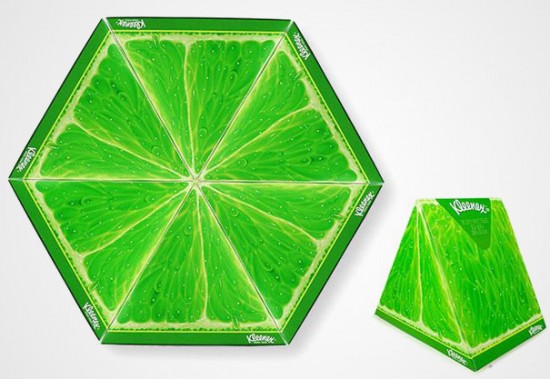 Here’s some more tissue trivia for you:

Kleenex was introduced in 1924 as a “sanitary cold cream remover”. It derived its name both from that cleaning function and to link it phonetically to Kotex, the sanitary napkin Kimberly-Clark had introduced just four years earlier. (The name Kotex refers to “cotton texture.”) Shortly after Kleenex appeared in stores, a Kimberly-Clark researcher with hay fever began blowing his nose with the tissues. This moment — call it achoo! meets aha! — led Kleenex to recast the brand: advertising proclaimed it “the handkerchief for health.”

Today the average home contains four boxes of facial tissue, and users purchase tissues about eight times a year, according to Kleenex researchers. 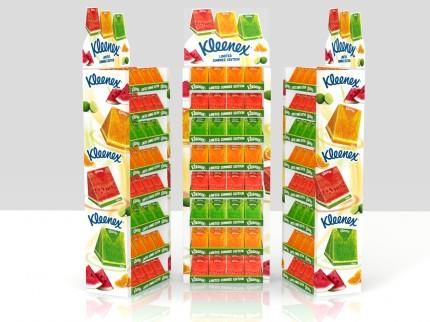