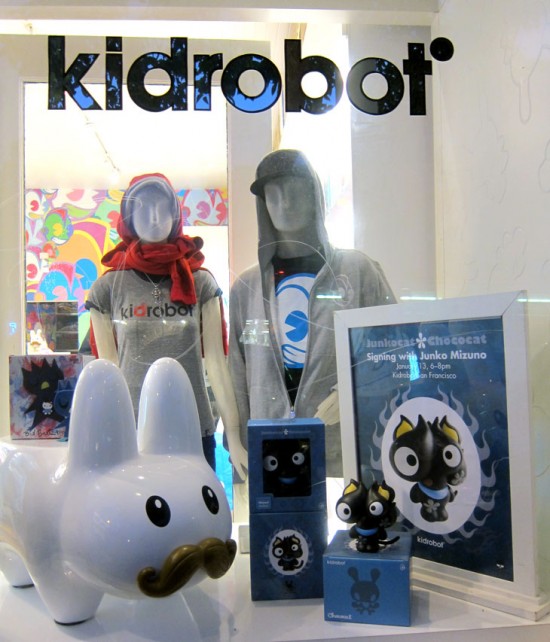 I think it’s been about seven years since I stood in line at Kidrobot SF for a toy release I wanted for myself. (I did mule that Donkey Dunny back in ’09 for Kyle Nelson though…) Maybe I got inspired after Johnny Cupcakes’ lecture on brand devotion last week or perhaps it was the up-for-anything attitude of The Wiz, but probably it was merely the reality of a twisted black vinyl version of Sanrio’s Chococat by the fantastic Junko Mizuno. 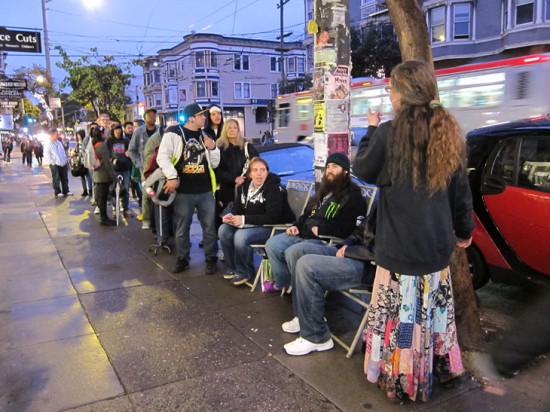 It actually felt kind of good to hang out for a reason-slash-compulsion again. We wanted to support Junko, and we wanted to be the 25 people who got her exclusive hand-adorned print. It’s like stepping into a little community of like-minded people you recognize from seeing around at local toy events. (That means YOU: Andrew, Diego, Jeff, Stephanie…but not that hippie in the patchwork skirt giving us a Sit and Lie sermon.) Kidrobot even posted proof I was there on their Flickr. 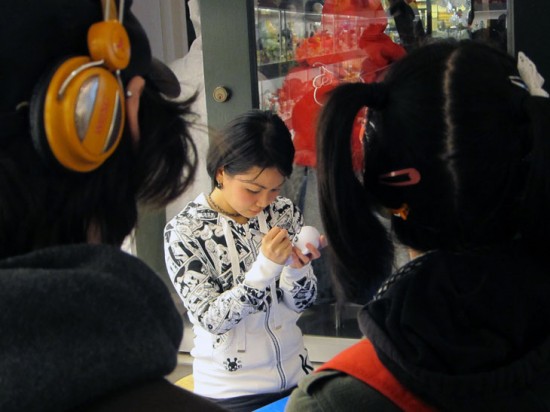 My position in line was behind these pretty adorable kids. If you happen to be reading this, I want to salute you for your off-the-cuff “coffee enema” retort to Haight Street’s finest denizens, but also remind you that smoking cigarettes is like totally UNcute! 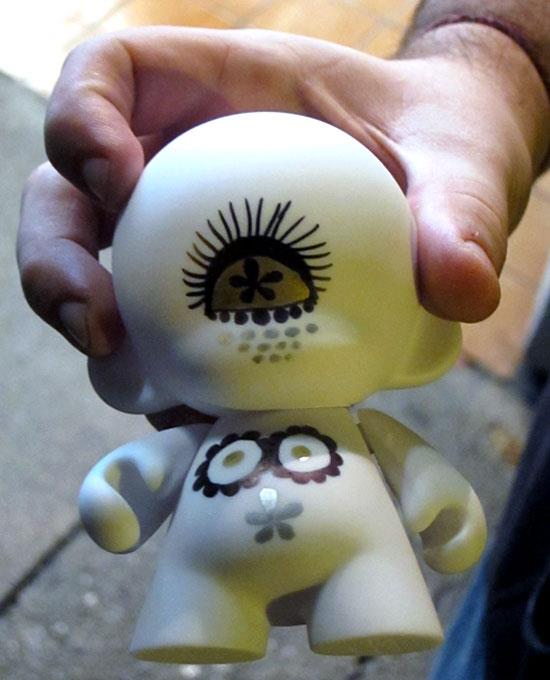 Junko had already drawn upon three blank Kidrobot toys when I, the tenth person to buy her Junkocat, reached the front of the line. These weren’t stray sketches either. She really focused, and the folks who walked away with them had the hugest smiles. 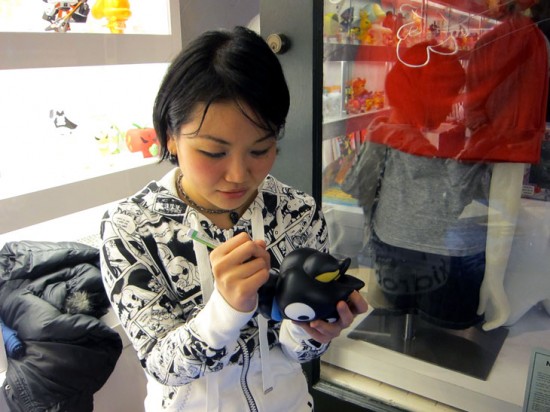 I really dig this toy. And I’m not even some sort of Sanrio junkie either. If you need me to make a comparison so you know my love for Junkocat is real, I’ll tell you straight up that Amanda Visell’s Bad Badtz Maru doesn’t work for me at all. Bad Badtz was a portly black badass, and she rendered him flat and blue. I’m pretty sure the goths are bummed out, but it’s hard to tell because they always look like that. 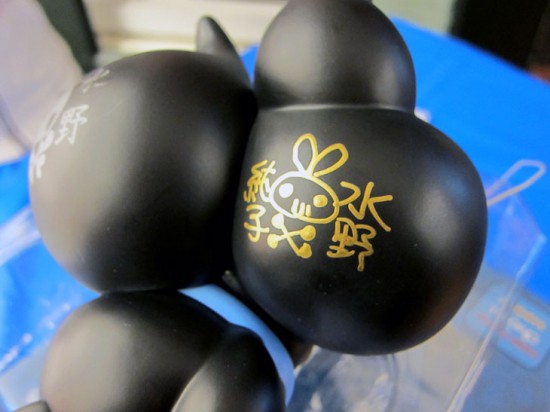 The concept and style of this character is great. It’s like Chococat lapped up the Mizuno milk and transformed into something out of Pure Trance. Junko, herself, said she’s happy with how the figure came out. She’s only disappointed because licensing doesn’t permit Junkocat to be sold in Japan where she (and Sanrio) are from. 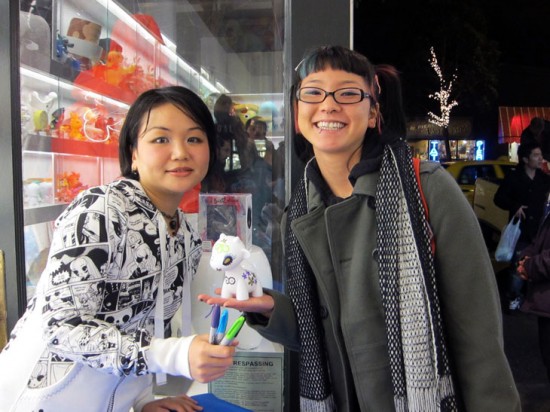 Even Kidrobot’s “Raffi” from Munnyworld looks transformed into something awesome with just a few strategic markings from Ms. Mizuno! 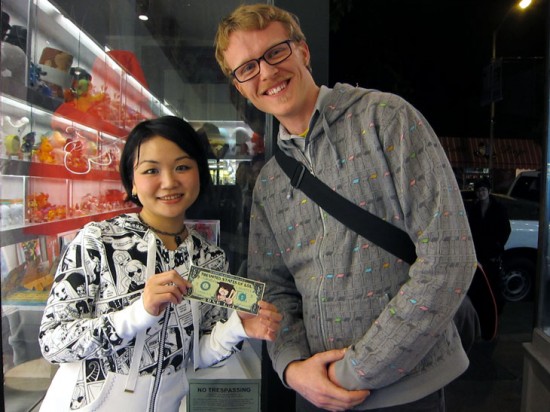 The Wiz is a big fan of Junko’s manga. He would have camped out to be one of the 25 people to receive the exclusive Junkocat print. 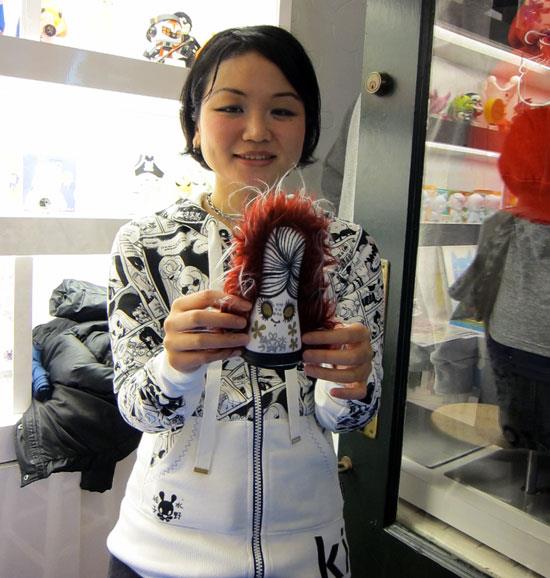 This rad little Circus Punk came home with me. I’m so torn! I’ve been talking to artists about the “drawing on demand” expectation that has become synonymous with today’s toy signings, and many of them don’t love it. But here I was at Kidrobot with a blank CP in my coat pocket and Kidrobot staff telling attendees to head down the street to the art supply shop, buy a canvas and jump back in line. When I revealed the CP, KR gave me a big thumbs up, and I’d be a liar if I said that I didn’t absolutely adore the result. I think it might be kind of strange to present a blank canvas to a working artist at a toy signing and expect that artist to go to town on it for free, but then the line is admittedly blurry when it’s being encouraged by staff and every other customer is lined up with a blank vinyl. In conclusion, I have yet to conclude anything except for the fact that I love my Junko Mizuno Circus Punk, I’m really thankful to her for her time, and I’ll ask her about it directly when I interview her next month. 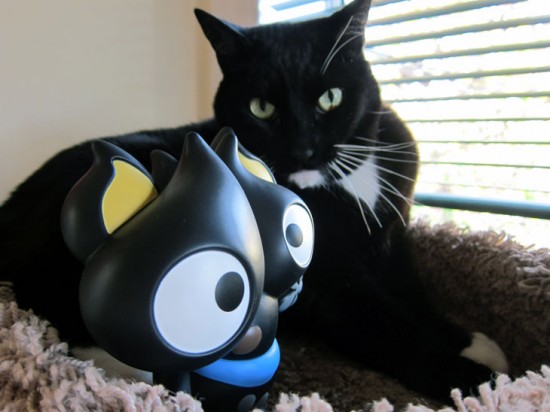 Oh yeah, two more important critics have weighed in on the Junkocat toy. 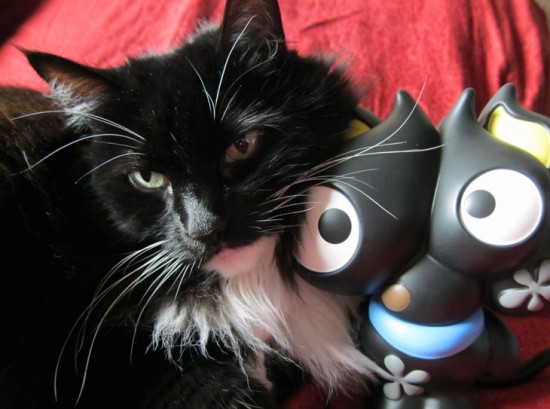