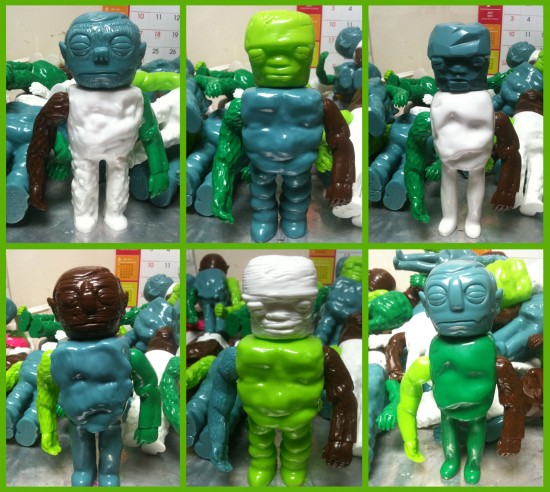 New kaiju kid on the block, Grody Shogun, is celebrating the art of the mash-up with its SDCC 2011 debut figure, simply called: Monster.

Monster refers to a type of collector. Maybe you know him or her? Maybe it’s you?  A monster collects only the rarest prey. They share in their conquests only as victors, dominating an otherwise peaceful town. This horrendous appetite judges not on intent but perceived value, be it real or trumped up. Will the monster ever rest?

While I’m not particularly a fan of collecting based on rarity, I do like the spirit of offering up a vast pile of green body parts that make “over 200 one-offs.” 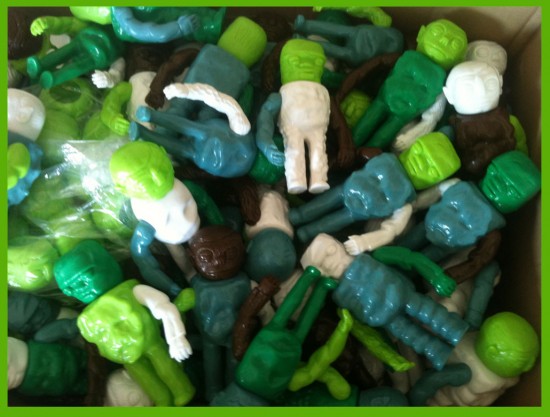 The figure has 6 different heads, 6 different arms, 4 different bodies and 5 different colors, which means the chances of there being two of the same figure are “almost 1 in 1,000,000.” There are 3 points of articulation on the 6-inch Japanese vinyl monster. All that for $25, too. This isn’t really my bag per se, but big props for being green and the whole “choose your own adventure” mentality. I also like Grody and Lulubell’s “Love Toys Again” tagline and pricing. You can pick out your own Monster next week at DKE booth #4728. Or, grab one online  now from Lulubell here.