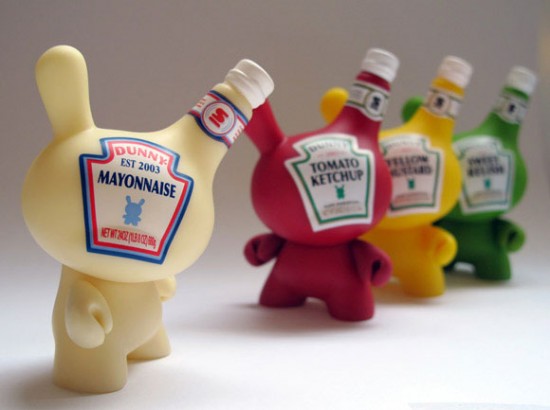 bite (formal) – to eat into
bite (slang) – to plagiarize

Well, well, well. It seems the folks with the mouse ears had both their Webster’s and their Urban Dictionary open when they cooked up the 3-inch Vinylmation condiment set shown below. Note, if you will, the similarity between these (released by Disney in a “limited edition” of 2000 in late June) and the 2010 series Dunnys (designed by Sket One, above, and released by Kidrobot on different occasions throughout the summer). In further proof that you can’t please anyone, people on Twitter have briefly stopped bitching about how Kidrobot gave Sket five Dunnys in the 2010 series to complain about Disney’s dumb doppelgängers instead. 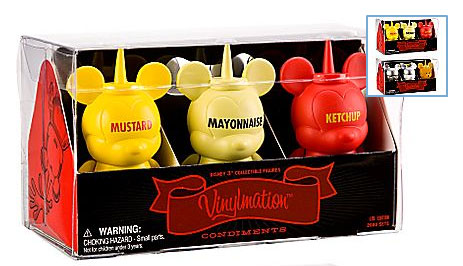 For a toy exclusively sold in Disney stores, Vinylmation, much like a rogue bottle of Heinz, is somehow splashed all over the Internets. I hadn’t even heard of this product until a well-meaning, but confused relative brought me one back from Disneyworld. It sure does have its fans, though, and most of them probably have never heard of a Dunny, unless, of course, they happen to be looking for a toilet in Australia.

I’m no lawyer, and it’s not my gig to figure out who came up with what first, but I don’t need to have an ESQ in my name to see that the Vinylmation condiments are slapdash and uninspired. What exactly is happening with the font, especially on Mayo? If you buy these, you are buying into the logic that Disney thinks you’re too dumb to recognize that a red “bottle” with a squeeze top is meant to imply ketchup. If someone gave me these, I would scratch off the “MUS” in “MUSTARD”.

As to the Dunnys, Warhol’s iconic soup can set a pop art precedent, and Dunnys themselves are hardly an original idea. However, that said, Sket One’s been mashing up food at the toy scene level for years, and he does it really well. His one-off custom toy mashups have more flavor than a whole case of Vinylmation. Respect it! ‘Nuff said.