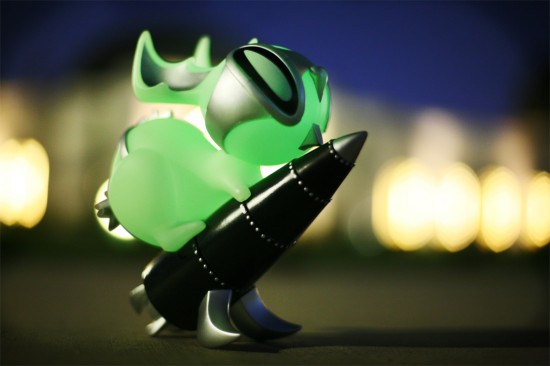 So what if Nathan Hamill and I have the same favorite color? There’s room for both of us to collect green toys as long as he keeps producing them, too. To that extent, I’m happy to say Hamill is releasing his second vinyl figure, Bellicose Bunny at SDCC 2011. The Radioactive G.I.D. edition is limited to 50 pieces and will be available at the October Toys booth #4838 for $49.99. Despite previous reports, the figure is about SEVEN inches tall. (Every inch makes a difference. Cue “that’s what she said”.) Each Bellicose Bunny sold at SDCC also comes with a special print made for the release, and Hamill will be available at the booth Saturday at 3PM to sign. 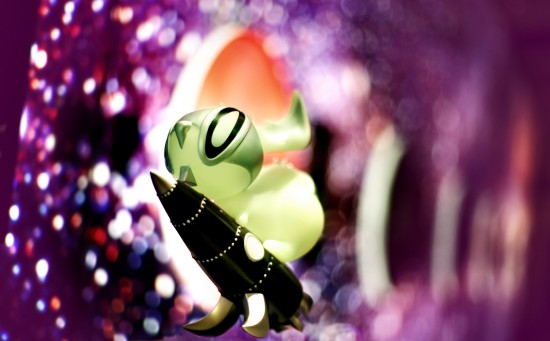 Here’s the story of Bellicose Bunny:

Forged by the stars and space alike, and stuff and things, the Bellicose Bunny was enlisted by top minds throughout the universe to seek out, thwart and destroy all known evil. Equipped with a pair of space goggles and the Sword of Ulyssia, he mounted his Daucus: Class 8 Rocket and embarked on his quest. Now he’s reached this galaxy and needs our help in his noble mission. Hear his cry for peace: Starbunny Fields Forever!

P.S. Bellicose means “demonstrating aggressiveness and willingness to fight.” Just in case you didn’t know and didn’t want such an angsty word to show up in your Google search history. Although, frankly, Casey Anthony can search for chloroform and shovels and still get out of jail, so, you know, feel free to search for whatever.