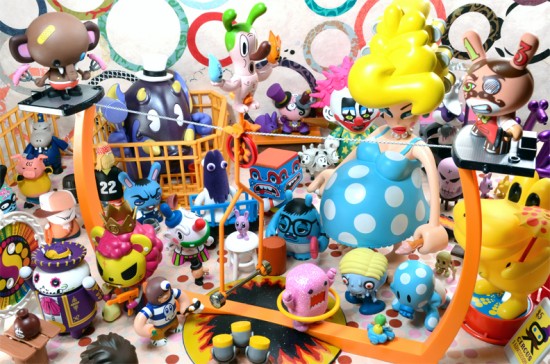 On darker days, it’s good to have a Ryan Roberts. The Nashville-based designer and photographer (who brought us this 2012 toy a day calendar) is readying to deploy a host of new toy vignettes and inventive holidays for 2013. Setting the scene takes time: there’s conception, sourcing parts, staging, lighting and more—all before the camera’s shutter pops open. With that kind of investment in pre-production, it’s nice to now see Roberts’ video side project in full motion.

“Adult Wims” is a play on Adult Swim‘s animated and ADD intermittent intermissions. It’s also a clever reversal of stop-motion animation, in which Roberts and his camera move and jerk around, while the subjects remain fairly stable. I love the enthusiasm here, and it’s cool to see a cross-pollination of toy art with video and music. Look for him this Saturday at DesignerCon in Pasadena. He’ll be the guy getting swallowed by his own sweater just like this, and he’ll have DVDs with 20 “Adult Wims” for just $5. Sweet.