Following quite the fever pitch, Red Hot Robot opened its doors for the Resin Collective, and the red dots started flying. Store owner Jason Kiningham was way ahead of the curve curating this show, which featured standout work from today and tomorrow’s hottest resin designers. Even a local Phoenix paper covered the show, re-interpreting Jason’s “lowbro” lingo as “way cooler than that boring museum crap” in their article, Anti-Toy Story.

Those familiar red (sold) dots were quickly adhered to Cris Rose’s Rotund’s Romp, Cris and Okkle’s Happy Joy Bot, Le Merde’s Vanfar, Hello, Brute’s Danny, Makkinoso’s Evil Spike, WeKillYou’s William Palerne and pretty much all pieces by Arbito and 2Petalrose. The dotting continued into the night, as fans circled around the display and marveled at the diversity of the medium. 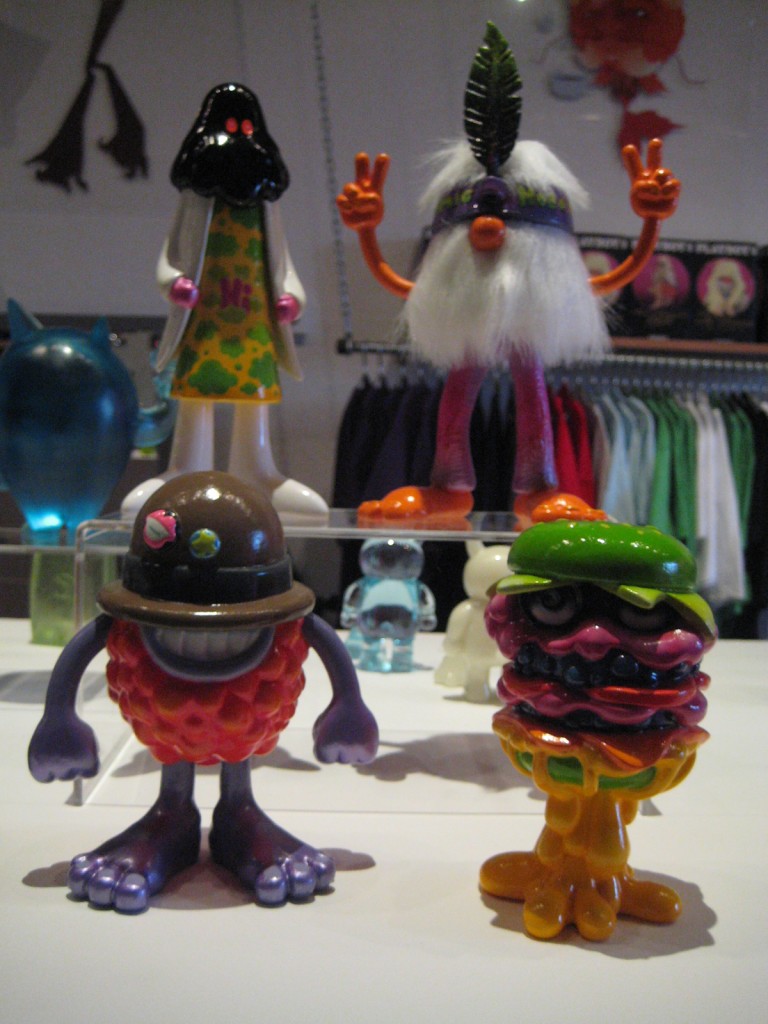 On separate ends of the table were the show’s lightest and heaviest pieces. Given its size, Phoenix-based artist Spencer Hibert’s hollow hand-cast Miigis wowed everyone by being feather-light. In the far corner, former-furniture-designer-turned-toy-artist Monty Lawton’s heavyweight gold-leafed and metal-faced Madpusses could have broken your foot if they fell. Goldenpuss and Metal-Faced Madpuss were two of several figures sculpted by the uber-talented Julie B of Pretty in Plastic. She came down from LA to support the show, which included her own collaborations with Gary Ham, Brian Castleforte, Travis Lampe and Scott Tolleson. Gary had the monopoly on sexy female figures with Choco and Mint, his follow-up to Peppermint in the Morsels series. Brian’s Wack-ed was resin coated in an ever-changing magic metal, which makes it sort of alive. Scott removed Major Minnow’s hat for some more magic. Moving from magic to luck, Scott and his wife, Kathy, were big winners in the night’s raffles, each scoring a piece by 17FEET (available now at Red Hot Robot and Food For Feeters) and a keychain by Kill! Julie also got one of the Feeters, but was less lucky at guessing which figure I purchased, which makes me wonder what people perceive my taste to be like…Hopefully playing 20 questions with me was less uncomfortable than working with Kanye West, for whom Julie is currently making a resin figure. 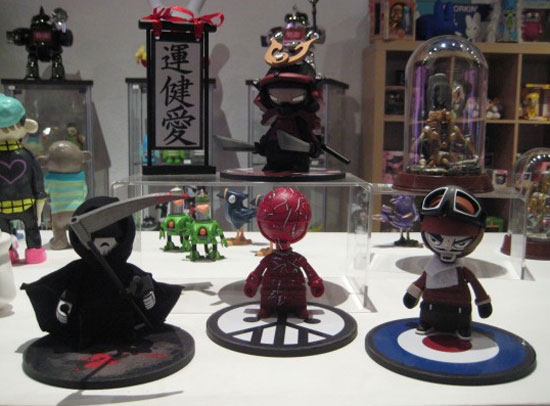 So back to the question of the night, why resin? Scott gave me two answers. He gets tired of looking at copious boxes of all his vinyl creations; the lure of a small run was appealing. Also, when he gets an idea (ie. Doc Von Block), he just wants to go for it; vinyl takes time. Which is not to say that resin is a quick and dirty medium by any means. One need only look to Cris Rose’s X-Customs or 2Petalrose’s production-quality pieces to see the precision possible with resin. And it’s not always small either: Hello, Brute and Arbito had some of the tallest figures of the show.

I’m told that clear resin is a skill unto itself, and Jason astutely arranged Argonaut Resins‘ translucent tinted El Diablo and CellPhonesKill next to Uamou’s figure sets. As we’ve come to expect from Argonaut Eric, the figures were all flawless. And Uamou’s looked almost like glass; one piece had a floating heart in exactly the right place. The only bummer of the show was that Tan-Ki didn’t send one of his beautiful Ki-clear resin pieces; instead he had a pair of NFS DIY Ki-Toys.

The monster contingent was provided by Monstrehero, Uh Oh Toys (who had a new proto), Imagination Asylum,  Spooky Parade and Kill!, who had a studio and store nearby chock full of his own resin pieces (and those of the recent Kaiju Blasphemy show which I’ll cover separately). 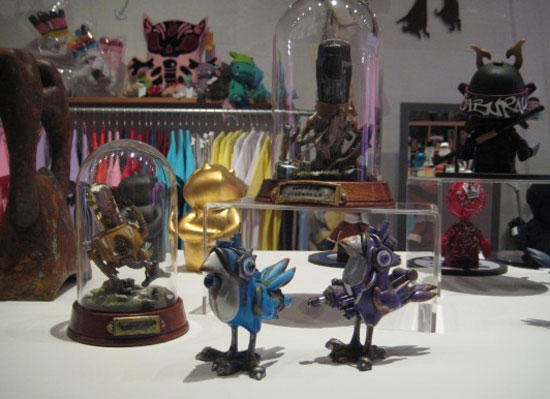 It also seems like everybody’s got a lot going on and coming up. Regrettably, I spent a while talking with Spencer H and Tara Logsdon, both of whom have exciting projects in the works, only to lose the photo I took (see photo-collage below instead). Spencer’s project is in the secret stage and Tara will be showing her hand-sewn bears at a gallery in Japan. Scott T’s got a show coming up at Rotofugi. Le Merde’s got a show coming up at Super7. 2Petalrose is working on their next figures. Arbito will be releasing small editions of the sold-out figures from the show soon (and there are currently $10 giclees available). Das Mo is going into production with Patch Together. Dave Pressler will soon see his labor-of-love, Mark Ryden’s YHWH, released in vinyl. Cris Rose is cooking up something great for custoMONDAY later this month…And so on.

Never before has there been an all-resin art toy group show of this proportion and significance. Over the course of the evening, people chatted about how it is the “right time” for resin. The recession slowed down factory (vinyl) production and simultaneously gave collectors pause to rethink buying pricier products. Meanwhile, a handful of art stars rose to fame with the aid of companies and stores, leaving many artists on the periphery. Is resin the solution? Well, anyone with artistic intent can learn the process and pass on the cost savings to their collectors. This results in a vibrant art toy community, the likes of which we haven’t seen in years. People flew in from different states to check this out. Big ups to Kyle, Kill! and Crspy for the hospitality and company and to all the artists,  Jason, Elliot and Red Hot Robot for putting on a killer show. 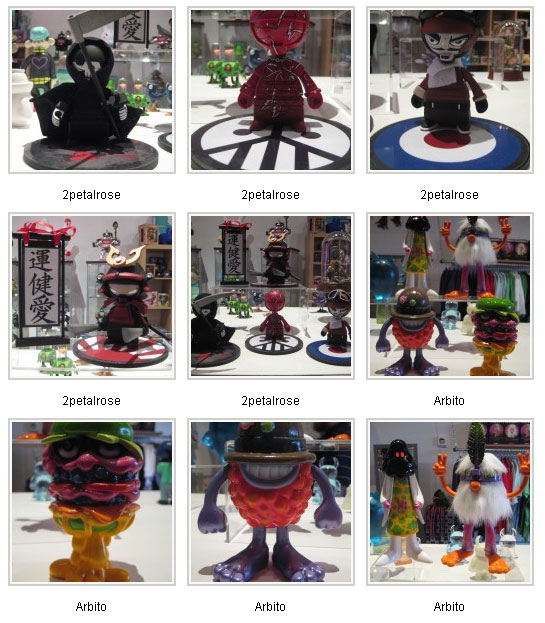 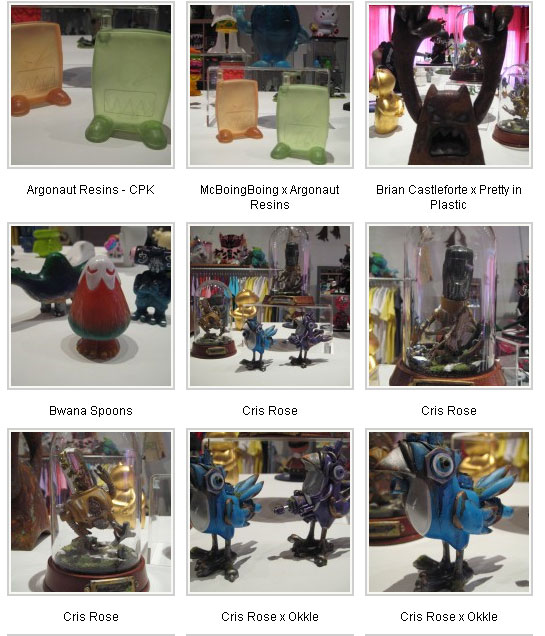 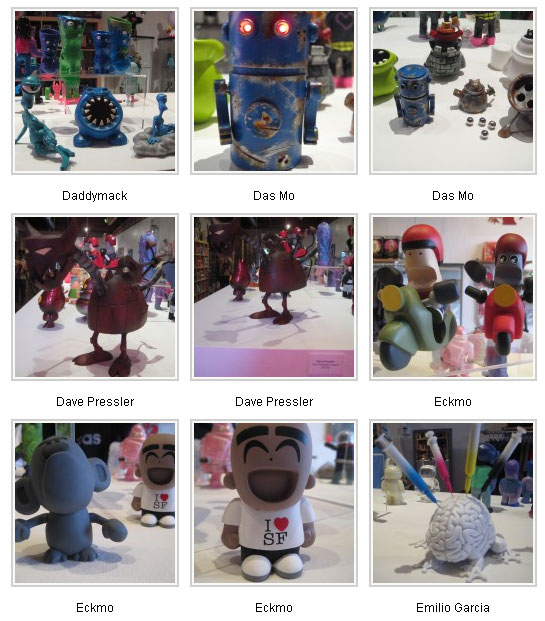 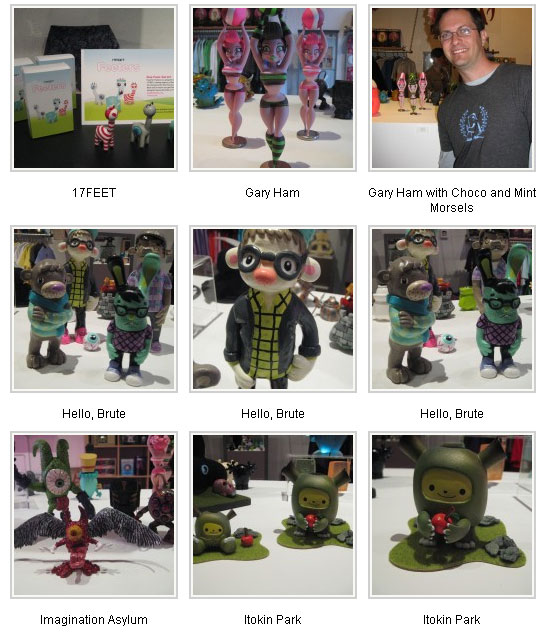 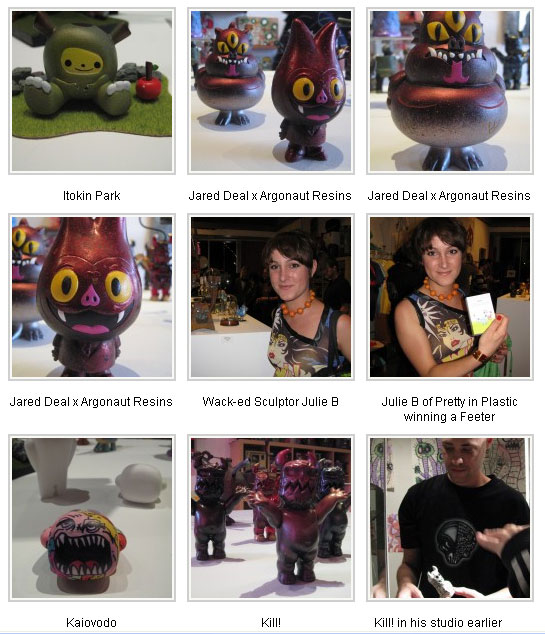 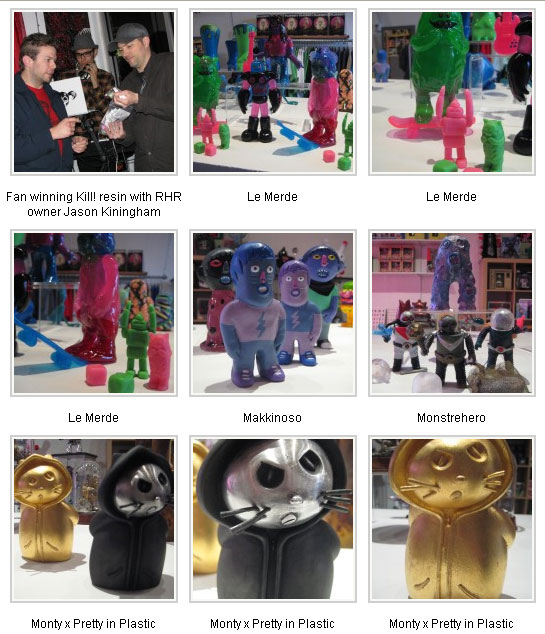 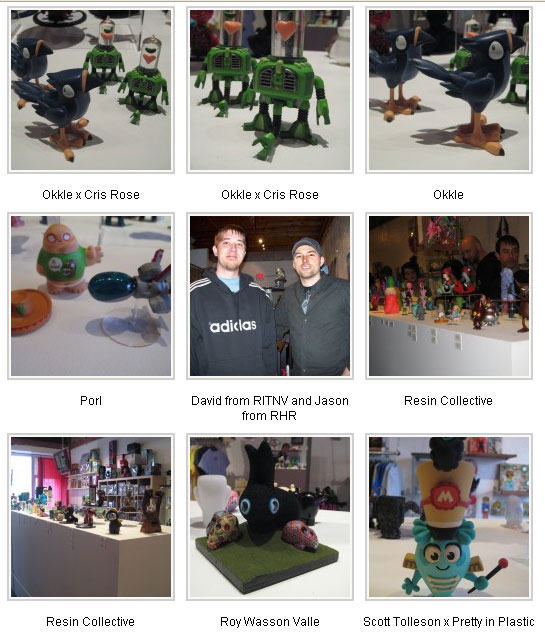 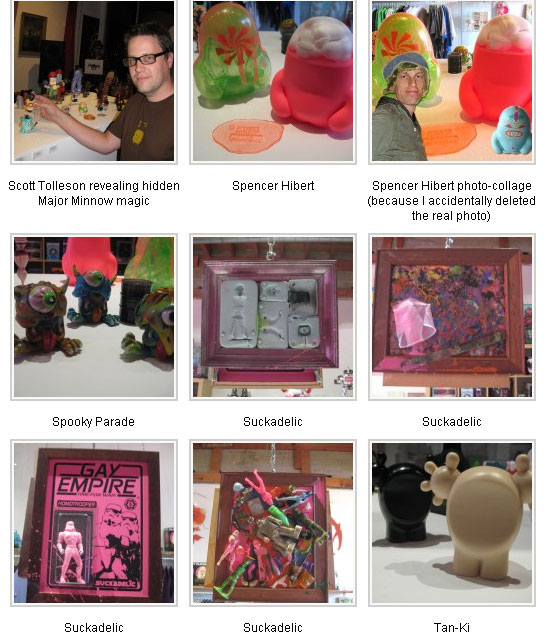 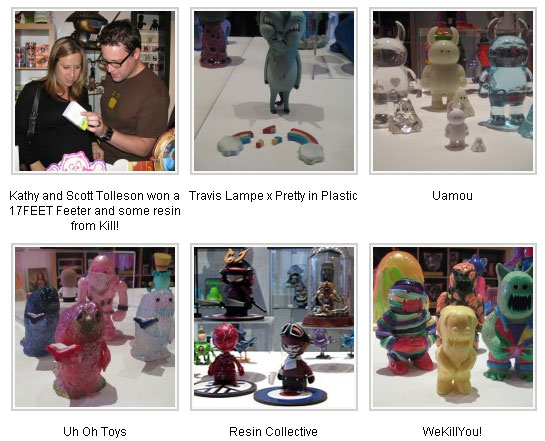 [The preceding story was written by me for ToyCyte. It was originally published in April of 2009.]