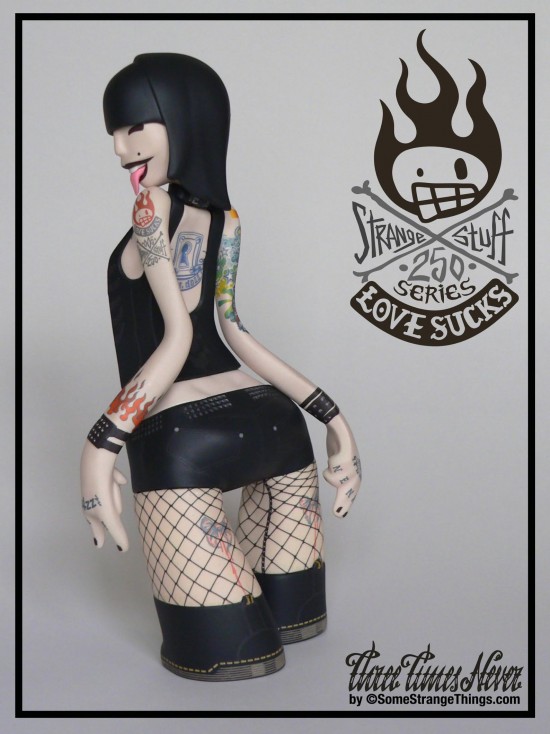 If you spliced together some DNA from Jamie Hewlett’s Tank Girl, Spencer Davis’ Booty Babes, and The Suicide Girls’ tattooed pinups you might just get Marcos Lorenzo‘s goth punk toy ThreeTimesNever. With her punk rock posturing and inked resin skin, this isn’t your average vinyl toy factory monkey. Plus, there’s a twist that goes beyond her torso: ThreeTimesNever is an edition of 250 pieces entirely handcrafted by one guy in Barcelona, Spain. 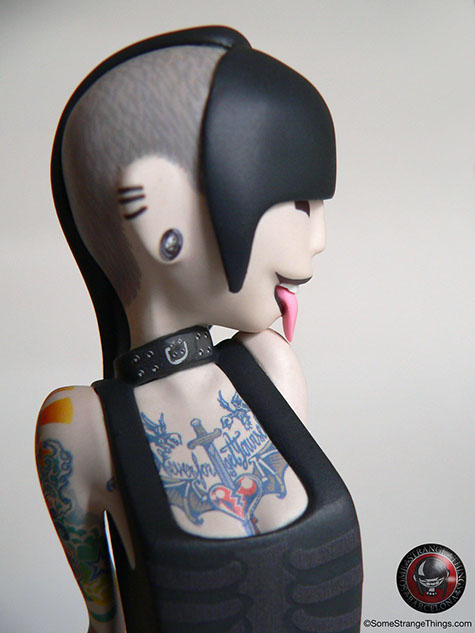 When news of this figure hit my inbox, I had a lot of questions: 1) What’s the artist’s interest in goth, tattoo, punk toy subculture? 2) Can an edition of 250 figures this clean and detailed truly be handcrafted in a home studio in Spain (vs. a factory in China)? 3) If this toy came to life, what music would she be into? Luckily, Marcos was game to discuss. 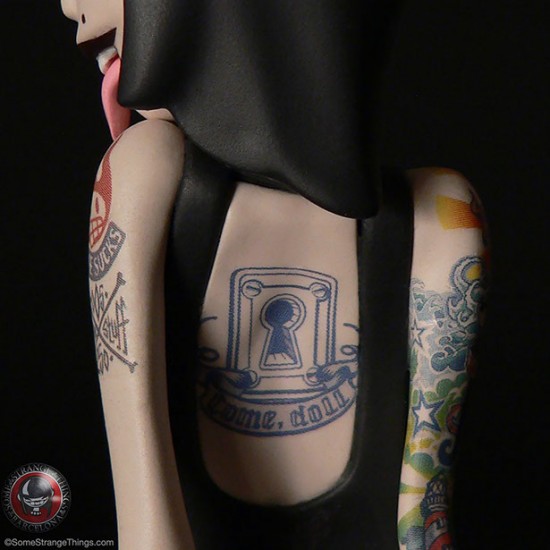 JB: Why did you decide to do a series of alternative girls, in particular?

ML: I’m not too interested in sculpting monsters or musclemen. I’ve done it before, but there’s not so much to be learned from it. I’m more interested in women and women’s minds, and my art is based on that and around the concept of the perfect imperfection. By mixing those concepts, I came to the idea of beauty redefined, or as the Suicide Girls motto says: What some people think makes us strange, or weird, or fucked up, we think is what makes us beautiful. 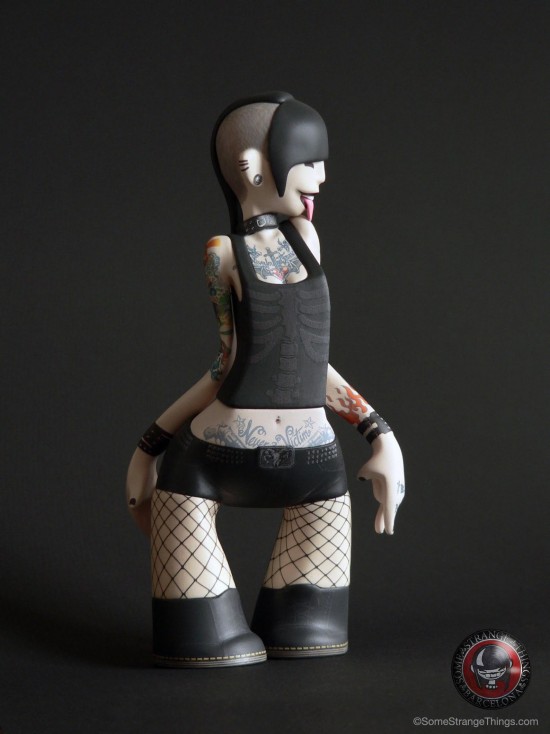 What about all the tattoos? This punk toy is very different from the tattooed Tokidoki Barbie!
I wonder about the ways women’s minds work: for example, why somebody would tattoo a stitched-open scar around her nice legs. In thinking about this, I realized that tattoos allow people to sculpt both the external look and the internal spirit of a person. The anthem of ThreeTimesNever and the forthcoming figures in the Some Strange Things series could be phrased as: Your skin talks about you, about your life, about your passions, and your fears. Sometimes the story is written by you, sometimes by your mistakes, and sometimes it’s written by strange people. But let it talk, and make it loud. 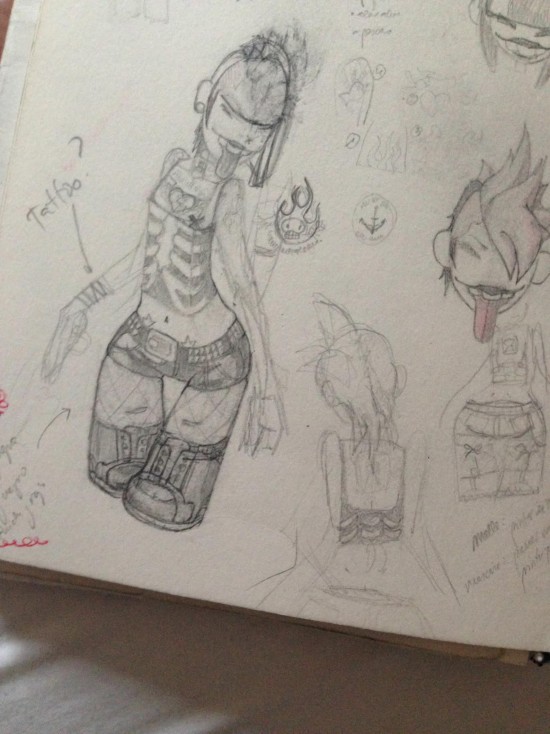 Who and what influenced or inspired you in making this punk toy?
I’m always interested in the mix of a strong look and an attractive, special mind. There are a lot of influences here. Stieg Larsson’s Lisbeth Salander is a great one for me, as well as Emily The Strange. Alternative models like Dani Divine, Ellegy Ellem, Miss Loulou, Psylocke, Starfucked, Victoria Van Violence, Lauren WK and Suicide Girls like Radeo… and many others. Toxic Vision is incredible, her clothes are amazing, and her photo style is very, very strong.
At the design level, I like McBess’ girls and Ashley Wood’s Isobelle Pascha. I also love Tara McPherson’s art, but in this case, the artist herself is the model for me. And, of course, there is more than a bit of two of my former girlfriends in this sculpture. Well, there are some strange things out there, isn’t? 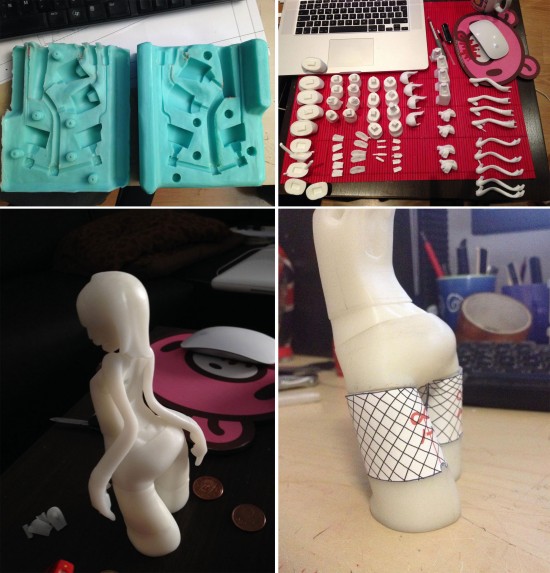 Can you describe your process?  You’re really casting and painting these at your home studio?
The process always starts with hand-drawing. I feel most comfortable starting my designs by hand, but soon I change to digital tools. I’m a traditional sculptor, but digital sculpting works very well with designer toys. I use Zbrush for the whole sculpting process, from draft to final production pieces. Then I print a master copy of all pieces with a 3D printer, and prepare them to build the silicon molds. Once I have the molds, I make the parts out of resin, and paint them with acrylic paints and varnish. About the decoration details, I design them in Illustrator, and I print them onto transfer paper on a white toner laser printer. It’s a very nice result. 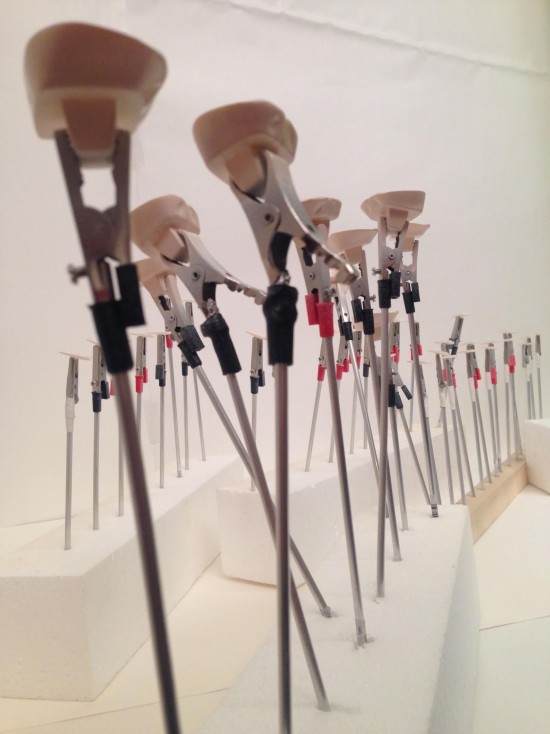 Wow, it really is! That takes a lot of work to make 250 figures piece by piece. I wanted you to talk about it specifically because I think people’s tendency is to immediately assume you’d have to do this in a Chinese factory. But since you’re the sole toy maker (like Pinocchio’s Geppetto), answer me this one: If this punk toy came to life, what music would she be into?
Hmm I suppose mainly Iggy Pop, The Clash, Misfits, and Sex Pistols hahaha. Nirvana and Jimi Hendrix, too. A bit of Motörhead and Marilyn Manson, but not too much. For relaxing, The Cure, David Bowie, Led Zeppelin, and Nouvelle Vague. 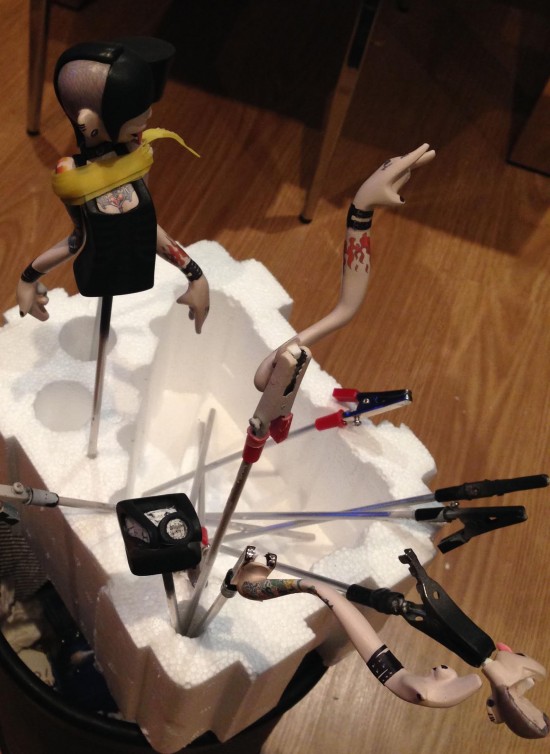 Awesome! So what do you do when you aren’t meticulously painting and tattooing toys?
For a lot of years, I worked as industrial engineer at a global company, but it was no fun at all. I decided to leave it all behind and start building my own dreams, just maintaining some freelance jobs as an industrial designer. For the last year, making designer toys has been my main activity. Let’s see how far I can reach in this world! But I’m very excited with this new collection. I think this is a non-return trip. 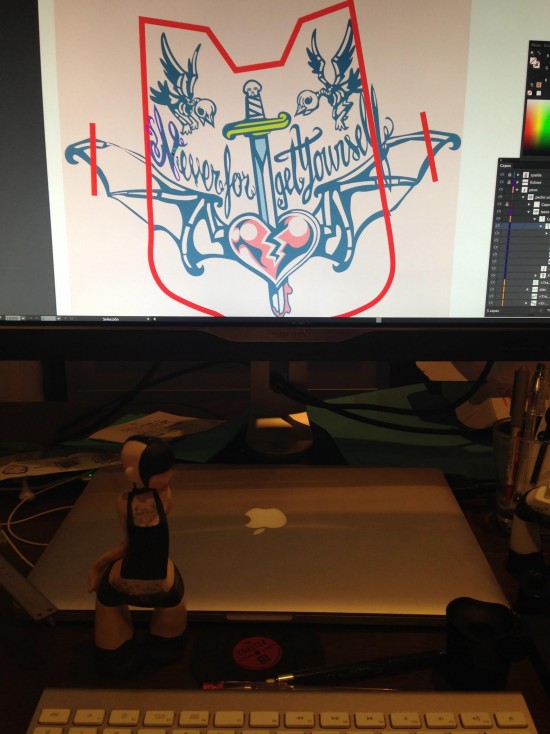 I wish you the best in your self-induced exile from the corporate world!
Readers, ThreeTimesNever is an entirely hand-made goth-punk toy from Barcelona Spain. She stands (on stumpy Doc Martens) 6.3 inches (160mm) tall, and Marcos Lorenzo is casting and painting her in an edition of 250 pieces for 150€ (~$164) each. I’m really impressed by the level of detail and individual process on this one! Pre-orders are open now at www.somestrangethings.com, and fulfillment begins in March of 2016. 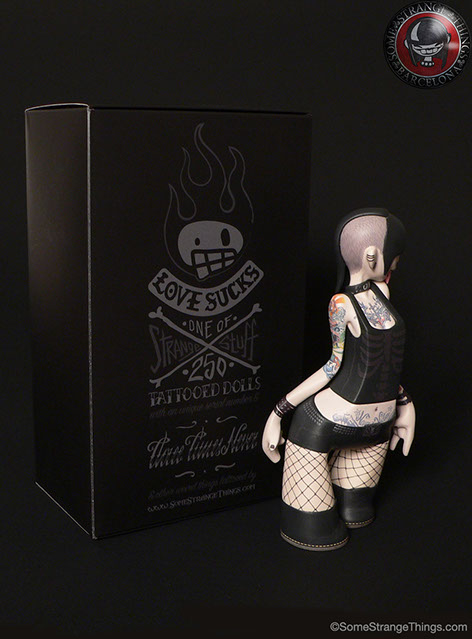