Gallery1988 really lived up to its meta description of “the nation’s number one destination for pop-culture themed artwork” this past weekend by presenting a double dose of cult toy craziness across its two California galleries. In Los Angeles, the 3 G show featured 2D art inspired by Ghostbusters, Gremlins and Goonies. Up here in San Francisco, G1988 tasked artists with an extra dimension. Much like how The Cosby Show spun off A Different World, on Saturday night, the successful Crazy 4 Cult series gave birth to the first Crazy 4 Cult: Customs. When’s the last time you walked around a gallery and could identify the inspiration for a work of art and/or the artist? [Above, left to right: The Big Lebowski by Cristina Paulos, The Nightmare Before Christmas by Reactor-88 and Back to the Future by Task One.] 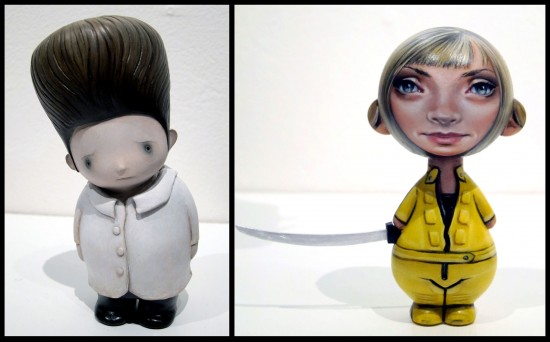 Crazy 4 Cult: Customs merges the usual suspects of the toy customizing scene with regulars on the gallery’s roster. As a result, we get treated to seeing a small, sword-wielding Kill Bill sculpture by Ken Keirns and a rather excellent forlorn Precious Moments version of Eraserhead by Paul Barnes. 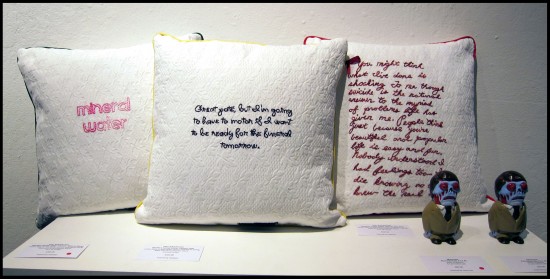 The thinking outside the (TV) box award goes to textile artist, Ellen Schinderman, and her embroidered pillow triptych tribute to Heathers. Having a cushion cross-stitched with “corn nuts” or “mineral water” is like sending a secret signal that only a small percentage of people who sit on your couch will understand. The sheer joy of their recognition would completely outweigh all the furrowed brows, though. Seeing Heathers represented here made me wish another artist had tackled it figuratively, in addition. Ken Keirns is the obvious choice (I swear he’s painted Winona before for a G1988 show…). Because I just happen to know a talented toy artist who can recite the entire Heathers script, I hereby nominate Jon Knox to handle this matter in Crazy 4 Cult: Customs 2. (The show is expected to become an annual attraction!) 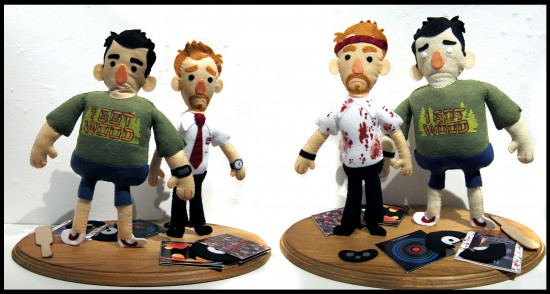 Working in 3D gave the artists freedom to create their works using the full 360 degrees. While Ellen’s pillows display different quotes on each side, Jen Rarey used the opportunity to give us “clean” and “blood-spattered” versions of Shawn of the Dead. 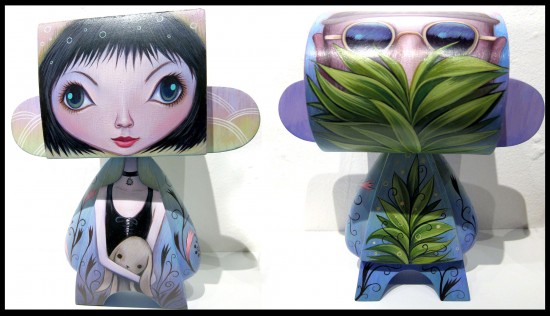 Jeremiah Ketner creatively used both sides of a DIY Mad*L toy to render distinct characters from The Professional. If art is an investment, this is two for the price of one! 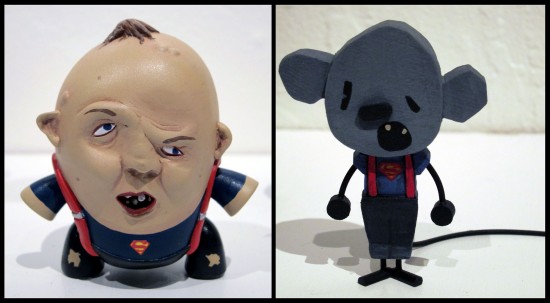 One of my favorite aspects of these kinds of shows is seeing how different artists interpret the same subject.

Andrew Bell customized his own popular O-No Sushi toy in the form of Sloth from Goonies. (I’d love to see this as a production figure. Maybe STRANGEco will produce a Crazy 4 Cult toy series ala Vivisect Playset?) Because Daniel Elson has shown his 3D(-ish) mice in other G1988 shows, I immediately knew he was the artist behind this original Sloth. 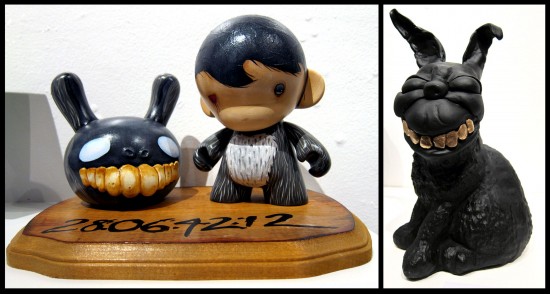 I was pleasantly surprised to see several of my personal favorite movies represented. Yosiell Lorenzo cleverly decapitated a Dunny for Donnie Darko, while Peter Gronquist carved his Frank the Bunny out of concrete.

Two of the best Michaels in toyland were on the same wavelength. Art Army General Mike Leavitt and impeccable dresser Mikie Graham both took on Harold and Maude with terrific results.

Due to their bright orange faces, you can spot an Oompa Loompa from across a room. 64Colors and Eric Tan both drew inspiration from Willy Wonka. 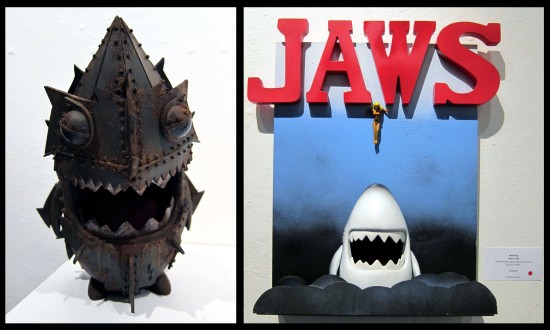 Finally, what would a film/art hybrid show be without a Jaws piece or two? Dril One and Keith Poon each took Keith’s original Sharky toy in different directions. Both pieces sold opening night. Speaking of the non-artists, the steady crowd was a mix of art collectors, toy hoarders and film buffs. It’s nice to see the scenes integrated. Crazy 4 Cult: Customs (and all the red dots on the walls) is as a reminder that toys can hold their own in the larger art scene. You can purchase available pieces online here. The work will be on display through September 24th.