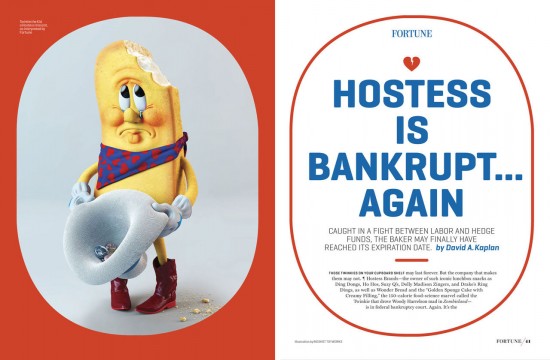 The digital illustrators at Bigshot Toyworks were asked to re-imagine Hostess’ mascot, Twinkie the Kid, for a Fortune magazine coverstory. The feature is called “Hostess is Bankrupt … Again” and we’re unlikely to be seeing a 3D toy version of the hard luck mascot anytime soon.  Fortune’s tumblr quotes the artists:

“We had a great time working on this project. This assignment gave us a chance to play around with an iconic brand mascot, while illustrating the current environment in the food industry. Since ‘Twinkie the Kid’ is such an iconic character in American advertising, we wanted to be respectful of his history and not make him appear injured or overly abused. After a few rounds of designs, I feel we managed to really capture the point of this article.”

Wow, we sure have come a long way since Twinkie the Kid announced “You get a big delight in every bite!”

Twinkies were invented by James Alexander Dewar as a Depression-era treat while managing the Continental plant in suburban Chicago. Tens of millions were sold each year. In the 1950s they were a sponsor of Howdy Doody.  Later, there was that preposterous “Twinkie defense,” the idea that eating too much sugar constituted a defense against murder. Currently, Hostess is bankrupt for the second time this decade.

That’s the “fun” part. The rest is about politics and capitalism, but written with great wordplay. Start here: “Those Twinkies on your cupboard shelf may last forever. But the company that makes them may not.”