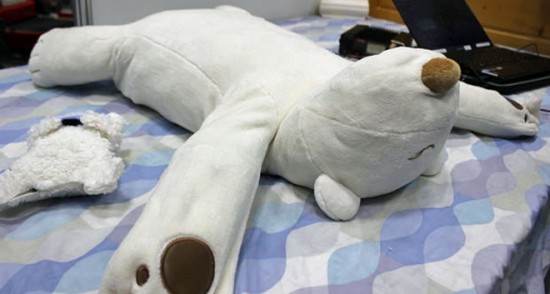 The Tokyo-based International Robot Exhibition (now in its 19th year) is notorious for unveiling some pretty WTF BOTs. Glancing casually passed the photo above, you’d probably think dismissively: ‘oh, here’s one of those gigantic stuffed animals you win at the Jersey Shore’. WRONG! It is a robotic polar bear pillow that’s been designed to help the “more than 2 million patients” (in Japan) who suffer from Sleep Apnea (snoring) Syndrome. And you’re supposed to fall asleep on it. 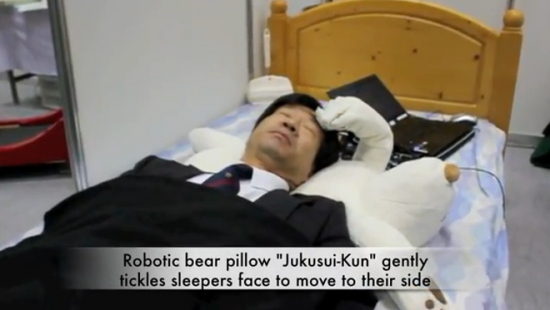 It might be difficult for us obese, Old-Navy-clad Americans to see past the salaryman sleeping in a business suit on a twin bed, but move away from that mise-en-scène and what you have is a stuffed animal that will reach over and smack you in the face for snoring.

Dr Kabe’s Jukusuri-Kun works through the person asleep wearing a similarly cute pulse-oxygen meter attached to the hand which sends readings of the amount of oxygen in the blood to a terminal running a program with the persons vital statistics pre-programmed in. To eliminate the intrusion of wires preventing a good sleep the team also developed a cordless technology which uses the human bodies natural conductive properties to communicate with a conductive sheet that lies under the bed sheet. When the oxygen level decreases in the patient resulting in the snore level increasing it triggers the bear-pillow’s hand to move towards the sleepers face. Gently brushing the face causes the person to then turn from lying on their back to moving onto their side, a more conducive postion for a sound, snoreless nights sleep. 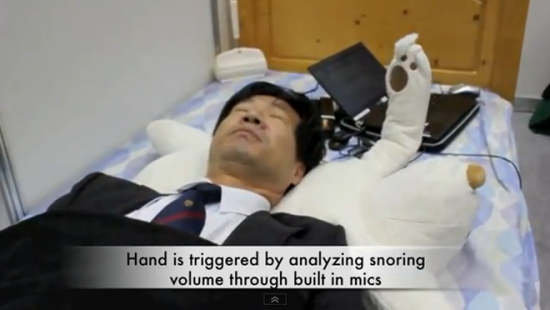 You better not piss off that polar bear!