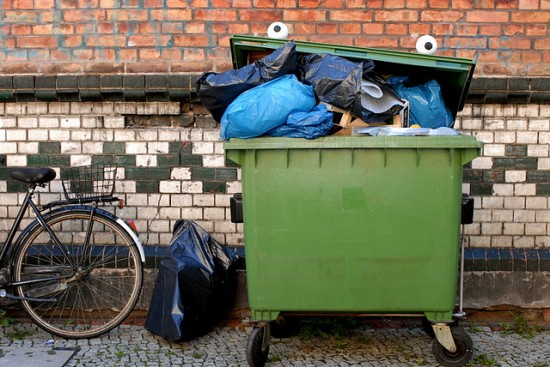 According to the Chinese Zodiac, 2011 is the year of the rabbit. According to my own observations, 2011 has been the year of the scavenger. I’m not talking about hyenas and jackals, though you can picture them if it helps. I’m talking about the idea of cooperative scavenging (explained here; see also the Occupy movement), and the ongoing struggle to earn a living. Youth culture isn’t ‘dumpster diving’ anymore because it’s hip to look poor. People are ‘freecycling’ because either a) they believe there’s already enough stuff in existence or b) they can’t afford to buy.

Enter the unlikely, utilitarian dumpster as an icon. Perhaps you’re lucky enough to still be employed? Well, you can align with the movement and still rep the scavengers from the comfort of your cubicle. These three designers bring the dumpster to the desktop for cubicle commandos. 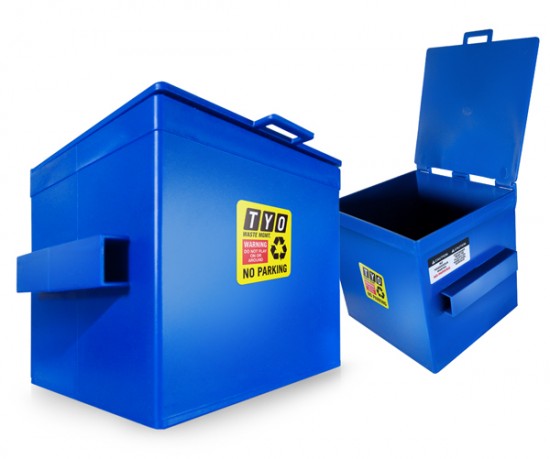 First up, the budget desktop dumpster by TYOTOYS for $14. Each 4″x4″x4″ blue cube can hold markers, toothbrushes, lucky bamboo and really, whatever you want. The look is not complete until you intervene by adding your own tags and stickers. Finish it off with a fleet of DIY freight trains and box trucks from TYOTOYS. Bonus: I met Phil, the company’s founder, and he was a nice dude. 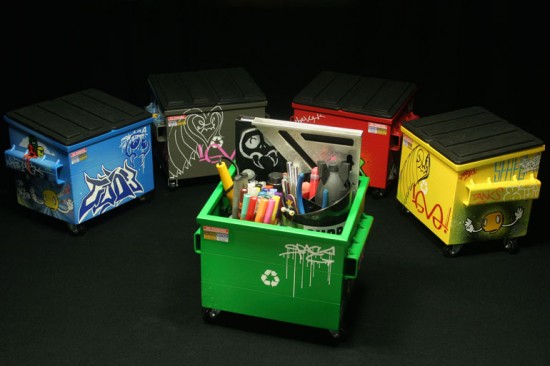 Moving up a notch in the dumpster hierarchy: mini dumpster sculptures by Steelplant. Designer Ryan Christensen welded the 8.5 x 11″ dumpsters from 16 gauge steel. They weigh 8 pounds each when empty, and are for the true dumpster connoisseur. Steelplant’s dumpsters look great as planters and make sweet stash boxes, but these garbage cans don’t come cheap: Blank front-loading dumpsters in four colors go for $149 here and hand-painted, graffiti-covered one-off dumpsters are $250 here. 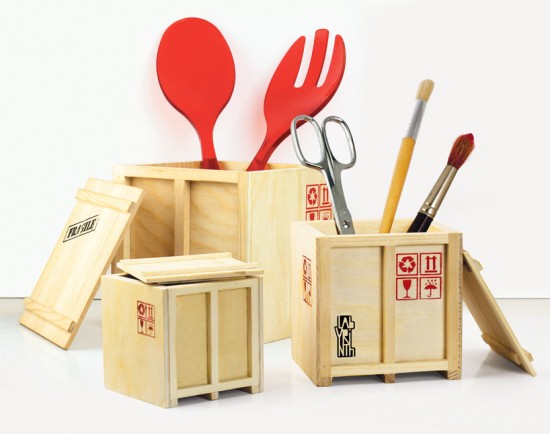 Finally, it’s not quite a dumpster, but it’s close. Labyrinth Design Studio from Spain created this series of three mini cargo crates. The nesting wooden crates can hold various tools and implements for a look that says ‘cargo chic’! Buy several sets and create a loading dock diorama on your desk. Then, gesture disapprovingly at your coworker’s iPhone docking station and mutter, “You call that a dock?” Labyrinth’s mini cargo crates are $55 here.