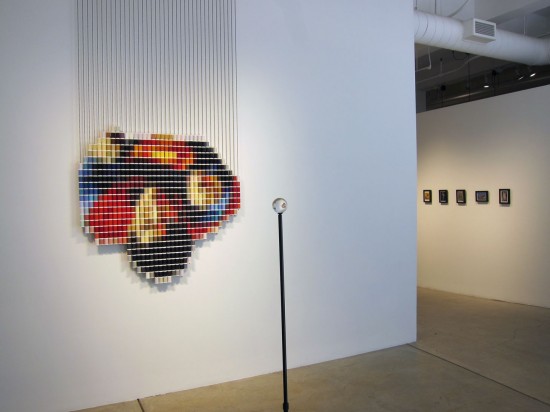 If you enjoyed yesterday’s iconic works of art recreated with balloons, here’s something from a similar “spool” of thought. Devorah Sperber breaks famous paintings down to their ‘pixels’ and then recreates them using spools of thread. On my way to see David Choong Lee’s show at 111 Minna, I saw Sperber’s Superman (above) through the window of Catherine Clark Gallery. Naturally, I went inside to see more. 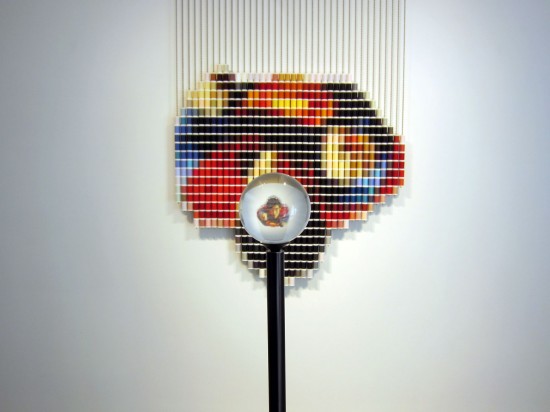 Sperber created Superman out of 690 spools of thread. By itself, it’s a very low resolution image and it might be hard for some folks (e.g. people who don’t read/write daily blogs about toys, art and pop culture) to tell what it is. 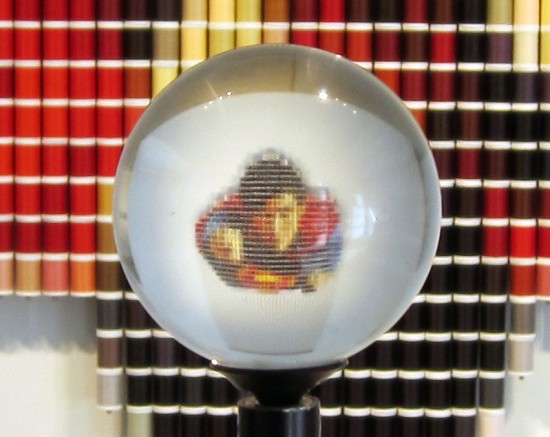 Yet when Superman is viewed through a glass sphere, the thread spools form a recognizable image and convey “how little information the brain needs to make sense of visual imagery it has already been exposed to.” And also that “there is no one truth or reality, emphasizing subjective reality vs. an absolute truth.” 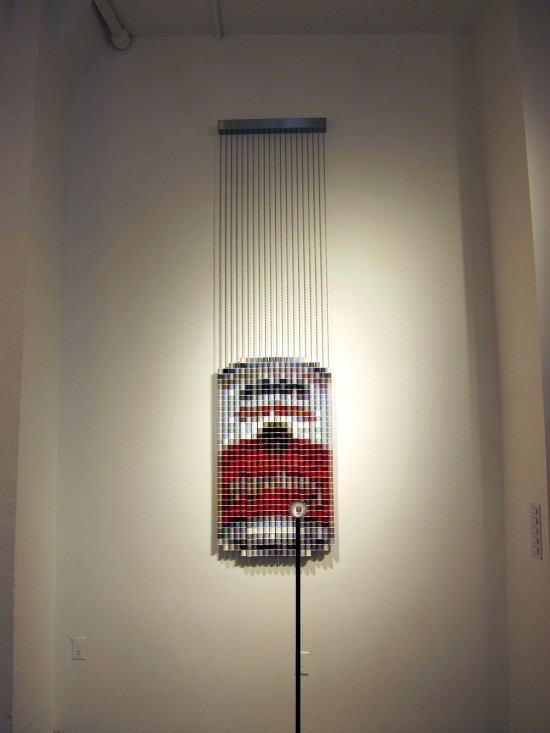 I am interested in the link between art, science, and technology, how the eyes and brain prioritize, and reality as a subjective experience vs. an absolute truth. As a visual artist, I cannot think of a topic more stimulating and yet so basic, than the act of seeing–how the human brain makes sense of the visual world.

Click through for more Sperber, more Warhol and the Mona Lisa recreated with 1,482 spools of thread. 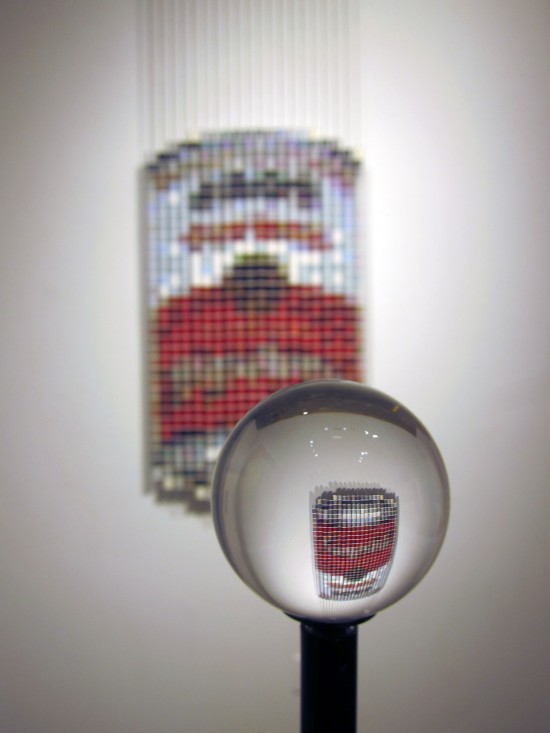 My interest in the biology of vision grew from my desire to understand how viewers experience my work. The thread spool installations illustrate specific visual experiences related to the biology of vision such as: how the human eyes and brain process sensory data– Photons bouncing off the spools of thread reach our eyes where they are turned into a pattern that is sent to the primary visual cortex where the rough shapes are recognized. The pattern is then sent to higher regions where colors are recognized and where thread spool identities are encoded along with other knowledge we already has about thread spools. This direction of flow is called: feed forward, meaning the data is moving from bottom to top (eyes to brain). 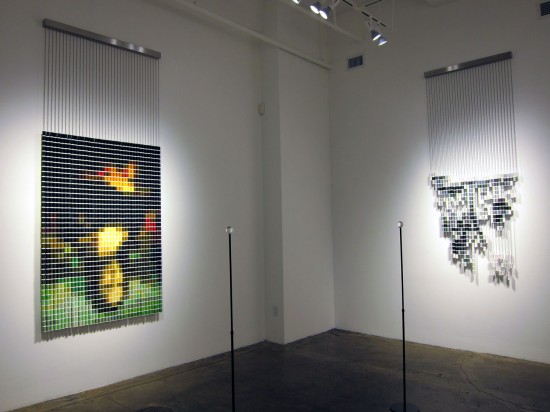 Bundles of nerve cells carry information. Traffic flowing from top to bottom is called feedback or top-down processing. There are 10 times as many nerve fibers carrying information down as there are carrying it up. So what we see is based on what neuroscientists call “top down processing.” And what we see depends on the framework built by past experience that interprets raw data. 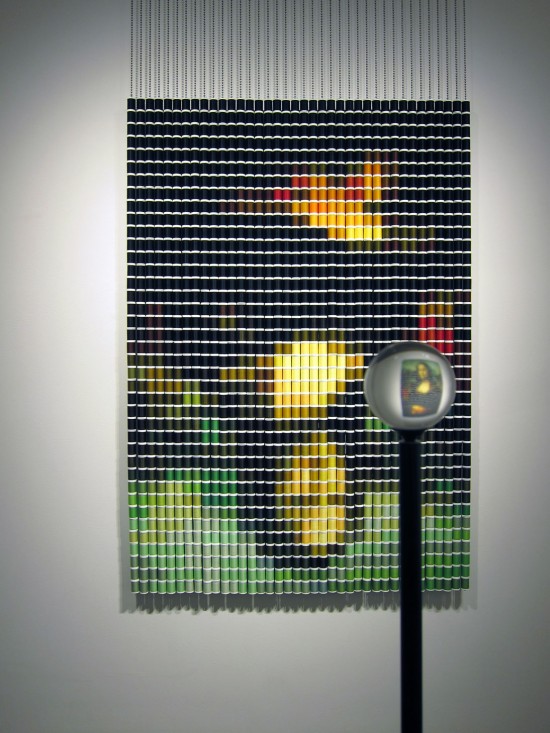 "After the Mona Lisa" (1482 spools of thread) by Devorah Sperber

When the top (or brain) is convinced it knows what it is seeing (in this case, initially fixating on what appears to be a random arrangement of thread spools), the bottom level of data (the recognizable portrait) is overruled. This may explain why my use of thread spools create such a jolt or ‘WOW” experience when the viewer finally sees the representation imagery in the viewing sphere, as the brain abruptly shifts focus from the individual spools to the whole recognizable image. 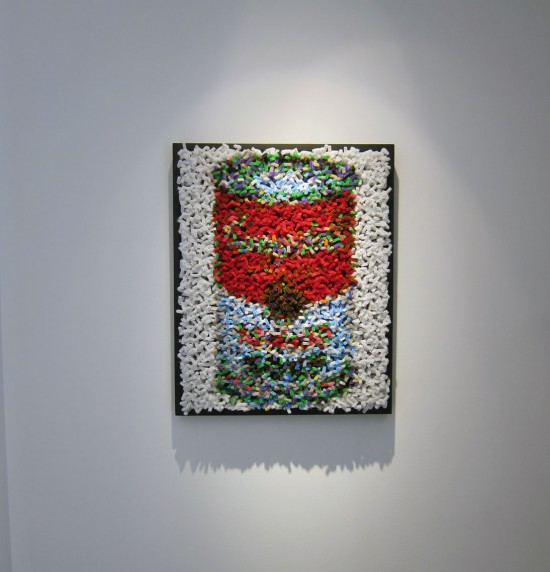 The brain can only hold or assemble one image at a time, so its initial fixation on the individual spools does not allow the recognizable portrait to emerge until the thread spools are seen through the viewing sphere or from a significant distance. However, once the viewer “sees” the image in the thread, the brain can shift back and forth from focusing on the individual spools to the whole recognizable image. And once the viewer “knows” the image is visible in the thread, he or she can not erase it. Thus, these works function as neurological primers, literally priming or teaching the brain to make sense of visual imagery it has not yet been exposed to. 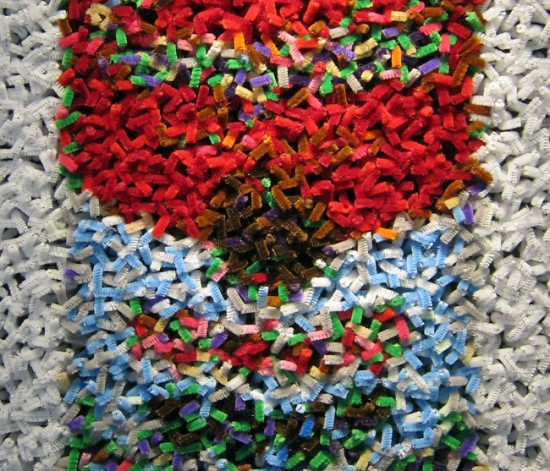 Overall, this work exemplifies my interest in visual perception, the link between art, science, and technology, repetitive processes, truth of materials, the feminist art proposition of bringing genres into “high art,” and the scientific systems theory which focuses on the whole as well as its part to gain understanding.