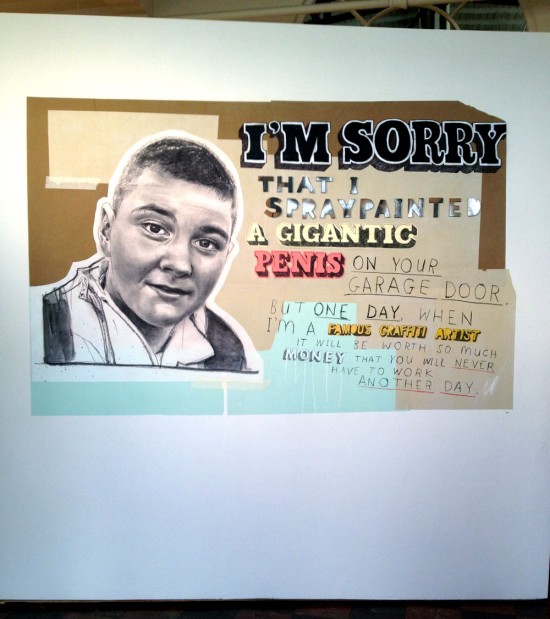 “I’m sorry I spraypainted a gigantic penis on your garage door, but one day when I’m a famous graffiti artist it will be worth so much money that you will never have to work another day.”

I love it! It’s the narcissist’s perfect apology: Say ‘I’m sorry,’ but quickly re-inflate the ego with some well-placed bravado. 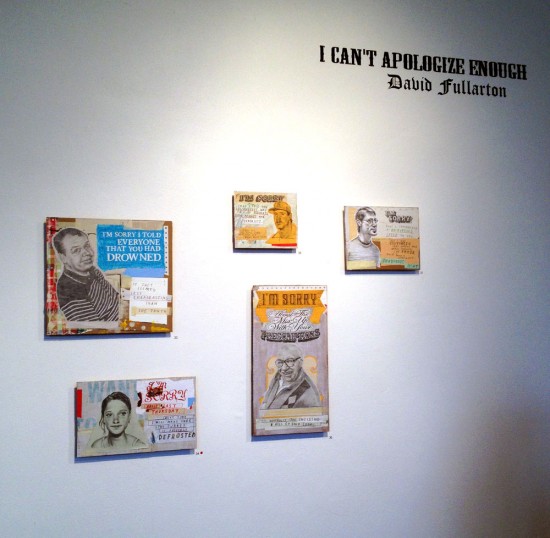 That interplay of apology and justification is at the heart of San Francisco artist David Fullarton‘s Apologies series. I’ve written about Fullarton previously, and I was lucky that he swam across the bridge to Oakland’s own The Compound gallery. His solo show I Can’t Apologize Enough, which opened this past weekend, is made up of more than 35 mixed media apologies, some larger work, a new mural, letterpress editions and an Apologize Here ‘audience participation area.’ 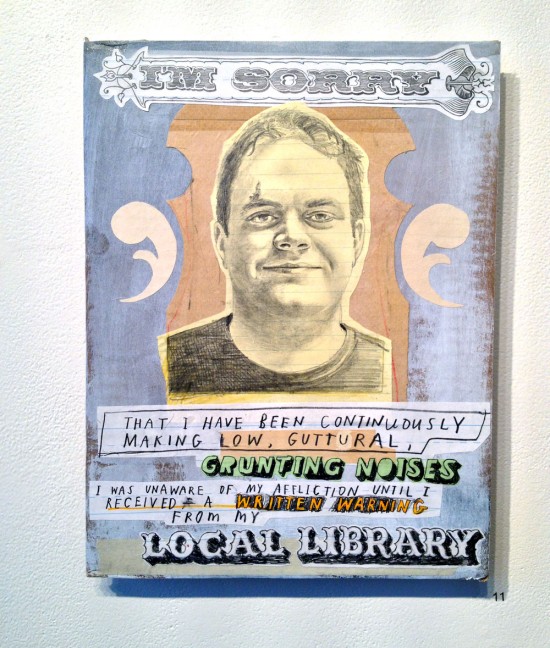 One of my favorite things about this work is  it’s not “there’s something for everyone” type of art. It’s specific. David Fullarton’s individual Apologies pieces may not strike a chord with most folks, but there’s one person (at least) out there who’ll feel totally validated and extremely understood by each piece. If you’ve ever felt that way about an artwork, you know it’s better than broad strokes. Maybe it describes you or someone you knew. Perhaps it jogs an old memory of this crazy thing that happened that one time. I guess I’ve met  many quirky people and I’ve seen some wacky things because I was walking around The Compound laughing knowingly. 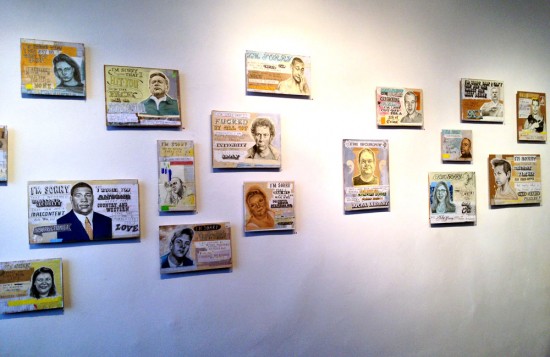 I picked up a piece (scroll down for it), and I’m still laughing. Laughter is A Good Thing, so I chatted up Mr. Fullarton to see if he agreed. Read on for our interview. David Fullarton’s I Can’t Apologize Enough runs through June 9th at The Compound gallery in Oakland. There are more original Apologies by David Fullarton available (and affordable) online here! 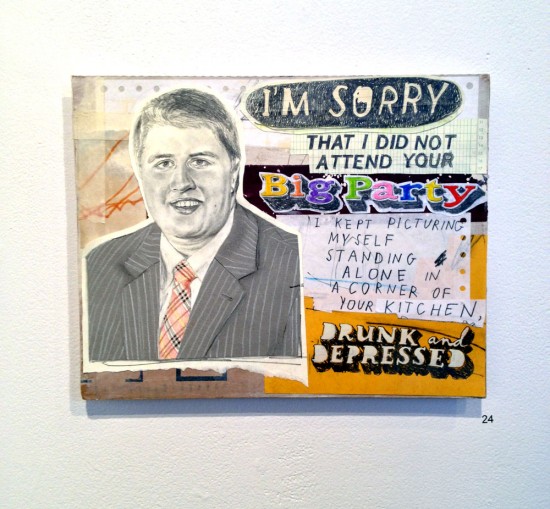 JB: What brought you from Scotland to San Francisco in 1995?
DF: My wife brought me. She was born and raised in San Diego, but had moved to London in the late 80s. We met working at the same place in Scotland, and she suffered through three Glasgow winters before demanding that we move somewhere with a more clement climate. The choice was London or San Francisco, which isn’t really a choice as far as I’m concerned. So we moved to SF in 1995. 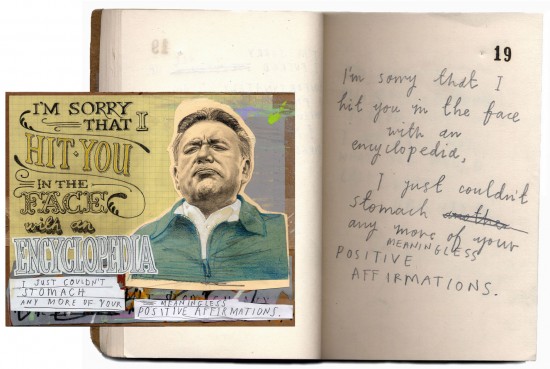 What inspired you to start apologizing through art?
I started working on this series in 2011 because I was kind of in the artistic doldrums, and I wanted something to inspire me and help me focus. I’d become very interested in drawing portraits from existing photographs and I’ve always used text in my work, so it all just kind of fell into place. I thought up a couple of apologies in the shower one morning, and then I just starting coming up with more and more and writing them all down, and I got really excited about the whole thing and never looked back. I’ve kind of post-rationalized that a lot of my interest in the apologies came from the difference between UK and US cultures. In the UK, people are constantly apologizing for everything, and here no one feels the need to apologize for anything. But really, it’s just an exploration into human nature and, formally, into the relationship between words and images. 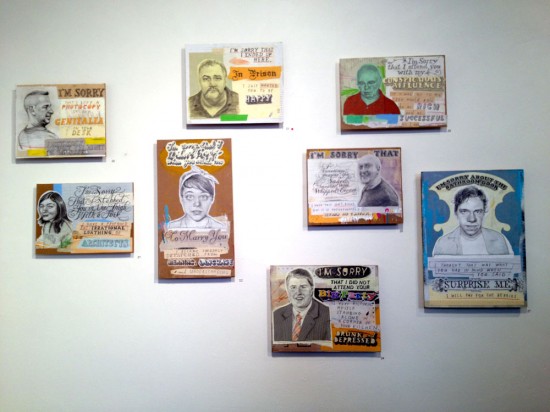 Do you tend to come up with the face or the apology first when creating a new piece?
Always the apologies. I have a little notebook where I write all the apologies down, and then I leave them there for a while and go back and choose the ones I really like. I have a ton of face pictures on my computer that I’ve found online (usually on random searches through Flickr), and I try and ‘match’ a face to the apology. I try and only use people’s amateur snapshots as the basis of the portraits and stay away from ‘proper’ photographers, although sometimes it’s hard to tell online. [editor’s note: That’s what Shepard Fairey said!] 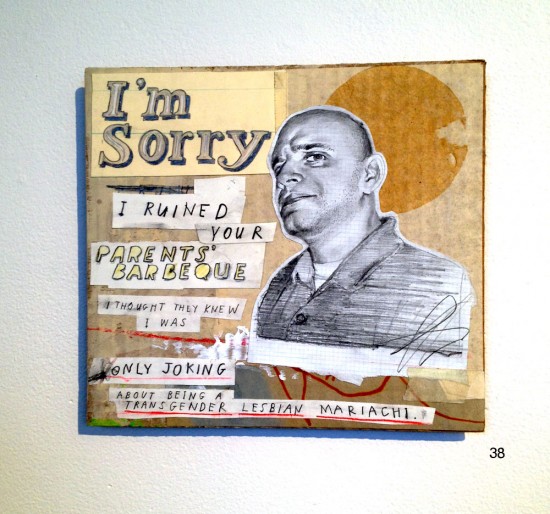 Does the pairing of portrait and apology ever suggest a more evolved “character” that may make a future appearance (and another apology)?
I hope they all suggest a more evolved character, but no, there will be no further appearances. They’re always one-offs. I do love the idea that you can imply a whole story or series of events from just a short phrase and a visual, and that’s been a common theme throughout my work–not just in the apologies. I like it when it seems like you’ve just dropped into the middle of an ongoing event or short story. And I like it that it’s the viewer’s imagination that fills in the events both before and after the artworks ‘snapshot’ moment. 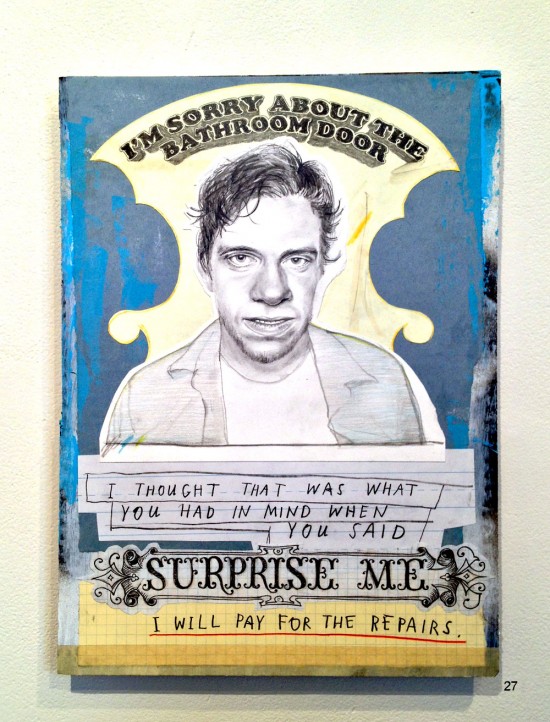 Can you describe how you keep track of your ideas and the elements in your works? (For instance, I’m imagining a sketchbook, a notebook, a shoebox full of paper swatches and type treatments…)
You imagination is very good! I have buttloads of notebooks and sketchbooks full of random scribblings, and I also have boxes and drawers full of old pieces of paper, postcards, books, cut out images, letters and stuff I’ve found in the street. It’s not at all organized, but I find that when I dig through it all and re-discover forgotten ‘treasures,’ it’s pretty inspiring. 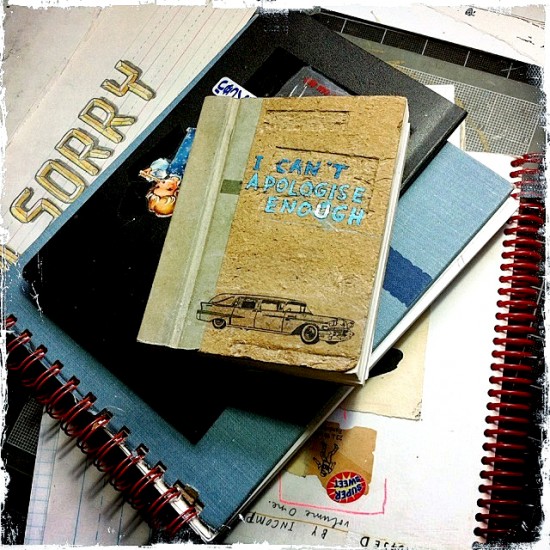 These apologies are being offered as an after-the-fact explanation/excuse. Why is it so hard to communicate our needs in the actual moment?
I think for most of us, when we do something wrong, it’s pretty hard to admit it, especially right at the moment in question. We’re often embarrassed and feel awkward or ashamed, which can manifest itself as a kind of defensive anger. Later, when we’ve calmed down and rationalized what we did, it’s easier to admit that we were wrong–but we tend also to have come up with some self-justification or excuse by then. Hence the structure of many of these apologies is “I’m sorry about blah blah, BUT….” It raises the question of what is the point of an apology? Is it to genuinely repent in front of the offended party, or is it to make the apologists feel better about themselves and what they did? 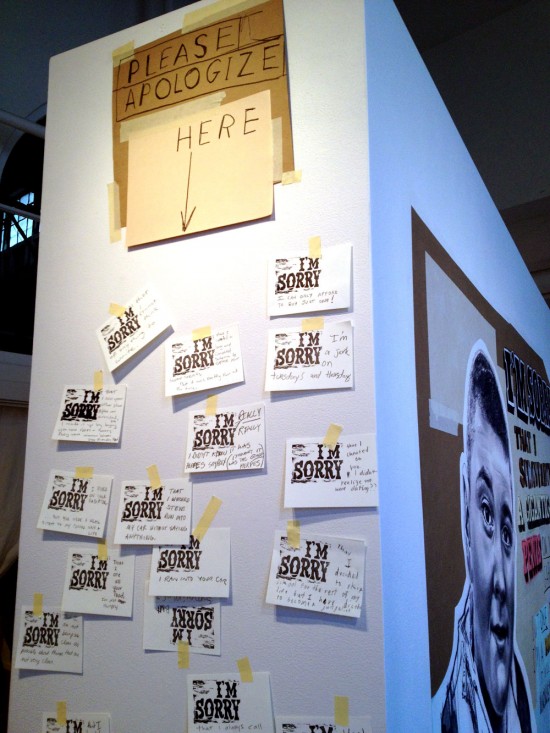 If you hit a parked car and made a very slightly perceptible dent, but no one saw you do it, would you leave an apology note?
I’ve done it. No note was left. I’m kind of ashamed to say it, but if I’m honest and I find myself in that situation again I’m pretty sure there will still be no note. I’m a pretty horrid person, really. 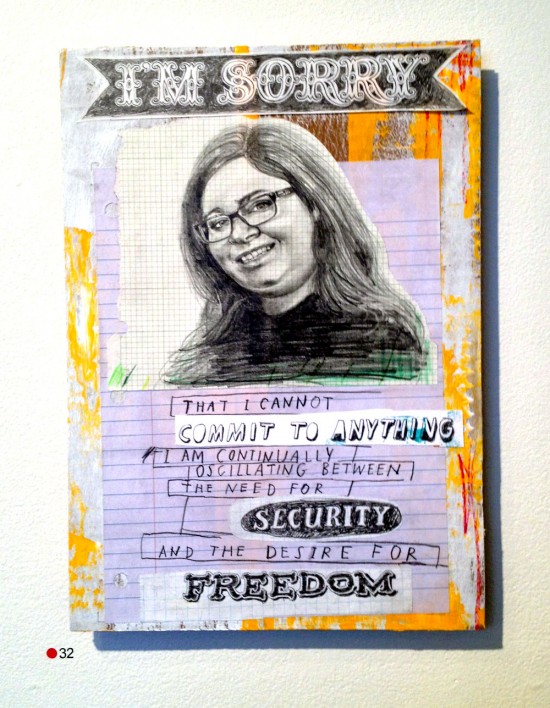 How will you know when the Apologies body of work is complete?
I’ve been wondering that myself! I imagine it’ll be like finishing an individual piece–I’ll just kind of instinctively know I’m done. I thought I might be done after the show at The Compound. But then I thought of an apology that I really liked just the other day, and wished I could have drawn it up and put it on the wall, so I think they’re going to keep on coming for a while yet. 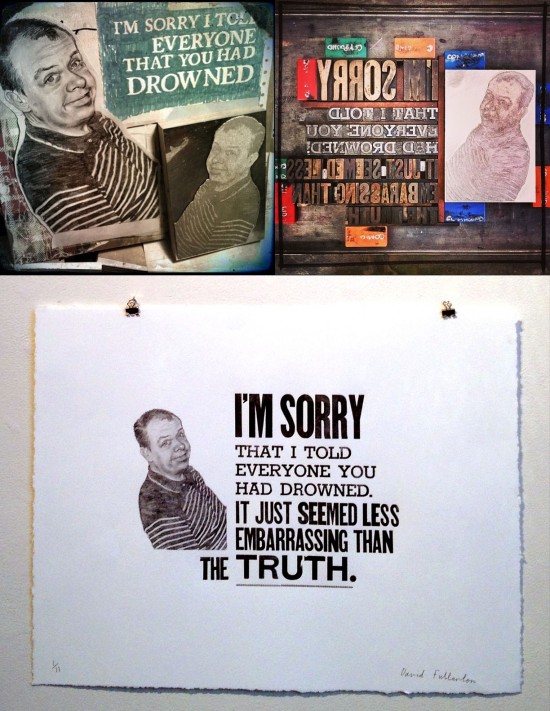 Yay! Do you like making art that makes people laugh?
I have a kind of complex relationship with the humor. Yes I like it that people laugh at my work, but I hope that the humor comes from a certain honesty and insight into our shared humanity and our common foibles and flaws, so I hope that it’s not just funny. Humor, and particularly a kind of self-depreciating dark humor, is pretty much genetically pre-programmed in the Scottish people, so it’s gratifying to see people in such a vastly different environment appreciating and enjoying the tone of these pieces. I know that for many people, the fact that something is humorous means that it shouldn’t be taken seriously as ‘Art,’ but I personally get pretty embarrassed by the almost vulgar seriousness that attaches itself to so much Contemporary Art, especially since a great deal of it seems, under closer examination, to ultimately be so unsubstantial. 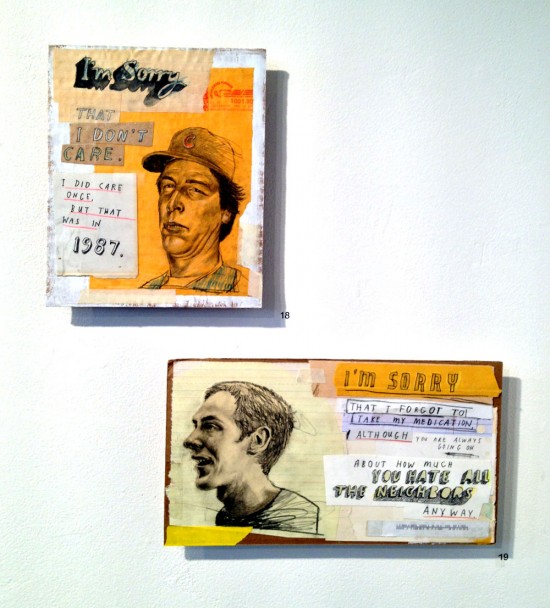 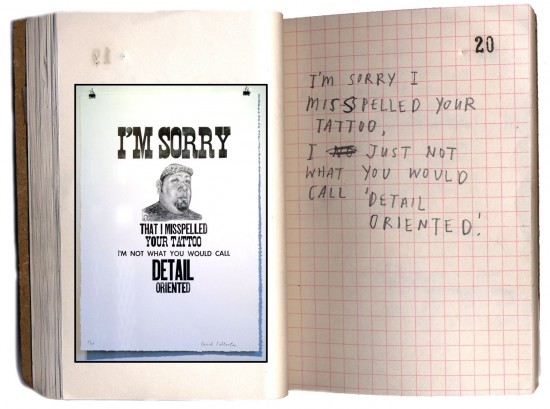 What do you do when you’re not apologizing?
My day job is freelance copywriting, and I occasionally get bits and bobs of illustration work. Non-professionally, I’m a Dad, which means I spend a lot of time at Little League games and soccer practice, generally doing family stuff and trying to get my offspring to apologize. That doesn’t leave a ton of spare time, so most of it is spent trying to make art, although my other twin passions are cycling and home brewing (and consuming) beer.

Thanks David! Go see I Can’t Apologize Enough at The Compound now through June 9th! 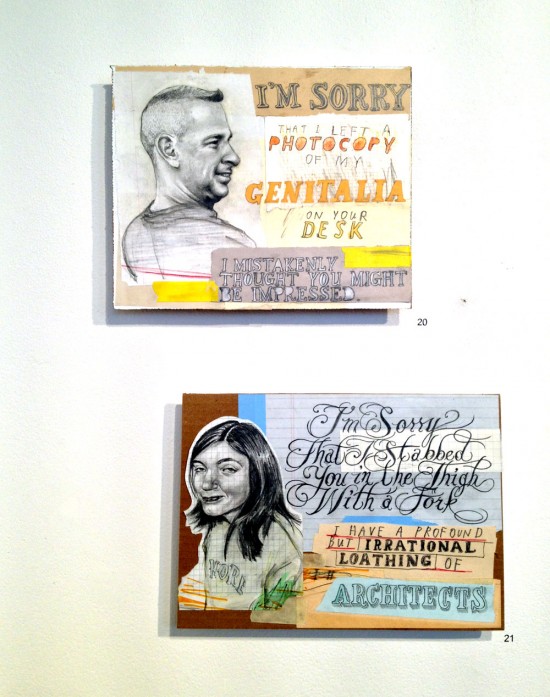 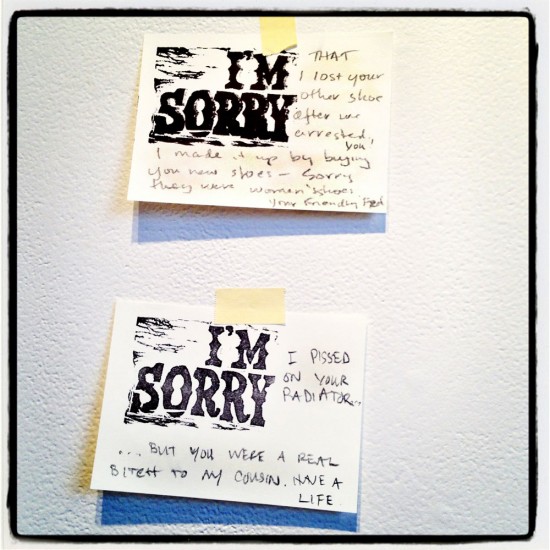 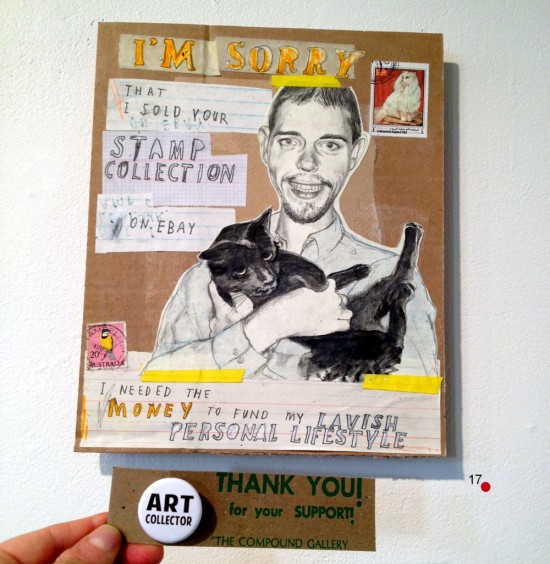