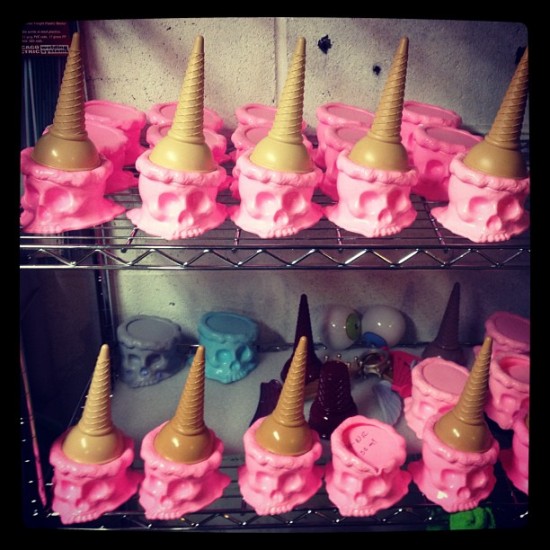 Bryan Brutherford is a New Jersey-based designer who “makes stuff”. His work takes the form of weapons that melt and ice cream that doesn’t and pet toys sold in pet stores that wouldn’t be out of place if called art toys and sold in museum stores.

His most recent creation, a series of 7.5-inch Ice Scream Man multiples cast in colorful urethane resin, is a fantastic popject. Structurally, if subconsciously, it references the Wizard of Oz by way of its conical “witch hat” and melting puddle of evil. It “screams” of skulls and sweets, but also smacks of metal and those novelty ice cream shooters I played with as a kid. Anyway you look at it, when I saw Brutherford’s initial Instagram pics of the simple, yet polished, Ice Scream Man, I knew I wanted one. But first, a chat with the Ice Cream Man himself. 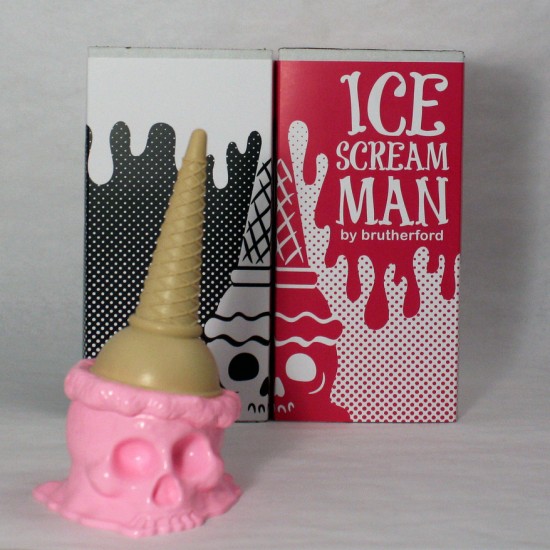 JB: Who is Bryan Brutherford?

BB: Aside from being a giant, crude, brute from NJ with a soft spot for cats and tiny underpowered cars, the most concise way to sum up it all up is with these three simple words: “I make stuff”. 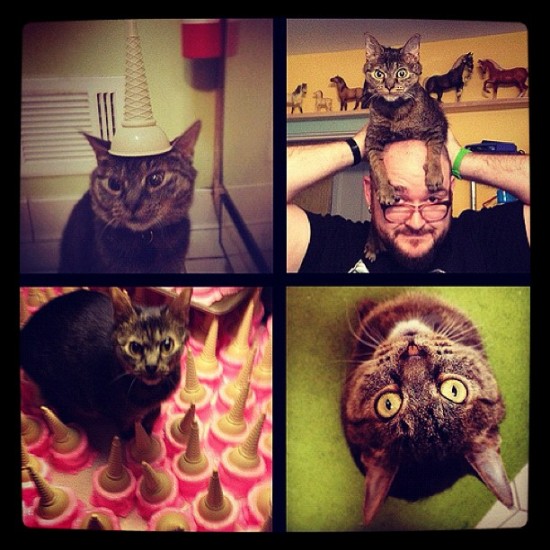 BB: It’s fun and confuses the hell out of people. It was a nightmare though when filing business registrations. I had accounts registered to Ryan Brutherford, Bryan Rutherford, Ryan B Rutherford. It was always a fantastic exercise to get the person on the other end of the phone to understand that I wanted them to spell my name incorrectly. 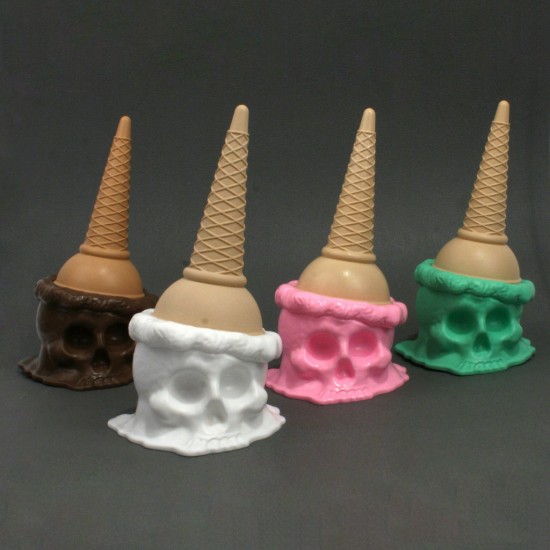 JB: When you’re not punking people on the phone, please describe what you’re doing.

BB: I work full time at a company I’ve been with for almost 10 years, and then I come home and work some more. I have always spent most of my waking hours making stuff.  A few years ago, I started working on cars and rebuilt one from the ground up. That car is now my daily driver, and when I finished it, I started another. Somewhere in there, I found time to work on custom toys, and I popped out a couple 200-300 piece runs of small toys. On top of the full time gig, building cars and custom toys, I also have a decent freelance career working as a product designer and manufacturing consultant.

This year, I decided if I could focus all the energy I spent on random projects on one single long term project instead, maybe I could build something big and FUN. The hardest part for me so far has been dealing with all the day-to-day issues of a small business:  logistics, accounting, customer service and the worst is counting all the money…haha. 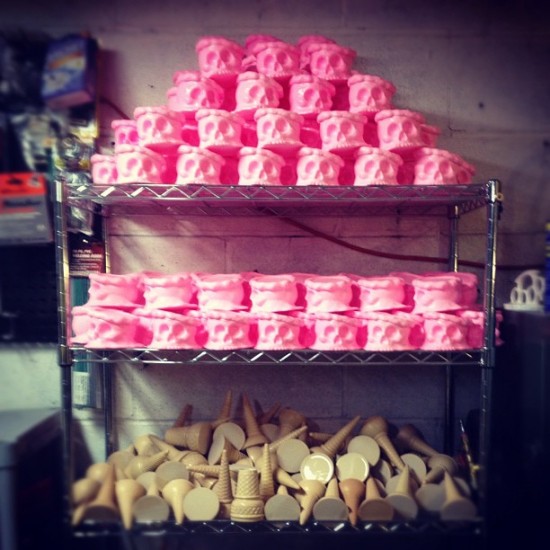 JB: Have you designed a product in the past that we may recognize?

BB: If there’s one thing that I’ve designed that people might know, it’s a migraine-inducing squeaky rubber dog toy called “Cuz”. There have been millions of them unleashed upon this earth. As a fresh graduate of the Pratt Institute industrial design program, I was and still am completely obsessed with form. Cuz is two simple elements: a ball and feet. I can’t tell you how many hours I spent agonizing over the right foot to ankle ratio, the angle of the feet, getting the perfect radius to transition from leg to body, the proportion of feet to ball, etc.

In my mind, the first generation Cuz was a perfect design object with a price of only five bucks. It came in Good (white) and Bad (red with horns). Cuz represented all the goofiness, irony and sarcasm that I absorbed by spending the 1980s parked in front of a television; it was  my joke on the world… What’s a good dog toy? A ball. How do you improve that? Give it feet!!! 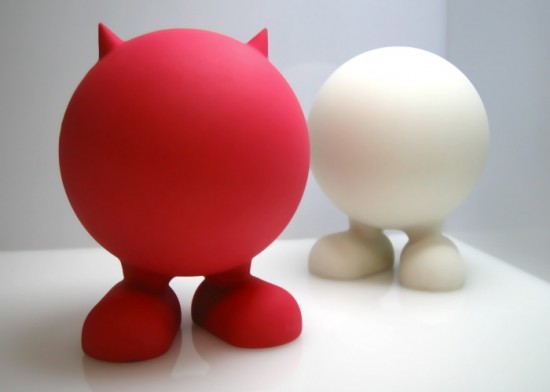 JB: Wow! Those Cuz toys are EVERYWHERE. How did that come about?

JB: As a college senior, I already had a job offer as an entry level product designer for Michael Graves. Because I already had that guaranteed job, I took a completely divergent direction for my senior thesis: I made a stop-motion film about Fu Manchu traveling through time with two talking gorillas and correcting all the great social injustices throughout history.

After seeing my ridiculous puppets displayed 100 times at the senior show, the owner of a pet products company approached me to come work for him designing dog toys. I wasn’t too interested at first, since I was planning to design home goods. But I went for an interview, and the offer was too good to pass up: I would have the opportunity to build a design department from the ground up. I took the job,  designed Cuz and 10 years later, it’s been a hugely successful toy. I’m still there with 6 people working in my department and I’ve been able to use everything I’ve learned to start building Brutherford Industries.

JB: What was the genesis of the Ice Scream Man?

BB: It started as a digital goof, something I worked up to get a few laughs out of my friends. I put it on my blog (which I didn’t think anyone read except maybe the 7 other people in the U.S. who care about French cars),  and I ended up with a pretty strong response from strangers. Around that time, I joined Instagram, and the positive feedback was incredibly motivating to keep moving the project forward. I am honestly amazed, humbled and so grateful for all the support I have received from complete strangers. 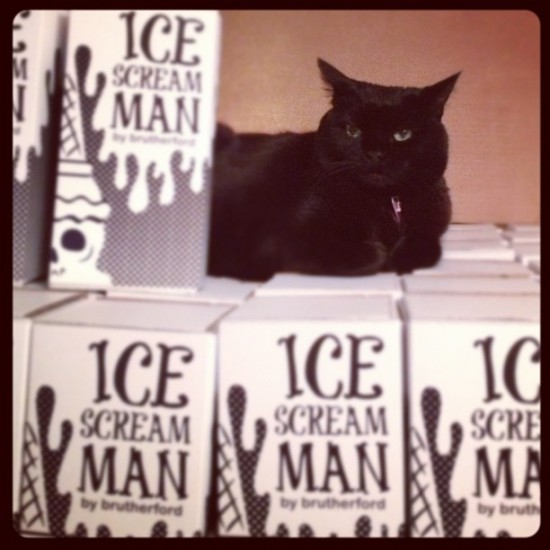 JB: Social networking for the win! Did you create the Ice Scream Man sculpt, do the casting, etc.?

BB: I did it all. It’s one of the benefits of maintaining my fulltime gig. I run a design department, and I have fantastic tools and facilities at my disposal.  I was able to spend my nights and weekends using some amazing equipment and software to bring the toy to the prototype stage. Once I had a prototype in hand, I fell into my manufacturing consultant mode and started to analyze how I could make it happen on a larger scale. I could have easily sent the design off to Asia to be produced, but instead I decided to dive in and started putting together my own little manufacturing facility. 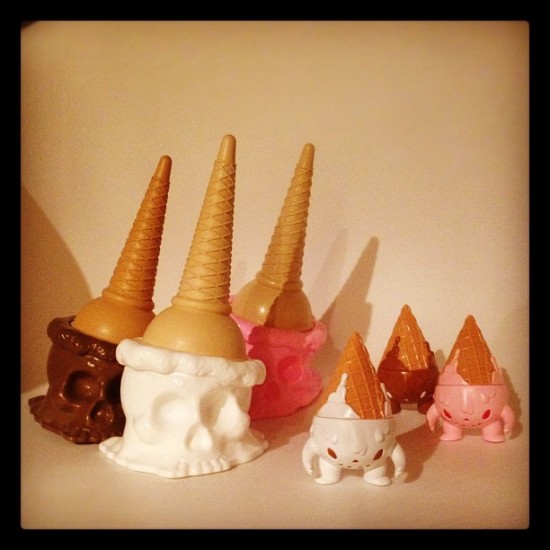 "Brothers from Other Mothers"

JB: That’s awesome. What is your favorite ice cream flavor? Has having an ice cream parlor (kind of) in your house affected your zest for the real thing?

BB: This is tough… I’d like to have some fantastic and exotic answer like lavender-machiatto-avacado-ripple but the truth is, I’m lactose intolerant. When I do throw caution to the wind and just go for it, I usually end up with  my childhood favorite…chocolate. 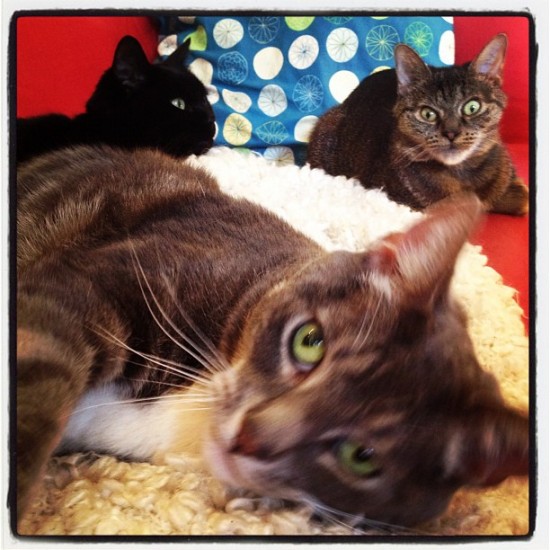 JB: Sometimes you have to suffer for love. Speaking of love, how many cats do you have, and what are their names?

BB: Tamara and I are huge cat lovers. I think I may relate to cats far better than I relate to most humans. [Ed note: ditto] We have two cats: Zombie and Phantom. In January, we lost our very good friend Little Ray. She spent a lot of time with me in the studio trying on ice cream cones to help get the scale just right. When we lost her, it put the brakes on the project for a little while. 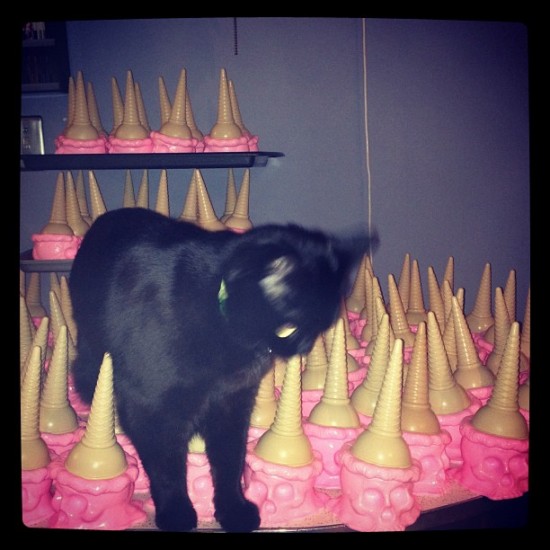 BB: Did you know we have a bridge in Trenton that says: “Trenton makes STUFF; the world takes STUFF”? Ok so maybe that’s not totally true, but NJ does  have a long rich history in manufacturing. Trenton was a huge part of early ceramics and porcelain manufacturing in the United States. Roebling Steel provided the cables for the Brooklyn Bridge, and all the big toy companies used to do injection molding in NJ as recently as the 1990s.  Although a huge percentage of those businesses are gone, there are more here still making stuff than most people think. 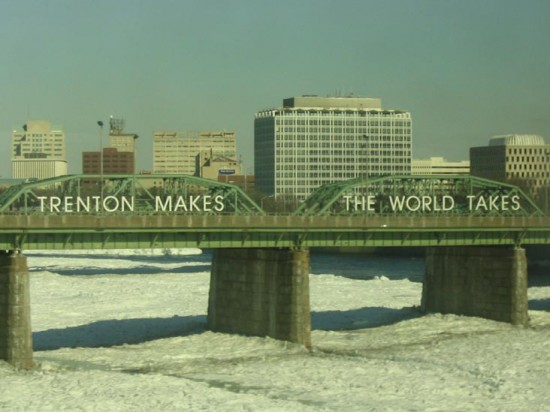 JB: Hopefully your answer will have an iota of impact to offset the damage done by Snooki and some Housewives. What’s on your music playlist right now?

BB: I’m a bit of a musical luddite. I mostly listen to the same bands I did as a teenager. I don’t think a whole week can go by without me throwing on some Descendents, Misfits or Cocksparrer, but there are a couple contemporary bands that I think are rad. Fucked Up is one of those bands, and someone recently turned me on to Shannon and the Clams; they’ve been getting a lot o’ play. 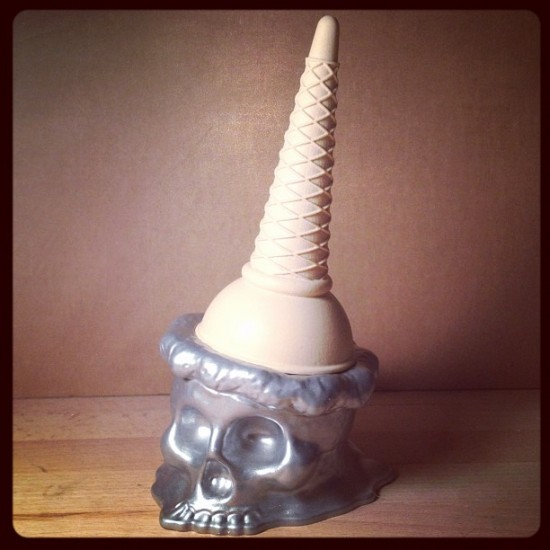 JB: What’s coming up next for Brutherford, and when can we expect some more of those exciting “flavorways” we’ve seen on Instagram???

BB: I’ve got some molds ready for my melted knuckles and a prototype of my melting grenade. I’m also desperate to get started on a toy version of my logo; it’s honestly all I think about when I’m processing orders or counting my money.  So far as the Ice Scream Man, my plan is to release some new flavors in March… but there are also some negotiations happening right now for some super exclusive rare and exotic flavorways.

JB: Can’t wait! For reading all the way down, you deserve some ice cream. Get an open-edition Villainous Vanilla Ice Cream Man or a limited edition signed and numbered Spiteful Strawberry Ice Cream Man now!