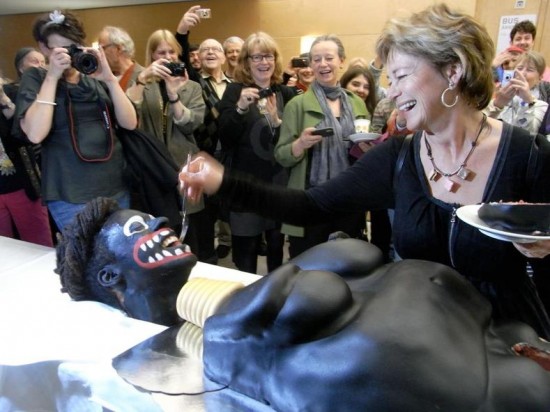 For Sweden’s World Arts Day, Swedish Minister of Culture, Lena Adelsohn Liljeroth, was asked to perform a cliterodectomy on a “performance art cake”. The cake was the idea of Afro-Swedish artist, Makode Linde. He thought it would raise awareness about female genital mutilation in Africa. Makode whose real (male) body was obscured below a table, screamed and moaned as the Minister of Culture smiled, laughed and then cliterally fed him the cake. To my knowledge, nobody vomited, which is what I suspect I would have done (and kind of still feel like doing).

Recap: female circumcision, cannibalism and racism are all apparently alive (and quite funny) in Sweden. 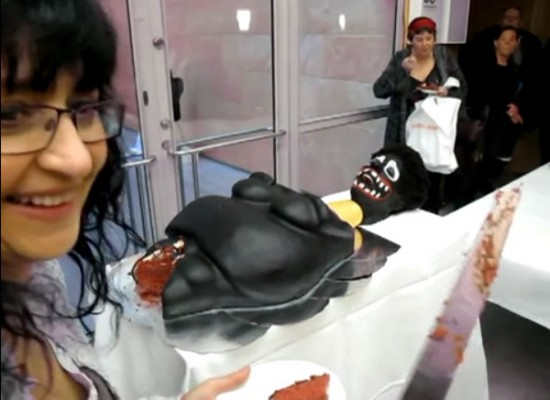 "Hahaha racism and mutilation are fun and tasty!"

If Linde’s cake was intended to be an artistic statement about female genital mutilation in Africa, why was it performed in Sweden by a man in a seemingly celebratory situation? The Minister of Culture issued an official statement today:

“I am the first to agree that Makode Linde’s piece is highly provocative since it deliberately reflects a rasist stereotype. But the actual intent of the piece — and Makode Linde’s artistry — is to challenge the traditional image of racism, abuse and oppression through provocation. While the symbolism in the piece is despicable, it is unfortunate and highly regrettable that the presentation has been interpreted as an expression of racism by some. The artistic intent was the exact opposite.” 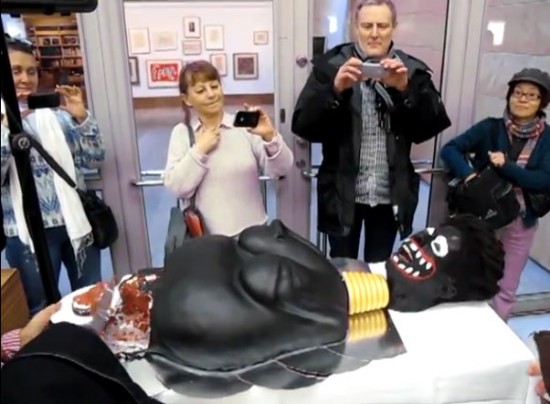 “It is perfectly obvious that my role as minister differs from that of the artist. Provocation cannot and should not be an expression for those who have the trust and responsibility of Government representative. I therefore feel it is my responsibility to clarify that I am sincerely sorry if anyone has misinterpreted my participation and I welcome talks with the African Swedish National Association on how we can counter intolerance, racism and discrimination.”

For his part, the artist is sticking to the partyline of the performance raising awareness for female genital mutilation. However, he also claims the Culture Minister whispered into his ear that things would be “better for you after this.” What the hell does that mean? WTF + WTF = ???

Click through to see video clips, which are disturbing.

There’s a whole lot of talk about this today, and I tend to agree with one of the commenters here:

“If I made a cake of a Jewish person and slid it into a oven to bake to start a party while everyone laughed and cheered to raise awareness of the still existent anti-Semitic views then that’s ok, right? Bottom line is you don’t take strides forward by taking steps back.”

Or to put it another way: A caricature cake baked to resemble an anti-semetic dictator is an ad campaign from Amnesty International. An Afro-Swedish male “artist” in grossly exaggerated “tribal” facepaint with a female body made out of cake is just tasteless.