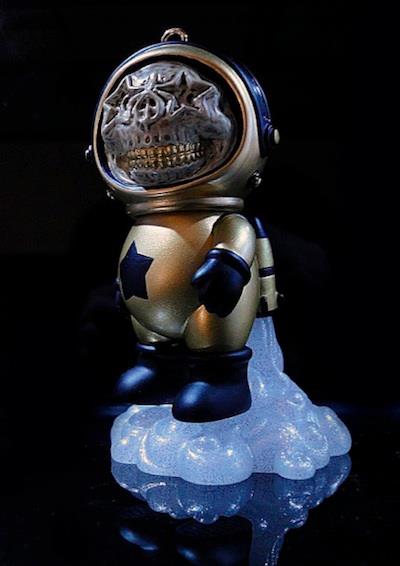 I did not see this one coming: Ron English and Chris Brown are collaborating on a line of vinyls to be known as Dum English toys. The news is all over the place following the reveal of a collaborative sculpture by the artist and the musician over the weekend at Art Basel. Here’s how The Miami New Times tells it:

They chose the image of the astronaut to represent this experience [the simultaneous attractiveness and isolation of fame] because just like a spaceman, Brown is in the spotlight but lonely at the same time. “An astronaut doesn’t go to space just for himself or his family. The whole country is behind him,” English explains. “Most artists listen to music when they paint,” he says. “A lot of famous musicians don’t know about art. Kanye West has gotten really into art. David Bowie got heavily into art.” He thinks there’s room with this project to expand audiences for both of them.

He does have a point. David Bowie was into art. Kanye West is a pretty big collector. And astronauts do often punch their girlfriends in the faces. I’m sorry to sound so jaded, but I didn’t really get English painting Brown’s Fame cover art back in March, and I don’t understand the collaboration anymore now.

The crisis of conscience will come into play when these drop (particularly if a green colorway is released). Any Dipsy could tell you that the Dum English Astronaut shares genetics with my beloved Telegrinnies. Also: the jetpack-cum-base is a clever design. I guess it’s a case of hate the player, not the toy?