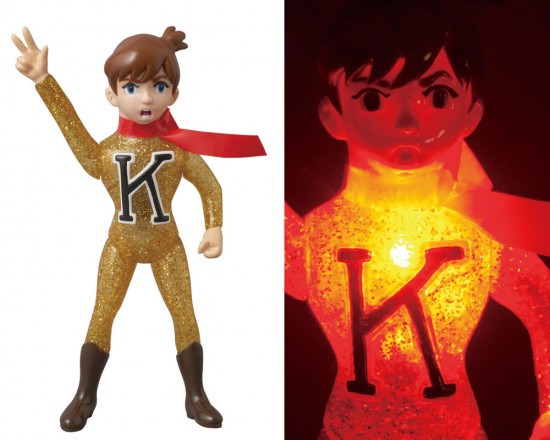 Speaking of memes, my good friend and anime expert, AnnaTheRed, helped me sort out the identity of this new Vinyl Collectible Doll. I’d posed the question: “gay or anime?” Anna explained: <<He isn’t gay. He’s just CHARGED. He’s from “Chargeman Ken!”>> OF COURSE HE IS. I think the Chargeman Ken VCD speaks to the importance of accents in language. Without that little accent aigu, lamé would just be “lame,” and clearly this flaming figure is nothing less than fierce.

Charge Man Ken is a Japanese animation series of 65 episodes, first broadcast  in 1974. In future, when science is greatly progressed, Aliens from a planet called “Jural” attacks a city with an ambition to conquer the Earth. Main hero, Ken Izumi “disguise”s himself as a “Charge man”, and fights with the Jurals.

The whole show is wacky and psychedelic enough on its own, but that doesn’t stop people from making their own “improvements”. Watch related videos at your own risk. That K on Chargeman Ken’s chest may as well stand for Internet K-Hole…