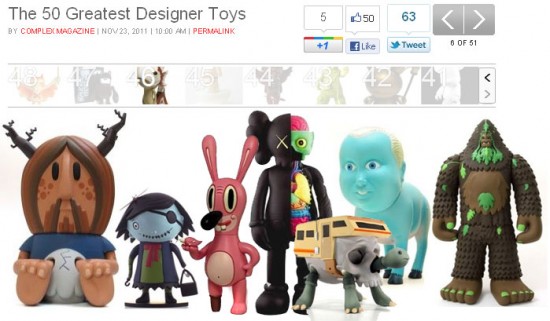 The second I saw Complex’s 50 Best Designer Toys List, I inhaled and braced for backlash. The complaints came swiftly: Artists who got left out. Toys that didn’t deserve to be there. While I, too, could point out a few numbers where I raised an eyebrow and mouthed the word “really?”, I think this is a GOOD, solid list. In fact, I agree with the merits of the majority of the toys that made the list. Here are a few thoughts:

Dear Complex: I see that you have let Coca-Cola re-brand your website with their advertising on your top and side banners as well as entire background. That alone should be worth enough to hire a copyeditor or proofreader for your feature stories. Lucky for you: I am affordable and looking for work! Contact me!