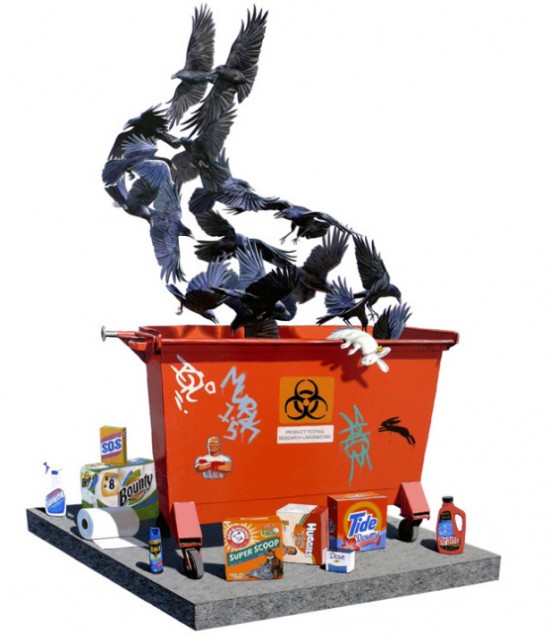 This piece by Josh Keyes for the upcoming Craola-curated Inle´ exhibition Gallery 1988 really arrested my attention. Per Josh:

This was influenced partly by Richard Adams Plague Dogs as well as the Inle character from Watership Down. The products depicted in the painting are made by companies that continue to test on laboratory animals including rabbits. The crows are in the shape of Inle and I though Black Angels was fitting in that though the act and natural behavior of carrion birds and other scavenger animals is disturbing (to us) it is part of the natural cycle of life. I see the crows as an active agent of liberation, freeing the lab animals bodies from a life of torment and by consuming and breaking down the body the animal is absorbed into the energy of the life cycle.

I’m embarrassed to say we’ve got some of those products in our house. We won’t be buying more; there’s plenty of alternatives. I like when art is both visually appealing and also powerful enough to inspire change. Congrats to Josh and Gallery1988, the latter of whom’s presence we already miss in San Francisco. But all is not lost: Josh Keyes will be showing at SF’s Fecal Face Dot Gallery beginning April 7th. In the meantime, check out more of the excellent Watership Down-inspired work from the Inle´ show here.