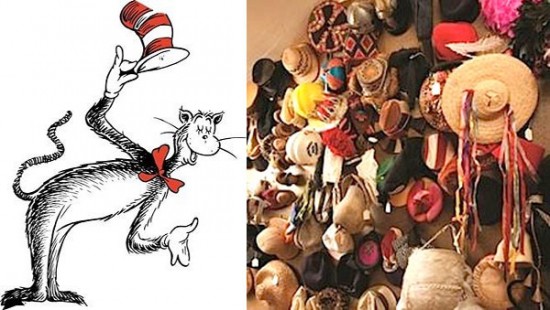 There once lived an artist who really liked hats. He had hundreds of hats—can YOU believe THAT? 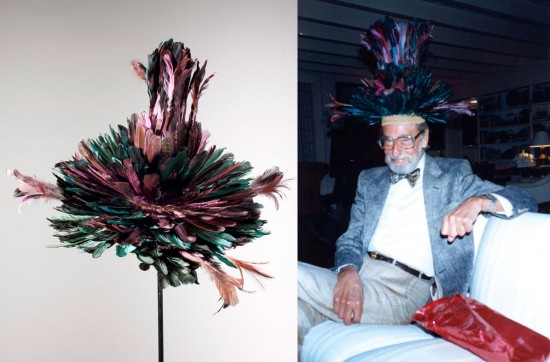 Throughout his lifetime, Theodor Seuss Geisel, better known as Dr. Seuss, quietly kept a hat collection in a secret closet behind a bookcase at his home in San Diego, California. Now, for the first time, 26 of Dr. Seuss’ hundreds of hats are on display in a traveling exhibition called Hats off to Dr. Seuss! I stopped by Dennis Rae Fine Art on Fisherman’s Wharf in San Francisco over the weekend to check it out. The collection is behind glass with prominent “no photos allowed” signage posted everywhere, so while I can’t provide you with original photos, I can spin you a little story.

Theodor Geisel was born in 1904—a time when wearing hats was commonplace—and he collected (less commonplace) hats on his travels thereafter. Robert Chase, curator of Hats off to Dr. Seuss! describes the diversity of Seuss’ hat collection:

Far beyond their functionality, hats were the accent—the exclamation point—on a person’s behavior. They could entertain, delight and embellish, even tease and taunt, but most of all, hats helped Dr. Seuss deliver a world of life-changing inspiration.

Seuss used the hats in his paintings, ad work, books and parties. 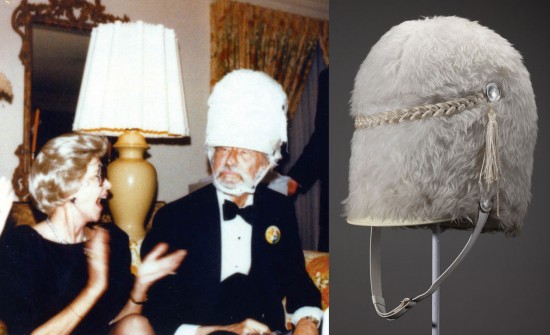 I like this quote from Dr. Seuss’ sister, Marnie, who visited Ted in New York in 1937:

Ted has another peculiar hobby—that of collecting hats of every description. Why, he must have several hundred and he is using them as the foundation of his next book. I have seen him put on an impromptu show for guests, using the hats as costumes. He has kept a whole party in stitches just by making up a play with kitchen knives and spoons for the actors.

That “next book” became The 500 Hats of Bartholomew Cubbins. It was the 2nd of Dr. Seuss’ 44 books, and it’s currently celebrating its 75th anniversary. 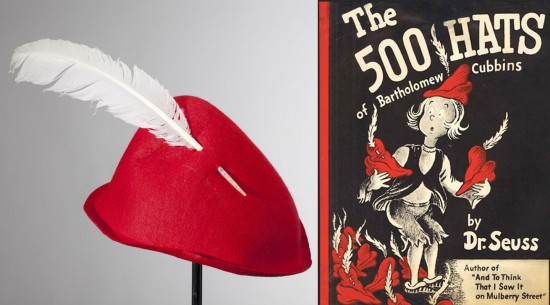 As editor in chief of Beginner Books at Random House in the late 1960s, Michael Frith worked closely with Geisel, sometimes into the early hours of the morning. When they were stumped by a word choice, Mr. Frith said, Geisel would often bound to the closet and grab a hat for each of them—a sombrero, or perhaps a fez. There they would be, sitting on the floor, Mr. Frith remembered, “two grown men in stupid hats trying to come up with the right word for a book that had only 50 words in it at most.”

What I would’ve given to brainstorm words while wearing hats with Dr. Seuss! 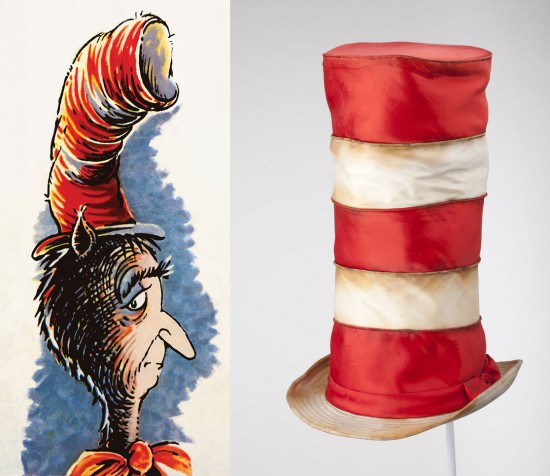 Chase continues about the transformative power of hats:

By putting a hat on a character, Geisel realized he could give that character a lot of personality. In some cases the hat became a punch line.

This ad for Flint insecticide helped cement Seuss’ career as a writer and artist. 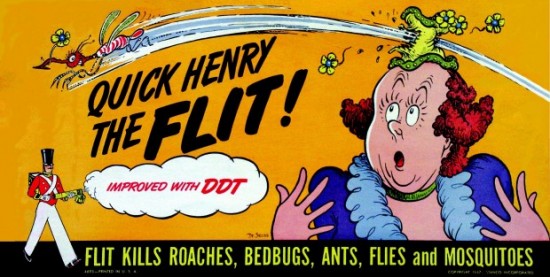 [Hats say]  something immediately about a person, whether it’s who that person is, or who that person wants to be. In a lot of his private paintings, Dr. Seuss would paint these images of people in these wild hats, almost as if they were trying to take on a different persona than the one that they actually had.

Hats off to Dr. Seuss! is now traveling the country in a specially retrofitted old-fashioned steamer trunk. It’s in San Francisco at Dennis Rae Fine Art (along with many of Dr. Seuss’ secret paintings—sue me, I snapped one pic of this piece I love) through March 31st, after which, it moves on to Texas and the rest of its 16 stops. View the dates and locations here. Read a good interview with the curator at Collectors Weekly here.