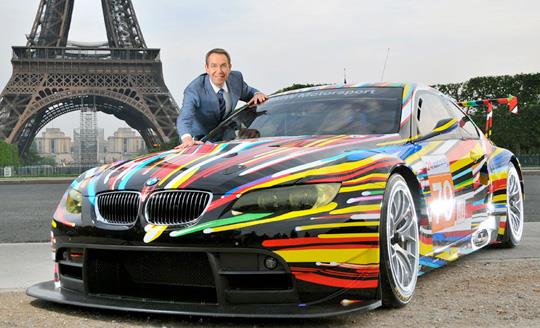 The bloggers at Wired wear their hearts on their headlines. Back in February, whenBMW announced they’d picked Jeff Koons to decorate their 17th art car, Tony Borroz wrote this: BMW Chooses Schlock for Its Next Art Car. But low and behold, today, upon seeing the finished vehicle, Chuck Squatriglia said: Jeff Koons’ BMW Art Car Doesn’t Suck. You know what? I kind of agree. The Bay Area is full of art cars (mind you, they’re no BMWs), but in case you’re new to this project, Chuck lays it out:

First, a little history. Bayerische Motoren Werke has since 1975 occasionally invited artists to use its cars as canvases. The result has been some striking vehicles, like the M1 Group 4 racer Andy Warhol painted in 1979, by some immensely talented people. The collection had grown to 17 BMW Art Cars before BMW tapped Koons to paint a BMW M3 GTS that will compete in the 24 Hours of Le Mans on June 12.

The Jeff Koons art car sports some serious color-blocking. Essentially, the design was wrapped over the car with vinyl, not unlike, on a smaller scale, what I did to my Honda Civic. 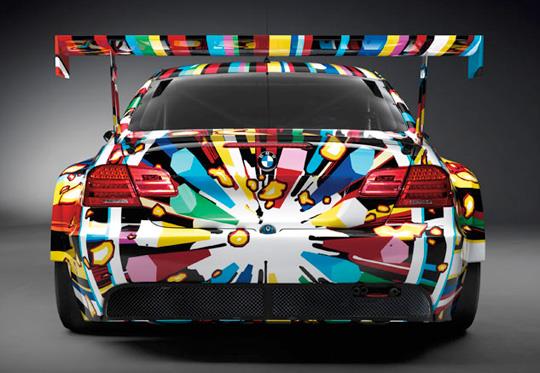 The official word from BMW:

At the premiere of the 17th BMW Art Car Jeff Koons unveiled and signed his car in front of 300 international VIP guests on June 1 in the Centre Pompidou, one of the world’s most prestigious cultural institutions for modern and contemporary art. It is the same place where Roy Lichtenstein back in 1977 first presented and signed his Art Car.

In the spirit of Calder, Stella, Lichtenstein, Warhol, BMW announced this year that the 17th Art Car created by Jeff Koons will race where the first rolling pieces of art by legendary artists raced – at the 24 Hours of Le Mans in France on June 12-13, 2010. Koons’ canvas is a BMW M3 GT2, which was homologated to compete at this year’s running of the world’s most famous endurance race. 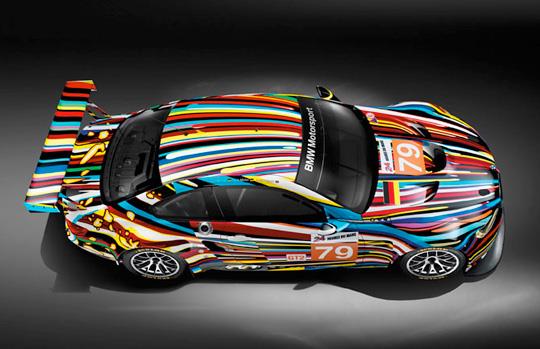 Today, in Paris, the art car is on display, and Koons, himself, will be doing a book signing. It’s possible that the name “Jeff Koons” is new to some of you out there who have come to appreciate art through toys. It’s no guarantee you will like the art of Jeff Koons, who is a polarizing figure in the world of (expensive) art multiples. That said, fans of Dalek and Richard Colman will, perhaps, feel some affinity with this colorfully striped art car. Now what would really be cool is if they released scale model art cars similar to what Volkswagen and Hot Wheels did in 2008…