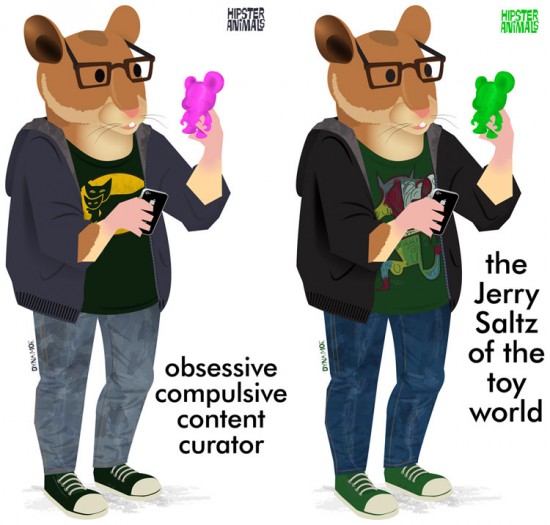 How cool is this? (The question is rhetorical, but the answer is VERY, VERY COOL.) Remember when I told you that the artist behind the excellent Hipster Animals website was briefly offering $100 custom portraits? (Hmmm. I see I posted that on 4/20, so some of you are off the hook if you forgot.) Anywho, here’s Dyna Moe’s portrait of me, the Obsessive Compulsive Content Curator (hamster).

I chose “obsessive compulsive” as my affectation for reasons which should be patently obvious. After careful consideration, I passed on Frank Kozik’s kind suggestion of “Fartleby the Tight Pants* Scribbler,” and chose to pair the OCD with “content curator”. (Although I strongly believe in this descriptor, I also have a sense of humor. I recognize that most people who aren’t content curators [definition here] regard the title as being right up there with Home Kombucha Brewers and Artisanal Charcuterie Makers.) Finally, I asked Dyna Moe to depict me as a hamster. Sometimes I relate to the plight of spinning one’s wheels. Also, I’m disarmingly cute and furry, but like a hamster, if you try to pet me, I WILL cut you.

Anyway, enough about me, let’s get back to that portrait of me. Dyna Moe interpreted the rest of the character, and I love it. I finally feel like there’s a purpose to having a Facebook page: It enabled Moe to know I own a Yamato Transportation T-shirt and that The Sucklord once famously referred to me as “The Jerry Saltz of the Toy World”. Speaking of that, the 2nd iteration (in green sneakers) was a complementary (and complimentary) variant drawing she did “in the spirit of urban vinyl”.

* “Jeremy, if you want to be hipster you have to stuff your ass into retardedly tight pants, you know, to freak out pinks” – advice from a tweet by Frank Kozik