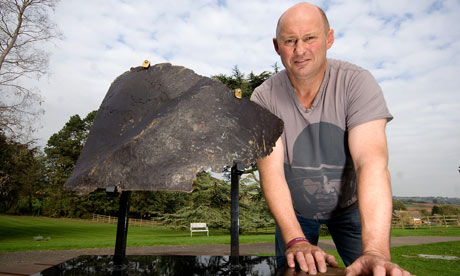 A UK man has been arrested for harboring the buttock from a statue of Saddam Hussein. The delinquent derriere was illegally brought back to the UK after US marines very publicly toppled the statue in Baghdad in 2003. Such trafficking is illegal due to the 2003 Iraq Sanctions Order, which governs the importation of “Iraqi cultural property”. 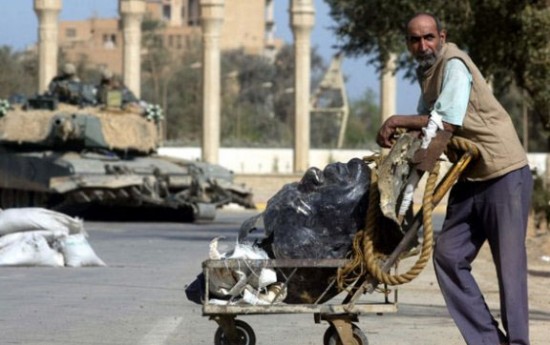 Former soldier Nigel “Spud” Ely owns Trebletap, a company specializing in war art relics. He says he saved the 2-foot bronze buttock from being melted down by locals for scrap metal.  Ely has since written a bunch about it, including a whole “Saddam’s Arse” section on his website.

I spent hours and hours just looking at the piece of bronze and trying to determine exactly what I saw in it, what it meant to me and what it represents. I finally came to the conclusion that it would be wrong to even attempt to change it in any shape or form. This bronze is unique. In itself, it represented most of the frailties of mankind and yet it still offered hope for the future. The bronze piece carries a steely air of defiance with its ripped, serrated edges yet when angled it becomes tactile like you want to slap it because you know what it once represented.

Ely further questions how a piece of metal from a statue put up by a dictator could be classified as national cultural property “when it was put up by the biggest tyrant since Attila the Hun”. He compares possessing the buttock to having a piece of the Berlin Wall: “It’s part of history, but it’s not cultural property.” 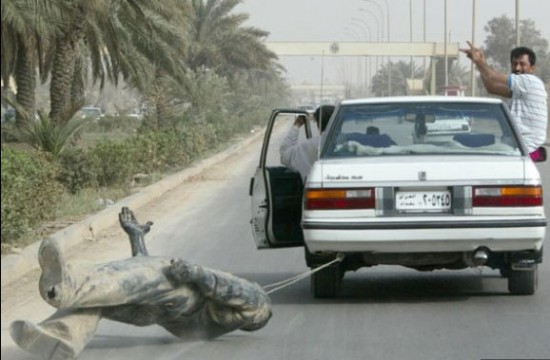 The Saddam Hussein statue’s buttock has been valued at £250,000 or ~ $388,600 USD. It’s not worth as much as Jennifer Lopez’s insured ass, but still, if Ely sells or defaced the buttock, he could face prosecution. These are the kinds of stories that make me feel alive.

[info via The Guardian]