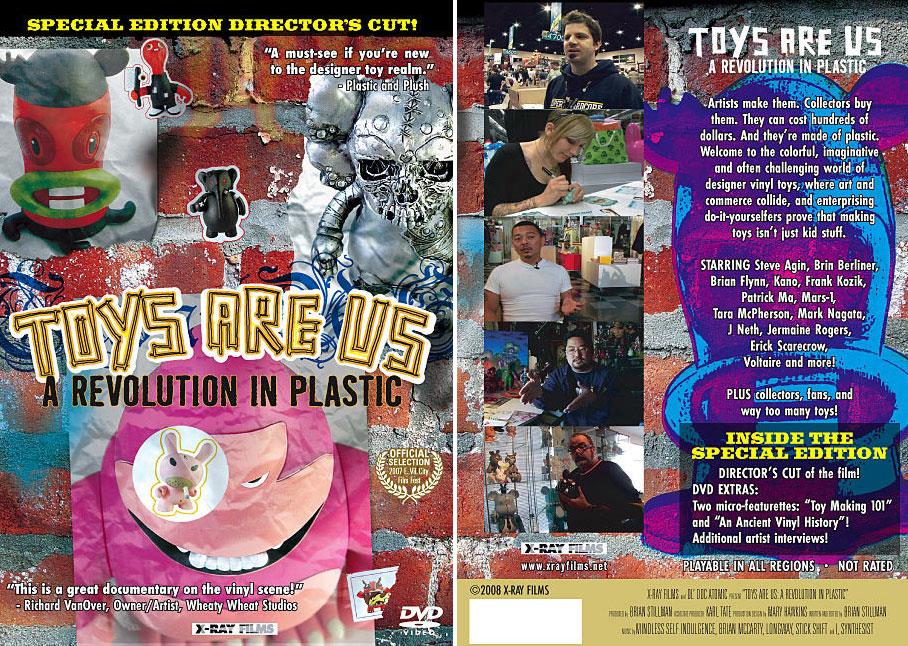 Toys Are Us: A Revolution In Plastic is a documentary on the vivid world of vinyl toys, the people who make them and the collectors who love them. Produced by X-Ray Films, Toys Are Us was shot on location across the country, exploring the scene through the eyes of both designers and fans. The documentary features interviews with Frank Kozik, Patrick Ma, Tara McPherson, KaNo, Erick Scarecrow, Mark Nagata, Nathan Jurevicius, Brian Flynn, Brin Berliner, Mars-1, Jermaine Rogers and more. Now that the director’s cut is out, I thought I’d interview the movie’s director, Brian Stillman. 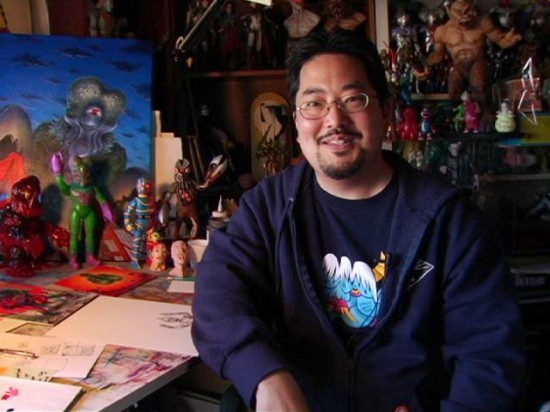 Toys Are Us provides the unique thrill of seeing your toys and their diverse creators on your own television. At times, the documentary is intimate and candid. The interviews with Frank Kozik and Brian Flynn are particularly educational. Witness their perspectives on who gets “O.G.” credit for the designer vinyl movement (hint: it’s not Michael Lau) and some choice words for and against extended colorways. Speaking of colorways, Mark Nagata bemoans that his Japanese friends are always on his case for using “American” colors on Max Toy Co kaiju… 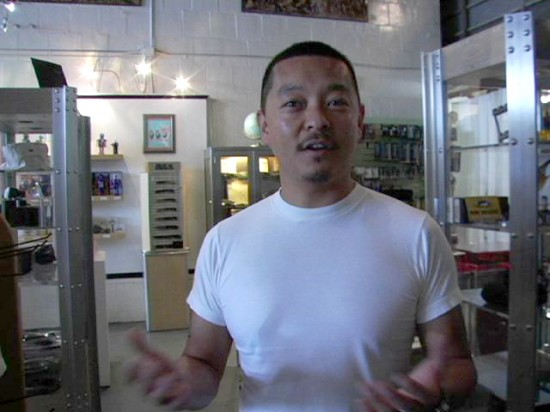 There are a bunch of memorable quotes throughout the film. Per Patrick Ma: “Toys are a vocabulary within this art genre context”. Speaking of vocabulary, the former military, Rocket World proprietor throws out an impressive array of 50-cent words. Frank Kozik is always quotable. A couple of my favorites:

But perhaps it is Jermaine Rogers who sums it up best with “If you would have told me then, that I’d make toys one day, I would have passed out. It’s a new canvas for an artist to express his ideas. I dig it.” 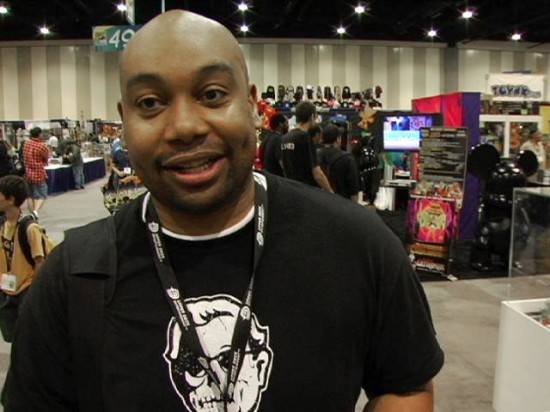 JB: I know you were a journalist, so how did you end up making Toys Are Us: A Revolution in Plastic?

Brian Stillman: I was in grad school at the time for broadcast journalism and documentary work (at NYU) and decided that vinyl toys would make for an interesting thesis project. I’d been a toy collector for a number of years and was already friendly with Mark Nagata through his collection of toy ray guns. Mostly, as an old punk with a penchant for DIY projects (and an unhealthy lust for toys), I found the idea of people MAKING THEIR OWN TOYS to be pretty fascinating. I realized that there was a market for such a film, mostly because it was something I wanted to see myself, but couldn’t find anywhere. So I decided to hit Comic-Con in 2006, where I shot signings and made contact with the artists. A couple months later, I travelled out to San Francisco to do a bulk of the interviews, followed by more interviews in NYC and Toronto. 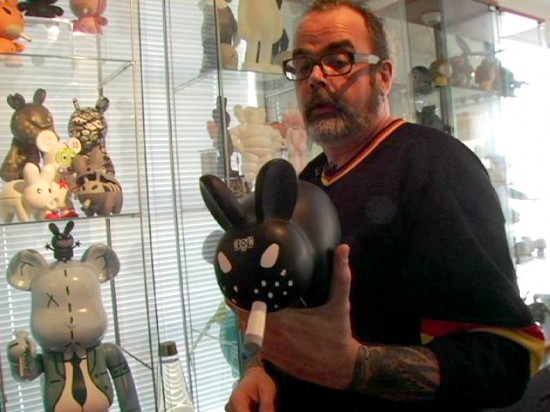 JB: Can you talk a little about the punk/DIY ethos you see present in the toy scene and/or how it paved your journey into it?

BS: Well… I’ve always been into DIY culture, whether it’s making music and recording with my band Atomic Box or publishing ‘zines or putting out documentaries or running my own dance clubs. We now live in an age where it’s so damn easy to come up with an idea and then make it happen without corporate involvement or vast sums of money. All you need is the drive. (Even talent’s optional.) I think that’s all just wonderful.

I’m not completely anti-corporate or anything like that, but the reality is that most people won’t land a record deal or get a book contract or hook up with a major movie studio to produce their film. But we live in such a DIY society — technology has become better and cheaper, and resources abound–that you don’t really need any of those more traditional outlets to bring your projects to life.

So as a toy collector and fan, the idea that people could make their own toys had an obvious appeal. And the fact that these toys weren’t necessarily being marketed to the lowest common denominator, that they were challenging the status quo–the fact that these toys often required people to think a little bit, to really push their own boundaries about what makes a toy and what makes art and what’s meant by the word “play”–all seemed punk as hell. 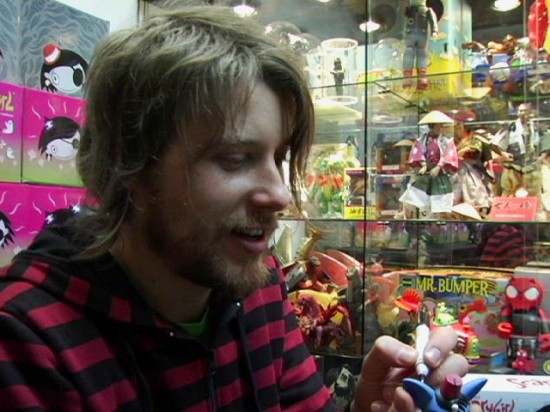 JB: Who was an artist you would have liked to include in the doc, but for one reason or another, couldn’t?

BS: There were MANY people I’d have loved to include in the doc, pick an artist, any artist… In fact, there are artists in the doc who I’d have liked to have spent more time with. Jermaine Rogers, in particular, was a great interview, but I was only able to speak with him briefly at Comic Con. If I could have made it down to Texas, I’d have definitely done so. He was great on camera, and his pure love for toys really came through in even his brief time on screen. 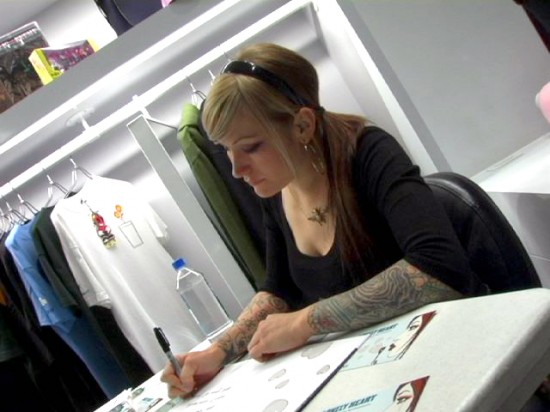 JB: What do you collect?

BS: The main collection that sucks my wallet dry on a day to day basis would be vintage robots and ray guns. The robots are mostly Japanese tin, and date from the late 1940s to the mid 1960s. The ray guns are, for the most part, from the U.S., and are generally made from pressed steel or plastic–they date from the mid 1930s through the 1950s. I’ve been collecting them for about five years or so, and have built up a pretty extensive collection, including many pieces that are extremely rare.

I do collect vinyl, as well, but I’m really selective about the pieces I buy. I’ve got some stuff by Kaws, Ron English, Nathan J, Jermaine Rogers, Kozik, and Mars-1. I also have a lot of toys by Mark Nagata. Lately, I’ve been picking up a lot of Japanese kaiju–not the neo-kaiju fight figures, but the big, old-fashioned, stomp-your-city-into-the-dirt monster figures. On top of that, I have a nice collection of vintage (and some new) vinyl Kikaider figs that I really love. 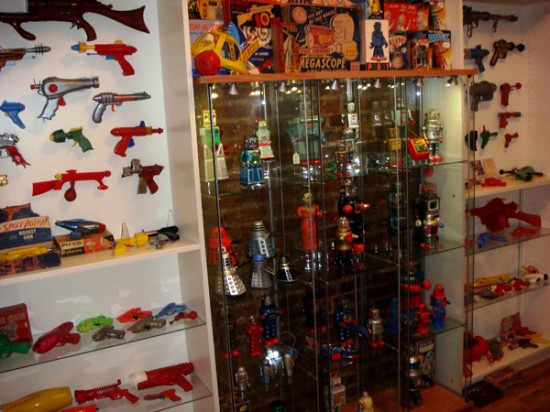 JB: Where can fans get a copy of the film?

BS: It’s available right now through Filmbaby.com. Just go to the site and type in the title or click the link via my website, xrayfilms.net. It can also be found at a number of boutique toy stores across the globe thanks to the fine people at DKE Distribution. And starting on September 30th (in theory) it’ll be available through national retail stores via Ryko distribution.

JB: What’s next for X-Ray Films?

BS: A very top secret project, actually. I think people will dig it… I’ll give you a hint… No, I lied. Top secret means top secret.