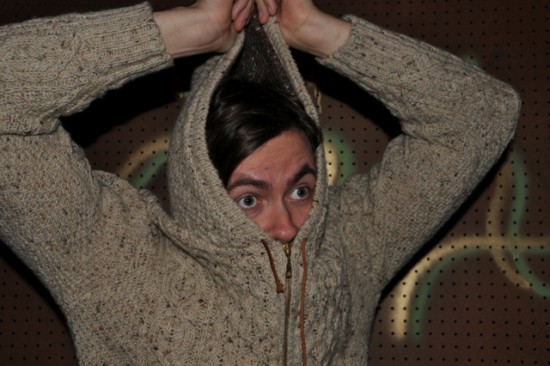 I’m a guy who likes art toys, stories, offbeat humor and escaping to my Happy Place, so I got the appeal of Ryan Roberts‘ toy photography instantly. The Nashville-based, self-taught photographer has been using toys to immortalize life’s idiosyncrasies for a few years, and with this weekend’s release of a 2012 calendar, he’s clearly projecting into the future. So get used to his name, because as the New York Times says, In the Art World, [there’s] No Lack of Ryans. But I digress. 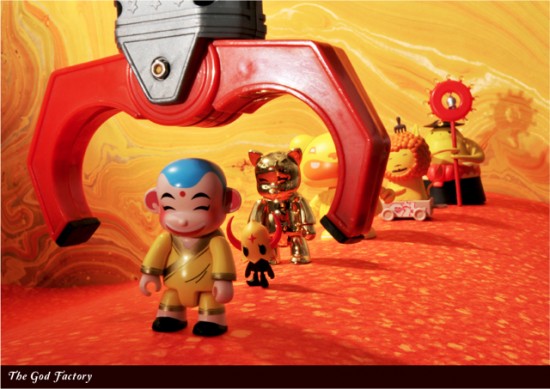 Like one of his heroes, pioneering toy art photographer, Brian McCarty, Roberts captures the “art” of the toys with his lens. But don’t be fooled by whimsy: there is often dark comedy and social satire within. Roberts’ enthusiasm for the process is conveyed, even by distance, with a tendency toward multiple explanation points!!! This morning, his prints will magically appear on sale at Fab.com, so go get someone that you love something fun to stare at. Proceed below to meet the man behind the mania. 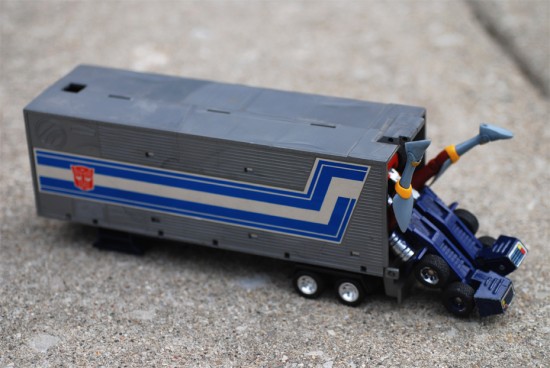 JB: Do you have a professional background in photography? (Or are you just really talented at playing with toys?)

RR: I wish I had a professional background in photography! I’m so jealous when I see artists who’ve studied and mastered the art of photography. I took a couple classes in college and fell in love with it. However that was the late nineties and digital cameras weren’t what they are today. Eventually, I put down my old film camera and went on with graphic design. But a buddy got me shooting again, and I worked my way up to a nice digital camera and started taking macro photos of my toys. One morning I woke up and looked over at my shelf of old toys and envisioned Optimus Prime having sex in his own semi trailer and voila, tons of ideas for toy photos came pouring out!

JB: Somewhere, a nerd just had an orgasm. In your process, do you come up with a story and then collect the characters or do you collect characters and get inspired to create a photo?

RR: I’d say a little of both. In the beginning, I was shooting mostly vintage toys. When I stumbled across Kozik’s Mongers, Damon Soule’s Life Inventsville, Doma’s Acid Sweeties, and of course Pete Fowler’s Monsterism, “I was like, whaaaaaat???” So then I started collecting art toys like crazy. I also learned of Brian McCarty and was like, yeah, I need to really get my art together!

JB: The colors, composition and story in your photography is so terrific. How have the toy designers reacted?

RR: I actually just started reaching out to toy designers a few weeks ago. I started with Europe and have heard back from a few designers including Tado and Skwak! They were stoked! I’ve been shooting these toy photos for a few years so I’ve got a massive back catalog, plus tons of new photos ready to go. Once I get through those… I have a huge set of toy ninja and kung fu photos lined up. I love ninjas, like all night, in the dark, listening to Ninja Tune, I am a ninja! 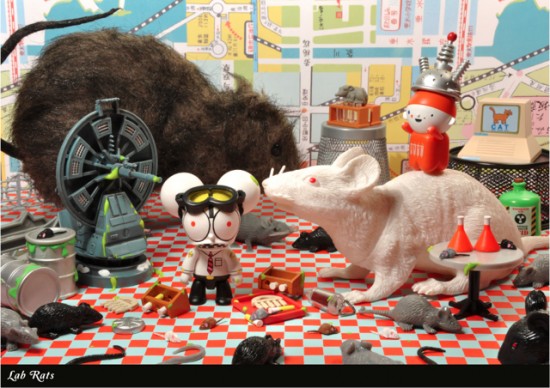 RR: I’m mostly hunting online. I finally just scored the Unabomber figure from the first Blow Up Dolls series, and I have a totally dope photo lined up for it. I would have it in my new 2012 calendar that just came out, but the fine people who were mailing me Amanda Visell’s Green Dragon Scout sent it parcel post! [Ed note: Bastards!] As far as favorite toys to shoot, hmm… I love all of ’em! I’ve shot almost every eBoy Peecol figure so far. And I’ll probably keep going until I’ve shot them all! eBoy, lets collab! I have a t-shirt of theirs that’s all the talk of East Nasty, looks like a couple Daft Punk figures robbing a bank! [Ed note: Is it this one?] 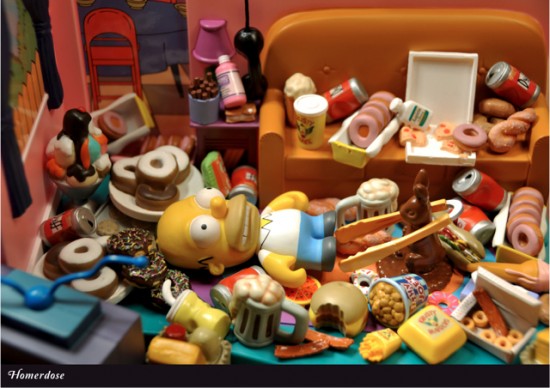 JB: Bit of a personal question, but some folks may wonder: is romance a problem when your apartment is (presumably) covered in blind box toys and Re-Ment mini figures?

RR: Lucky for me I found a magical wife who loves my hot toy mess! She keeps saying, “make that money, make that money!” We need to make that money, lol! To all the rest of the toy designers and retailers out there who may read this: I love you. Your toys inspire me and give me so much to work with!! Keep it coming!!!

Ryan Roberts’ 2012 toy calendar is now available here. His prints are on sale at a maddeningly good discount for the next three days here. No money? No problem. Watch his videos for free here.