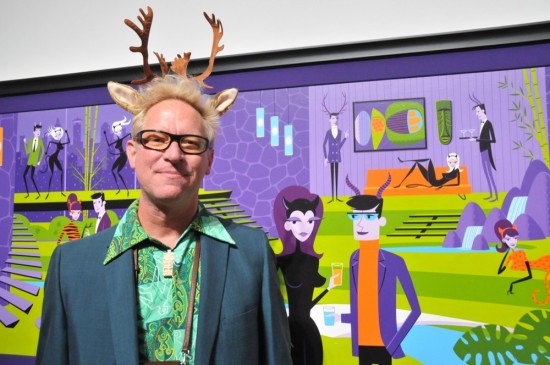 Most people tend to think of Shag as being an artist and active participant in the lounge lifestyle. While these things are both true, Shag is also a published author and fan of linguistics. For instance, “Shag” is a portmanteau for “Josh + Agle,” similar to how “Jeremyriad” is a portmanteau for “Jeremy + Myriad”. While interviewing Shag for the release of his new Vannen artist watch, I took the opportunity to ask him a few uncommon questions. Kitsch culture-haters take note: there’s no tiki talk* in this Shag interview!

*There is a teeny, tiny bit.

JB: So… “Shag” can also refer to a form of swing dance, a type of carpet, a kind of hairdo, a family of birds, a finely cut tobacco, a slang term for sex and “the act of catching fly balls in baseball outside of the game”. Which of those is your favorite disambiguation?

Shag: Hah! That’s a great question. When I initially started using the name Shag, I was thinking of the carpet and British slang for sex, but I knew it was a kind of dance and haircut, too. That’s one of the reasons I chose the name – it seemed to reference a lot of things that I thought were pretty cool. I didn’t know about the bird family until your question. I looked it up, and it’s a bird I see all the time while I’m boating in Newport Harbor, so that’s currently my favorite meaning. 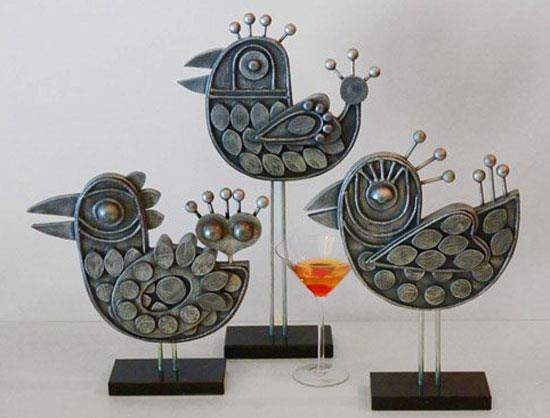 I started this blog to write about toy art. With the recent fast sellout of your bird sculptures, is it fair for toy art fans to get our hopes up for another Flank or Shriner in the near future???

There will be other toys down the road, but I’m very conservative in the toys I design and release. Honestly, when Medicom approached me to do a toy with them (Flank) seven or eight years ago, I almost said no. I thought a few artists had already saturated the market in artist toys. Little did I know that the phenomenon would continue to grow and gain respect. The Shriner toy was designed to look and feel like an old advertising figure from the 50s or 60s rather than a contemporary vinyl artist’s toy, and that’s what drew me to the project. I have designs for five toys that I want to produce at some point, but I’m waiting for the right circumstances to come along. 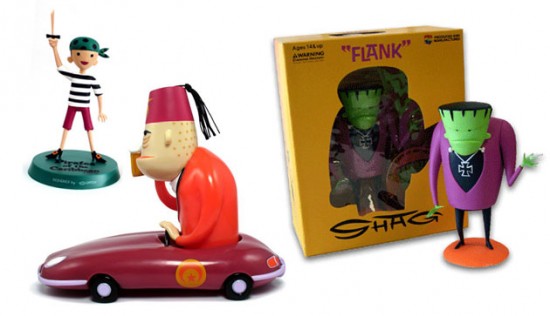 It seems that many fine artists are advised against making ‘product art,’ but from housewares to clothes to your new Vannen watch, you’ve never shied away from it. Can you explain your thoughts on that old debate over art vs. product?

Any successful artist will eventually end up with his works on products. It might not happen until years after he’s dead; I’m sure Van Gogh never imagined his art would show up on dish towels or refrigerator magnets. I decided I’d rather control what products my art showed up on, and I was also inspired by artists like Keith Haring and Andy Warhol, who didn’t shy away from merchandising their art, yet retained their reputations as fine artists. 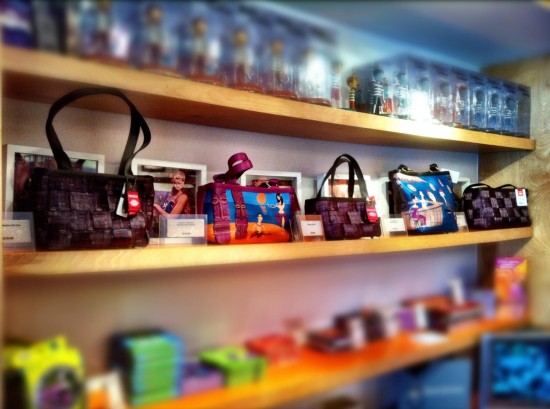 What would be your fantasy product art or brand collaboration?

I’d love to do a completely outlandish, overpriced, decadent limited edition product with a high-end luxury brand like Gucci, Chanel, Versace or Louis Vuitton. Just the idea of a rich Upper East Side woman or Beverly Hills housewife showing off her ultra rare Shag product would titillate me endlessly. 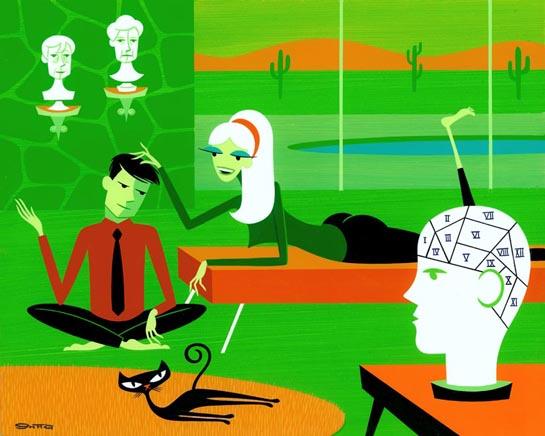 I love your Shag A-Z “children’s book’! Is the world of a child kind of like the ultimate world of carefree consumption?

That’s a good insight I never really considered. As a child, carefree consumption is almost mandatory (unless you’re a ten year old Chinese girl working in a sneaker factory). Maybe the reason I have big cocktail or dinner parties is to recapture that feeling, when you could indulge in almost anything without guilt. 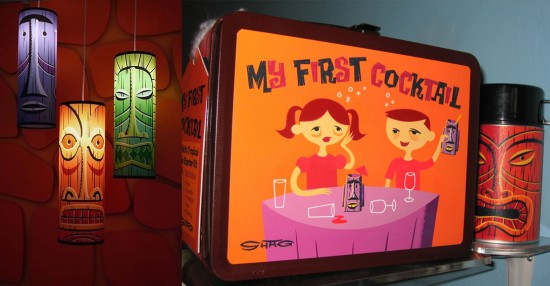 I’ve heard that you’re a big Disney fan. What do you love so much about that place?

I love how the Disney parks have refined and perfected certain eras and cultures. What does a pirate look like, and how does he act? What will the future look like? If a group of birds and tikis magically came to life, what would that be like? Mickey Mouse and Donald Duck hold little interest to me, but the places and things the Disney Imagineers created are worthy of the title “Magic Kingdom.” 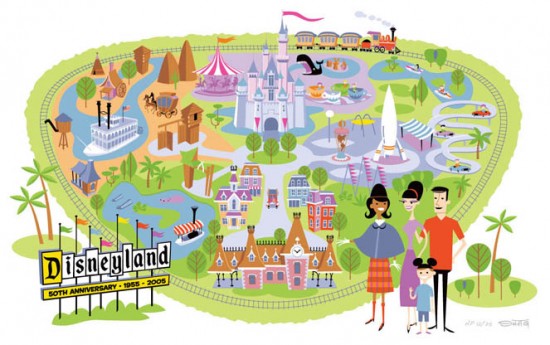 When I was a kid, everything you could touch and buy at Disneyland was magical: a ceramic shrunken head, a tiki book-end, a large rubber snake, a frontier-era musket. I remember buying a little stuffed dinosaur at Disneyland when I was about 7 years old. It had such a distinctive, lovely smell. Occasionally I’ll come across something that smells like that, and I’m instantly transported to my childhood. Now, to know that products and art that I’ve created are displayed and sold in the same shops at Disneyland and Disneyworld, and possibly viewed the same way by kids (and adults), is really affirming to me as an artist, in a way that selling a $40,000 painting to a celebrity at a high-end gallery is not.

Is the hedonistic fantasy you once aspired to embody still alive and kicking in 2012?

Absolutely. You don’t have to be rich, or a jetsetter, or live in Paris, Bel Air, London, Soho or Sydney, to create your own hedonistic fantasy. When my wife and I lived in a one bedroom apartment just after we married, we were determined to build a space conducive to cocktail parties and hangout out with cool people. Now our house might be a little more conducive to big parties, but it’s more about the attitude than the surroundings. 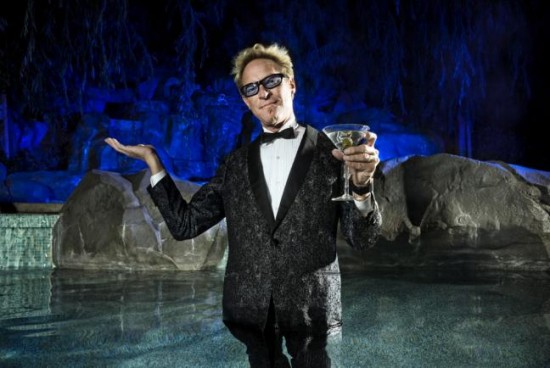 If all your fans wrote you in on November’s presidential ballot and you won the election, what would be the first change you’d make?

Oof. That’s a tough question, because I generally hold all politicians in fairly low regard, and my first instinct would be to resign immediately. A theory I’ve been putting forth for the last twenty years is, if someone actually aspires to be the President of the United States, he or she should automatically be disqualified, on the grounds of mental defect. That being said, I’d probably try to decentralize the government and give more power to states and cities. 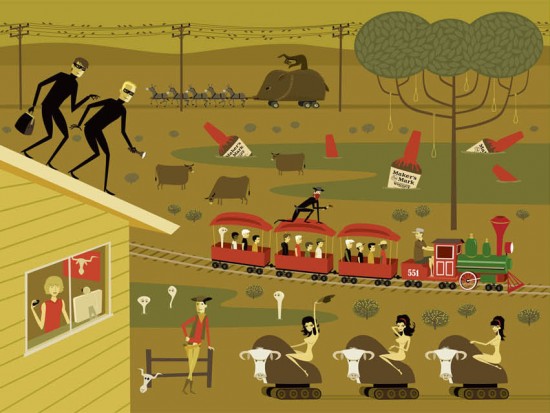 What advice do you have for aspiring artists, particularly those who are having a hard time right now?

My advice to an aspiring artist would be to continue doing what you love, not what you think will sell or make money. It might take a while, (and in some cases might not happen until after you’re dead), but eventually people will recognize the amount of energy, belief and spirit in your work. 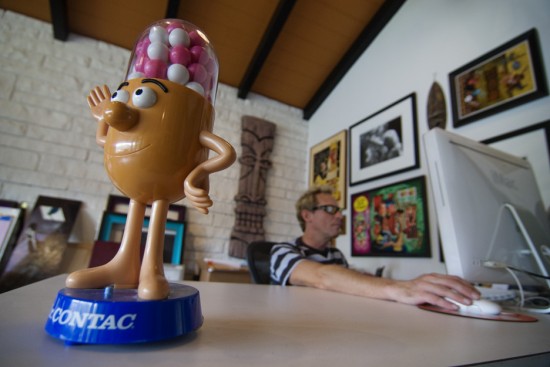 Shag in his studio (2010) © Mark Berry for Bizarre Magazine

Finally, ending on an up note: Is it true that you once made out with Peko-Chan, the Fujiya Food Service mascot???

Ah!! How did that story get out? The last time I was in Tokyo, I drank too much Shochu, and most of an entire evening was spent in a haze. The next morning I had no memory of what had happened, though my friends and business associates described it to me afterwards. In addition to challenging people on the street to Karate competitions, I did make out with a life sized statue of Peko-Chan. I didn’t believe any of what they told me I had done until they showed me the pictures on their iPhones. Those pictures exist somewhere. I don’t have them, though….