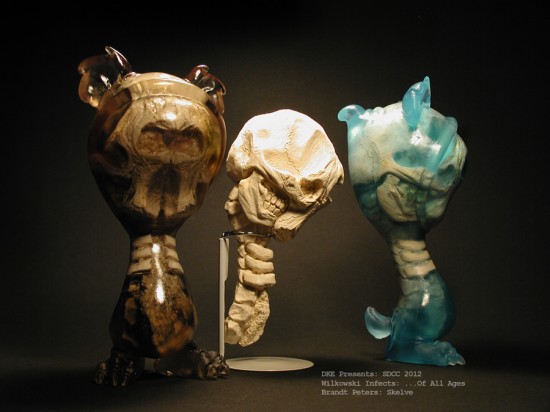 Scott Wilkowski‘s reign of resin terror continues as he treats toy collectors to new x-ray views of our favorite figures. Up top, he’s designed skeletal structures for Brandt Peters’ Skelves. It’s always “fun” to compete with Circus Posterus fans for a Skelve release, so prepare your spiked elbow pads for Friday, July 13th at 12PM at DKE’s SDCC booth #4728. The hand-cast resin Skelves are an edition of 25 pieces in two different colors (50 pieces per style), retailing for $300 each. 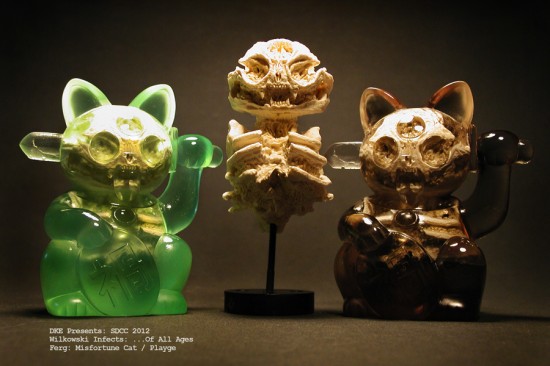 I’m a big fan of Ferg‘s Misfortune Cat, and now Wilkowski offers (perhaps) a glimpse into the nature of the misfortune. Wilkowski’s infected Misfortune Cats will be available in green and black colorways for $125 each. They’ll be released on Thursday July 12th at 4PM at DKE’s booth #4728. This will be followed by a 5PM signing with Scott Wilkowski and Ferg (and me, probably Instagraming the hell out of it). 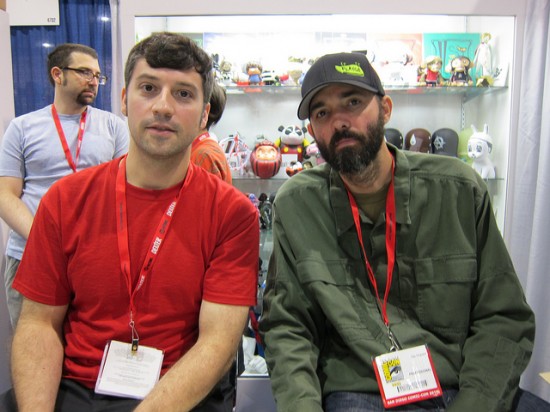 Here’s a flashback to SDCC 2010 with DKE’s Dov Kelemer, Scott Wilkowski and Ferg. It will look just like this at 5PM this Thursday, except everyone will have a few more grey hairs, and I will try harder to get them to smize. See Scott’s previously revealed SDCC 2012 Labbits and Flatwoods Monsters here. Oh, and if you’re a misfortunate cat yourself, stay tuned to this site for some prosperous news after Comic-Con!