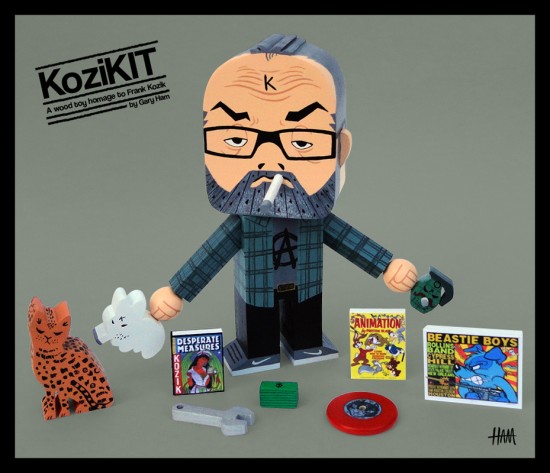 In an impressive followup to his 2011 Sucklord homage, the SUCKset, Phoenix-based artist, Gary Ham, has produced the KOZIKit, a wooden tribute to Frank Kozik. The hand-made KOZIKit “playset” includes: Frank Kozik, a Smorkin’ Labbit toy, a Man’s Ruin record, a Beastie Boys poster (bonus points for working sad current events into the KOZIKit), a Desperate Measures book, a pile of money, a Monger/grenade toy, a wrench, man’s best friend: a big pile of money, and man’s other best friend: Edward Goralsky the studio cat. 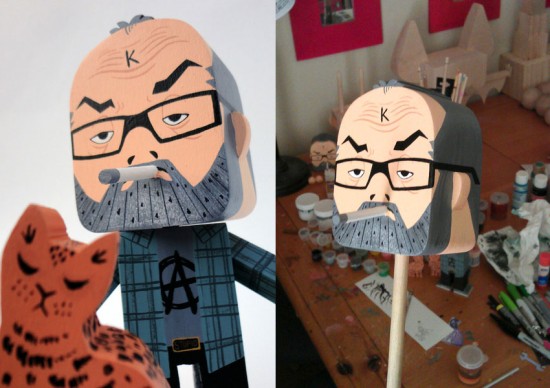 Doesn’t Frank’s head look like a cake pop? [Attention Betty Lou!] The KOZIKit makes its debut tonight in Cincinnati at “They Came From the Streets”, a custom toy show featuring “works of art inspired by the world of street art and graffiti”. This is a curious curatorial move if you ask me. If Ham, Kozik and me were in a lineup, and you were forced to choose which of us was the most ‘street,’ I think it would be a difficult decision. (In which you’d ultimately choose Kozik because he’s the biggest.) 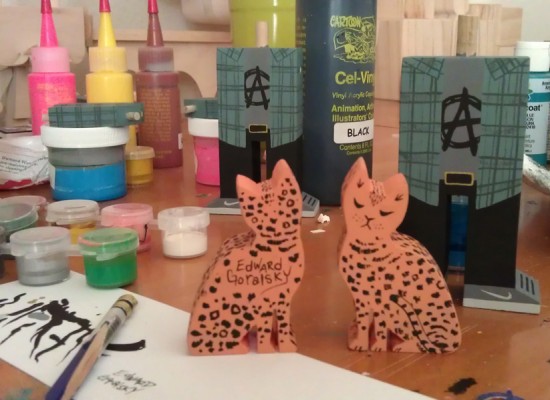 Speaking of choosing Kozik, I asked Gary to talk a little about why he decided to portray Frank Kozik:

I chose Kozik because well, he’s Kozik, the man who’s done a billion toys! He’s easily recognizable and has many things in his life that could be made into accessories that people could relate to as being ‘Kozik’.

Aha! Evidence of a solid Kozik brand! But what does Frank think of his encomiastical effigy? He likes it, though he points out that he doesn’t actually wear Nikes. When pressed for possible additional artifacts that might have been missed in Ham’s tribute, Kozik replied, “maybe a motorcycle.” Mrs. Kozik is also a fan of the piece. But what does Edward Goralsky think? Eddie thinks: “What’s for dinner?”

If you’re wondering why you see multiple Bengal cats in the photo above, choose your own answer: