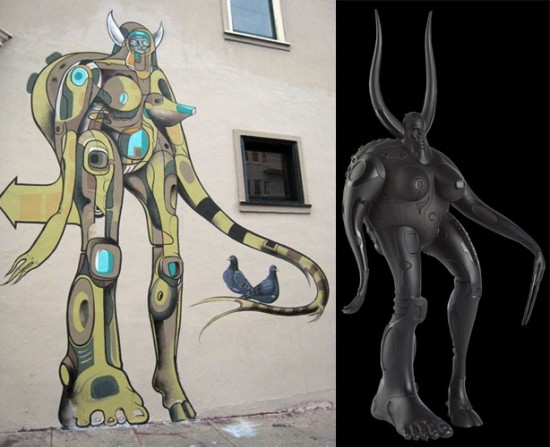 Kidrobot refers to its newest high-end release, The Goddess by Doze Green as “By far the most magnificent Kidrobot Black creation ever conceived.” Hmmm. It’s definitely a more ambitious or complicated piece than their previous Gary Baseman and Jeff Soto figures, and it’s just gotta be made better than that SSUR skull. But is a 20-inch Kidrobot-quality vinyl toy (edition of 200 pieces) really worth $500? If Baseman’s Midnight Magi is any indication, The Goddess will feel lightweight and come packaged in a simple black cardboard box. I’m curious what the “luxurious black and gold quarters” in which The Goddess is encased looks like. Good packaging adds value, and conversely, the Midnight Magi’s box, as a first point of contact with the piece, set it up as being rather cheap.

I like Doze Green’s characters, and I think his work can translate really well into 3D. But he’s a curious choice for KR Black. It seems that Green was selected for the project when founder Paul Budnitz was still involved, as Budnitz was known to be a fan of the artist. I miss the colors in Green’s street art with the all-black figure, though. Here’s part of the PR for KR Black:

In the color restrained world of Kidrobot Black, artists transcend current confines of technique and expression to both innovate in existing formats and promote the exploration of new ones.

The problem is, Doze Green IS an innovator, and one could argue that his street art already explores new formats. His previous work–even his other toys like Travela–seem more advanced than this one. Don’t get me wrong: I wouldn’t refuse this figure if it turned up on my doorstep, but for $500, I’d rather pay my rent and visit the Lower Haight where I can see this full-color character on the wall for free.