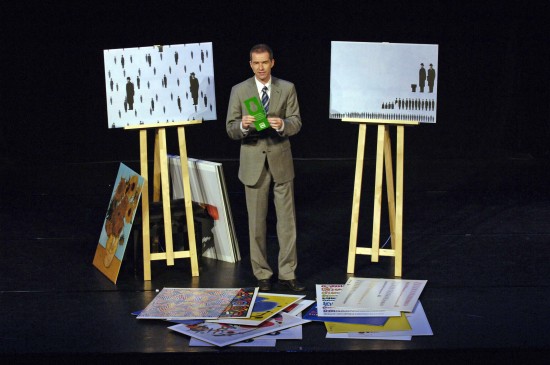 Perhaps two of the most seminal tomes on the topic of OCD art were published in 2003 (Tidying Up Art) and 2007 (More Tidying Up Art). A hilarious TED talk was filmed in 2006 and posted in 2008. Today, Swiss artist/comedian, Ursus Wehrli‘s work is going around the Web, and I’m so glad to have found out about it. We now have a spokesman for the cause! 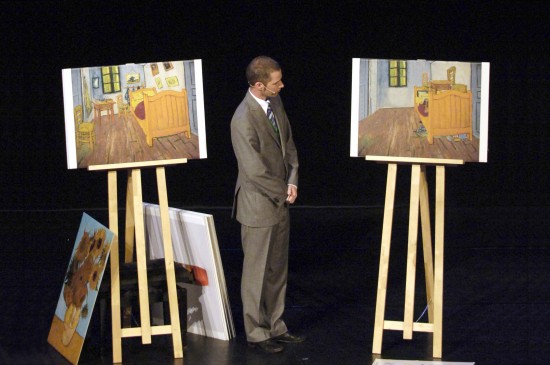 Wehrli says he got the inspiration to tidy up art from the door-hanger cards at hotels that signal one’s desire for a visit from housekeeping. Naturally, that lead to him organizing Van Gogh’s bedroom and putting Jasper John’s splatter paint back into cans…

He even takes on Keith Haring. He’s joking, of course, but there really is some merit to the data you can pull from art when it’s organized like this. For instance, just how blue was Picasso’s blue period?

Take 15 minutes from your chaotic life and watch Wehrli put it all in order for you. Wehrli has a new book coming out, in which he organizes common objects. The images I’ve seen have all the obsessive compulsive elegance of the Things Organized Neatly tumblr PLUS you can hold it in your hands (just lightly touching the corners of course). Click through for a preview of the before and after pictures you can expect to find in Wehrli’s upcoming book. I love everything about this.

[via DesignBoom, PSFK and We Waste Time]