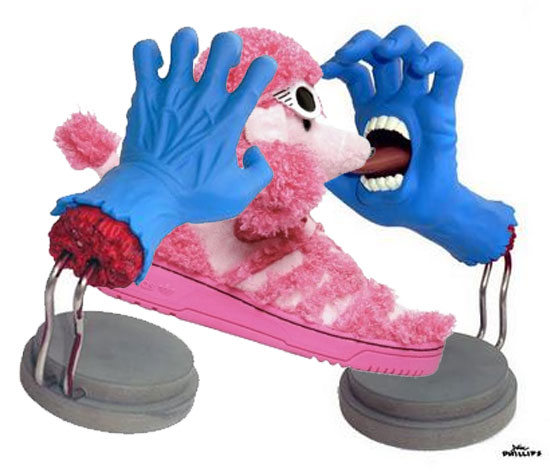 TALK TO THE HAND.

Well this is just wrong. It seems that fashion designer Jeremy Scott has created a collection of clothing using well-known skate graphics designed by Jim and Jimbo Phillips. And when I write “wrong,” I’m not only talking about the dude wearing cheetah print SPANX with a Phillips graphic sweatshirt (below left), but the fact that Jeremy Scott used all the iconic imagery without getting permission. (This Jeremy Scott ripoff collection is SO not fierce.) 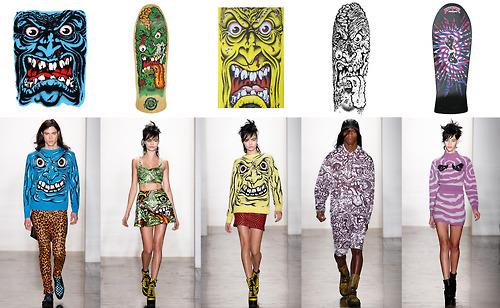 Jimbo Phillips only found out about Scott’s collection after its runway debut. Robert Denike, CEO and President of Santa Cruz Skateboards had this to say:

We had never heard of Jeremy Scott until it was brought to our attention. This is not a collaboration or under license, nor did we or the Phillips family approve the use of this artwork on his apparel designs in any way. It’s obvious to us, the Phillips family, the fans of Jim Phillips Sr. and Jimbo Phillips, and fans of the brand Santa Cruz Skateboards, as well as many in the global skateboard and skate art community that there is clear and obvious infringement by Mr. Scott. We are discussing this with our legal team to determine our next steps. 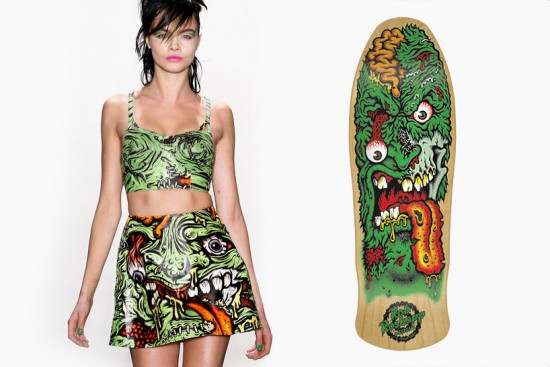 These two artists and this brand are iconic. Any true fan of skateboarding will tell you how the Phillips artwork style, this brand and the activity of skateboarding has positively influenced their lives. It may just be artwork to Mr. Scott, to be used and thrown away by next season, but these artists and brand mean a lot to many people around the world. And by the looks of the outcry on social media, skateboarders and non-skater’s alike are angry to have two of their most favored artists and one of the original true skateboard brands violated in such a way. I hope that Mr. Scott sees that his actions have hurt and affected many people, including the Phillips family, and that he has also severely damaged his own reputation. It is not too late for him to do the right thing, as an artist and creative person, and fix his error in judgement.

But what’s the right thing to do after the fact? Should Jeremy Scott pledge some of his profits toward building public skate ramps? I guess it’s important to mention that this isn’t the first time Jeremy Scott has lifted his looks from the pop culture canon. But Scott is plagiarizing Jim and Jimbo Phillips. He’s repackaging the Phillips style without transforming it. He’s trying to use the cultural cache of skate graphics to further his own for-profit fashion brand. And he’s doing it without attribution.

Tyra Banks would never smize about this. And Heidi Klum would give Jeremy Scott an auf wiedersehen. And so will I. 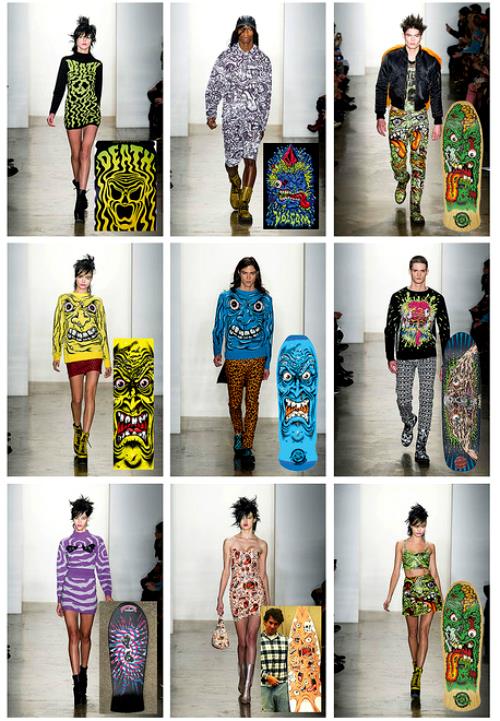 [Two years ago, I wrote about a Jeremy Scott hoodie. See Leopard Cosplay is the New Tiger Blood for that.]