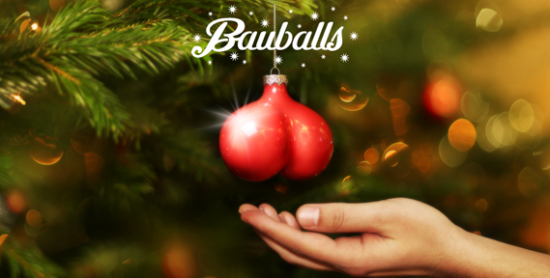 In some states, you can get a ticket* for adorning your car with “anything resembling or depicting ‘anatomically correct’ or ‘less than completely and opaquely covered’ human or animal genitals.” But the government can’t get you for putting testicles on a tree in your own private home! 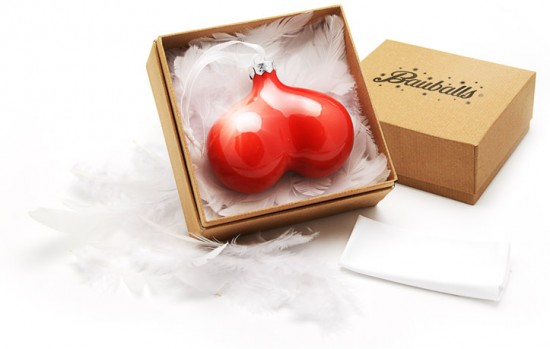 Orchid Cancer Charity is selling the Bauballs above through the cheeky awareness-raising site: http://www.checkyourbauballs.com 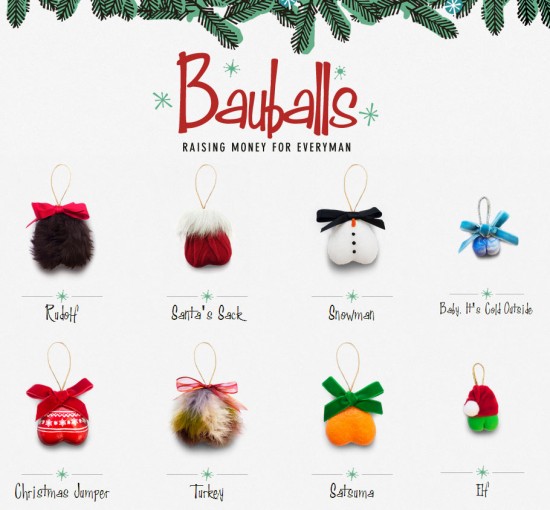 Elsewhere in the UK, Everyman Male Cancer Charity, is hocking some nutsacks of their own: http://bauballs.co.uk.

Nobody wants lumps of coal or lumps of cancer for the holidays. Get some bauballs instead! Click through for some animated gifs to help you check your bauballs.

* For every person who has failed Wikipedia’s notability test, here’s your moment of zen: On Wikipedia, “notability” is a test used by editors to decide whether a topic can have its own article. Wikipedia defines notability as “worthy of notice”. I’d like to now present the Wikipedia page for Truck Nuts. If I may permit myself to quote:

Truck nuts, also known as Truck nutz, truck balls, BumperNuts, BumperBalls, CargoNads, Drive-thru Danglers, Trucksticles, HitchNuggets, Balls-on-a-truck, or, as they are known in the United Kingdom, Bumper Bollocks, are plastic accessories for pickup trucks and other vehicles which resemble a pair of dangling testicles. They appeared in 1998 in the United States, and were first sold on the Internet in 1999. Truck nuts are usually hung for humor or amusement.