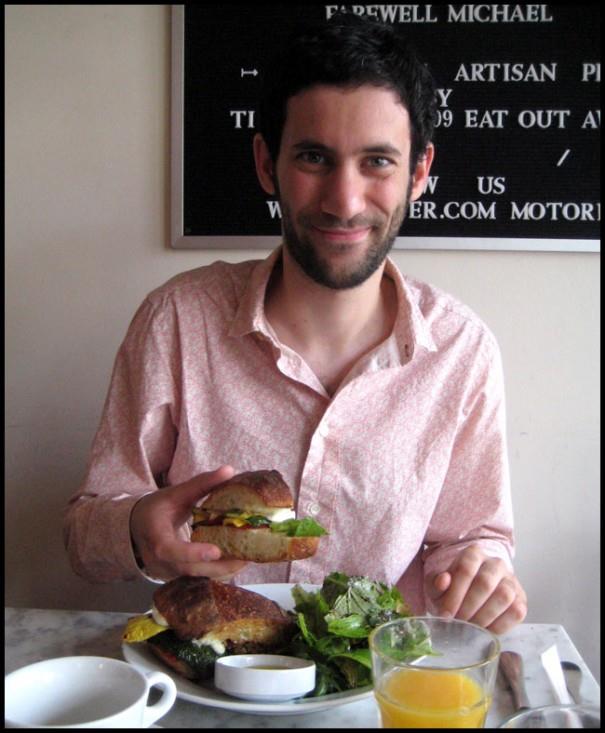 Perfect opportunities like this don’t come around very often, so when they do, it’s just…bashert. In late June, I got to meet up with Jon Burgerman in my birthplace of Brooklyn, eat (and of course, photograph) salads and talk about our neuroses for Heeb.  The interview was posted today at Heeb’s blog. [UPDATE: R.I.P. Heeb. I’ve re-posted the full-text below.]

Jon Burgerman is the English artist responsible for making “Doodler” a viable career title in the LinkedIn lexicon. Since 2001, Jon has been drawing characters on everything from T-shirts, toys and sneakers to airline sickbags, umbrellas and wallpaper. He’s got a brand (Burgerplex), a blogography (Doodlesplatter) and a portfolio of clients that includes Pepsi and Nike. Jon’s summer in New York is drawing to a close, so here’s your last opportunity to catch him on our side of the pond. On August 14th, see his new band, ANXIETEAM, “perform” at Brooklyn’s Factory Fresh. On August 15th, stop by Giant Robot New York for his solo show, My American Summer. Heeb recently caught up with Jon to talk about art, anxiety and parents over salads in Williamsburg.

Jeremy Brautman: You’re well-known for drawing on walls. Did you draw on walls in your house growing up?

Jon Burgerman: I drew bits around light switches and stuff. My mum didn’t like me doing that. I would get in trouble at school for doodling, but I couldn’t help it. It wasn’t like I was trying to wind up the teachers or be mischievous in any way. I used to draw in condensation when I walked past a window that was all steamed up. That’s not even permanent; just wipe it!

Were your folks encouraging about you getting into art?

They were up until a point. My mum studied at art college, and she kind of said ‘maybe you should be a graphic designer, not an illustrator.’ I never really had any ambition to be any of those labels. I just wanted to make stuff, make my work. But she was very much like…’maybe you should do something with a job.’

Do you have stereotypical Jewish parents?

Well…they are Jewish. You can’t go round to the house without them loading you down, like take this, take that, I’ve made you this, here’s some frozen challas. It’s like we don’t have food back where I live! I’ll go home on the train, and I have to buy luggage for it. But they won’t listen. They say, ‘You look thin.’ It’s kind of nice, I suppose but I really hate schlepping stuff around. See how I worked that in? It does seem like I’m being really ungrateful…

That’s part of the whole carefully orchestrated cycle. They’re doing their job to fatten you up, and it comes with the expectation that you’re going to be somewhat ungrateful about it so that they can then guilt you for it.

Yeah, as soon as you enter into that dance, it lasts a few hours and ends badly. But lets face it; you always end up taking back a giant bag of bagels.

Speaking of bagels, how are they in England?

Bagels in the UK are absolutely horrible, apart from a few Jewish bakeries you might find in London and Manchester. On the whole, if you go to a supermarket or a general sandwich shop and get a bagel, it’s just horrible.

Yeah. I find it offensive. I find it slightly anti-Semitic, actually. I find it a slight on my people.

Agreed. Back to art for a moment. When you start a large-scale doodle, you’ve said you kind of have a clear head at the time, and I was curious if you’d liken it to the mental state of “diving in” David Lynch describes in…

You’re trying not to think about the job at hand. Thinking about it means you scrap around and you start this tailspin of panic. It’s best not to try and think about it. Your brain and your hand and your eyes kind of take over. Everything is functioning, but you don’t have to think about it too much. You get to a point where you’ve started it and you wake up from that a little bit and you realize: oh it’s ok, I’m doing it, it’s going ok, look what I’m doing, oh that’s the way I’m going…and then your brain starts to connect it together. Just tune out the noise enough to get it going while laying the architecture for the piece, then go around and furnish all the rooms.

I got approached to do a range of Christmas cards. If they had said Chanukah cards, I would have probably done it. I’m sure I’ve squeezed in the odd dreidel into those things. I did feel a little bad, but that’s ridiculous really. All it needs is someone to invite me to do it for them. I’m not self-producing these things.

Your Mom give you some guilt?

Oh yeah. ‘Where are the Chanukah ones?’ The reason is, they just want free stuff. They take all my stuff if they can use it. I did birthday cards and it’s like, ‘Oh great, we don’t have to buy any cards for a while.’

I guess there are stereotypes for a reason. I don’t know. They want free stuff. But who doesn’t want free stuff? I never use this stuff: they give you a whole big box. I have four friends, it’s like who am I gonna send all these cards to? I’m happy someone’s using them.

OK, I’m putting the word out to Heeb readers that if anyone wants to do a range of Chanukah cards…

If they want to do a range of Jewish themed gift-cards in my style, maybe a little latke person or something, I would entertain the idea.

The wallpaper you did for that same company went viral.

Yeah, I was really pleased. That was a stupid idea I had, and they actually made it. That was a rare occasion where I had an idea for a product. I do all these drawings and people color them in and I get asked so many times, ‘Can you come into my house and do this?’ It’s not practical obviously, so I thought: why don’t we make some wallpaper? And it’s been really popular. I was happy. You shouldn’t do a whole house in it or anything.

When people look at your work, they see colorful characters and whimsy, but underneath, it’s um…seething with anxiety. What are some things that make you anxious?

Same stuff everyone has. Am I going to die? Is my fruit going to go bad? Have I turned that off? Is that going to explode? Why did I buy that jacket? I’m never gonna wear it…

Do you find anything particularly helpful?

I think sleeping is good. Exercise is good for you. You should exercise. I’ve jogged around Prospect Park a few times. It’s horrible. But you feel good afterwards.

England and America are very different when it comes to complaining. Do you feel like our culture has seeped into you this summer?

I’m the sort of person that’s like, ‘oh this salad’s got fish in it?’ I’ll just quietly hate myself for eating it; I don’t want to cause a fuss. I’ll just suffer in silence and go home and scream into a pillow. We’re very repressed. In general, we don’t complain: we’ll just shuffle off.

How is an entire national culture so different?

Little island. We don’t want to get invaded.

Is it amusing when you see drama here?

There was a guy on the plane, and I hated this guy. He complained, and he pestered. Everyone was nice to him, not because they liked him, they just wanted to keep this guy schtum. I hate that. I hate the thought that people are being nice to me just to calm me down.

I should just leave right now then.

There’s something comforting in people being a bit rude actually, at least they’re being honest.