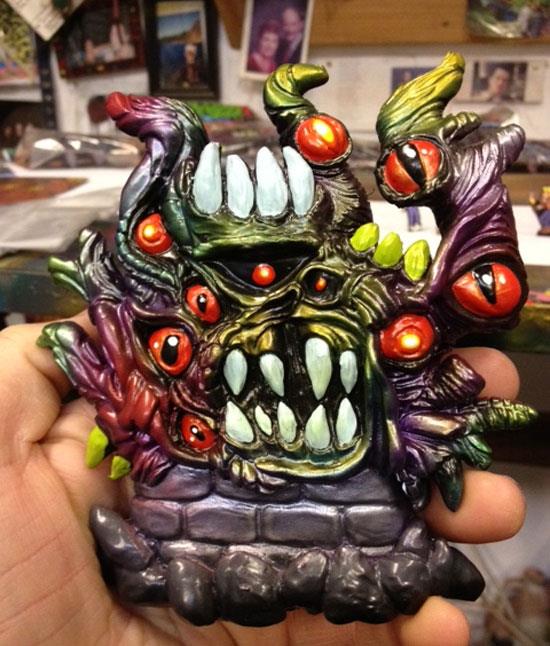 Let it be written that the 3rd week of January, 2012 is truly the time of the author/artist convergence. To recap: Stephen King as an action figure by Mike Leavitt and Oscar Lynchworthy, the limbless critic by Doktor A. Today, witness local artists, Skinner and Jay222, and their ambitious project to visualize the writings of author, H.P. Lovecraft.

Skinner describes the project as “a sort of educational introduction to the strangeness and depth of weird horror that Lovecraft is the father of…” and explains its genesis:

I’ve loved Jay222 since I met him. [ed note: ditto.] I wanted to do a mini run of H.P. Lovecraft figures and make them limited and special. [I gave Jay222] some weird Stuart Gordon adaptation films of Lovecraft stories, sent him some sketches, and he’s been working hard ever since.

The duo will be releasing a new edition of ten Lovecraft-inspired art objects each month for the foreseeable future. Skinner sketches, Jay222 sculpts and casts, and Skinner hand paints. The series begins with an art piece in homage to one of Skinner’s favorite Lovecraft stories, The Colour out of Space. The story’s amorphous gaseous evil is cast in resin, and while both artists and author are American, they’ve all chosen to include the additional vowel “u” in “colour” that my inner anglophile adores. 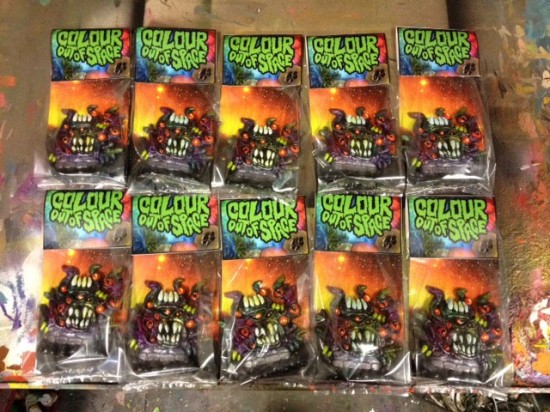 The Colour out of Space piece is 5 inches tall by 5 inches wide and comes with an additional diorama featuring farmers, a kid and a protective dog. Says Skinner:

It is horrible to behold. Watch it emerge out of the well and descend out into the ether! Stand it up, place the scenery behind it and put the scared puny mortals in front for a full scene of cosmic horror…

It costs $100 and will be available for sale on Monday, January 23rd. You can get them directly from Skinner by contacting skimmerdog2003 [at] yahoo [dot] com. Want to understand what this is all about a bit more? I did, so I had a quick chat with Skinner. 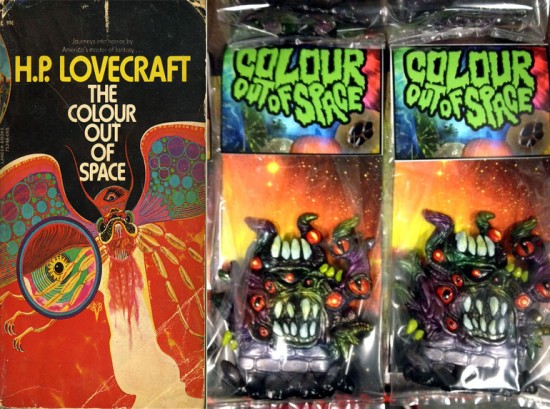 JB: When did you discover H.P. Lovecraft?

Skinner: When I was in the 7th grade, my best friend had an older brother who was an ultimate book worm nerd lord. We played D&D, and I learned a lot from him. I started reading Lovecraft, and since I had kind of a high vocabulary for my age because all I did was read dragon lance novels, I could figure out some of his old timey verbiage. It’s old and the wordage is very intense. It’s mostly used to paint a sort of overwhelming horror that your mind has to put together. He would use all kinds of back story to get you deep into the paranoia of the tale. The descriptions had the entity or horror just lurking outside of your obvious understanding. No one has been able to do the same since, in my opinion. 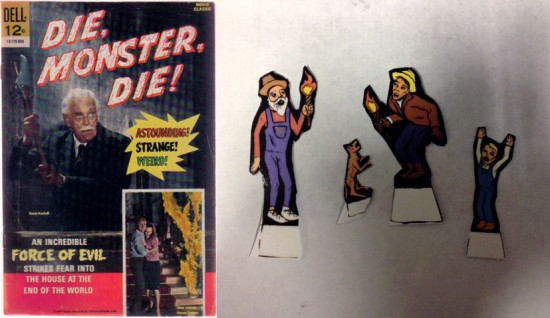 JB: Why do you think you connect with Lovecraft’s work?

Skinner: Because its for people who are part misanthrope, part thinker and part philosopher. It’s all based on fear…creating a massive paranoia of fear…fear of what you don’t understand or know. Lovecraft tried to get people out of their heads a little bit. Why shouldn’t a higher life form be in the realm of what we couldn’t understand? It sounds correct to me.

I’m not a fan of blood and guts. I grew up around actual bloody violence and psychological pain, and I think it’s kinda boring, lowest common denominator kind of stuff. It’s easy. A guy in a mask with a knife? That’s fucking lame…Give me 3 million year old  plant, reptile, fish beings that sail on solar winds and create a race of globular sinister shoggoth slaves…

Lovecraft has a way of taking you somewhere, and you can’t go back. I mean the dude made Satan look boring as fuck you know? 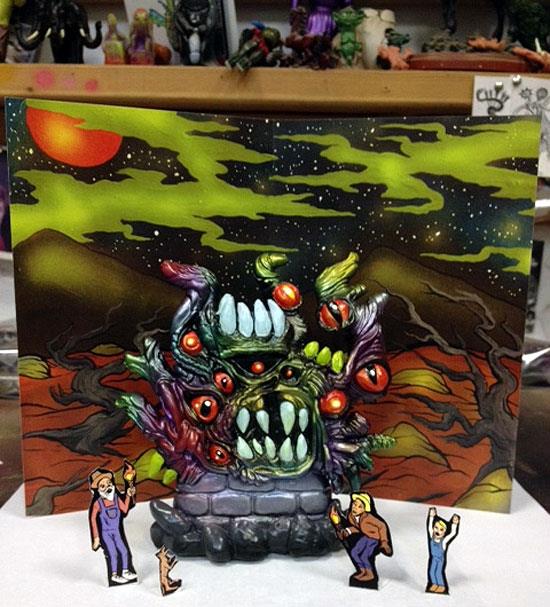 JB: I’m starting to find out… so how’d you meet Jay222, your collaborator in this project?

Skinner: I think I met him in Sacramento, but I remember really being struck by him at Comic-Con two years ago. His big-ass smiley face was great! He has just been a totally present person: sincere and easy, my favorite combination. The fact that he is really talented was some icing!!! 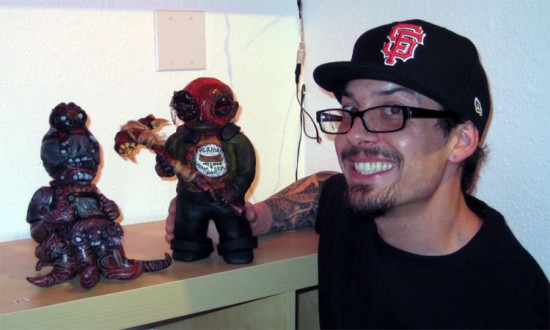 JB: I wonder if you’d describe me as “sincere and hard”? Haha. So how’d you bring Jay222 into the Lovecraft project?

Skinner: Jay222 asked if I wanted to do a project together, and it just struck me that this might be the one. He has been moving on it ever since.  Two of the figures are done, so we’re ahead of our monthly schedule…That’s what I like! 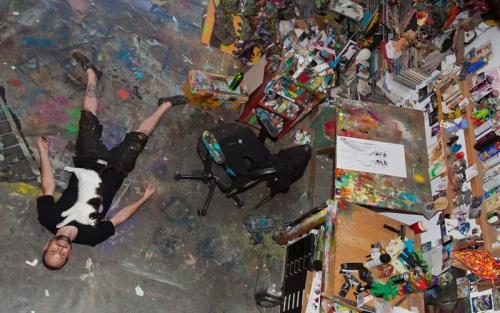 My interest has been piqued. How about yours? You can probably find tons of Lovecraft’s books at your local used bookstore (which hopefully still exists). Get to reading The Colour out of Space this weekend, and then pick up the original art figure by Skinner and Jay222 on Monday. Email Skinner at skimmerdog2003 [at] yahoo [dot] com to show your interest.