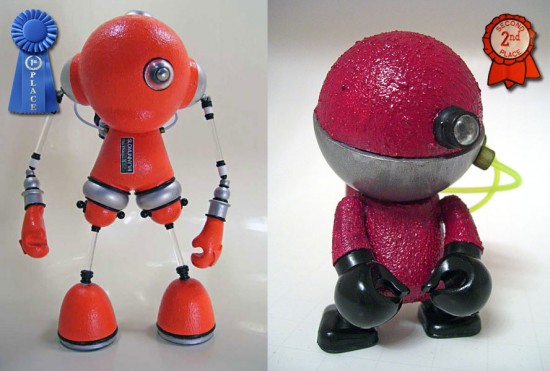 Mike Slobot is an artist and a storyteller. Each of his creations is a character with a background (and a future). Many of Mike’s customs begin with a platform toy, but finding the DIY toy within the Slobot can be a game of “Where’s Waldo?” His customs really become originals–part of the ongoing Slobot series. ToyCyte isn’t the only blog to take notice of Mike’s work. Gizmowatch and BoingBoing both profiled slomunnyV3, calling it “The Cutest DIY Mini Munny Ever” and “a Post-Apocalyptic Cyborg Lemon,” respectively. With accolades like that and Mike’s upcoming solo and group shows, you won’t want to miss out on…

Mike is offering two prizes. First up is the slomunnyV4 whose provenance includes the Toy Box Apathy show in Las Vegas earlier this year. The figure is built around a custom 7″ munny (approx. 12″ with new legs) and features lucite limbs, found objects and articulated arms and “glider” wings. SlomunnyV4 was a Martian Agriculture Robot deployed to Mars before the first settlers arrived. His task was to begin growing desert plant species in an effort to increase the oxygen content of Mars. Now that Mars has been settled for many years now, slomunnyV4 needs a new job. The Martian Farmer robots have all been upgraded and slomunnyV4 now has no job and would like to relocate. He will need a new job based on his skill set. What career would you give this red robot with the green thumb? Best answer wins!

Next up, Mike created a brand new 3-inch slotrexi-04 just for custoMONDAY. This custom is built around Play Imaginative’s Trexi platform figure, and he’s ready to join the rest of the Slobot gang. But he is missing a story. Who is he? What does he do? Best answer wins.

You can enter to win both prizes. 1) Come up with a new job detail for slomunnyV4. 2) Pen a little story for slotrexi. All entries must be received by midnight (PST) on Sunday, November 23rd. Winners will be announced on Monday, November 24th. Keep tabs on Mike Slobot on his website, blog, Flickr, MySpace and shop. Currently, Mike’s got custom Qees, original polymer clay figures and watercolor paintings for less than $25 each on etsy here. You can’t beat that. Guaranteed to quadruple in value. Take my word and don’t sleep on this stuff! 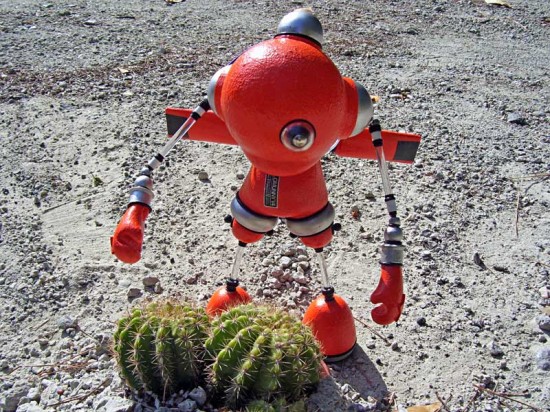 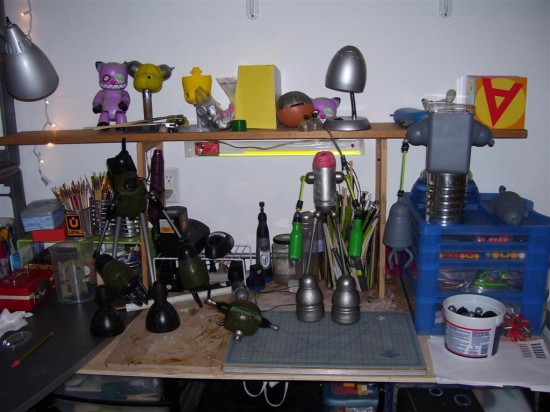 [This article was written for ToyCyte and first published on 11/17/08. I am reposting it on my own site because 1) I wrote it,  2) It’s a nice record for the artist and 3) ToyCyte is no longer online. You can download a PDF of the story, as it originally appeared (including reader comments), by clicking HERE.]