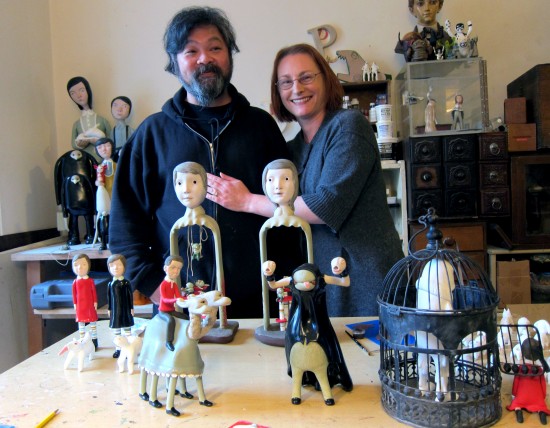 Cassie and Ernie Velasco have been making figurative art for five years as Doubleparlour. They currently reside in the artful Lower Haight neighborhood in San Francisco, a city they’ve called home for the last sixteen years. Cassie has a B.A. in fine art, and Ernie is a self-taught artist with former incarnations in a punk band and as a pastry chef. This Thursday, July 5th, Doubleparlour will present new work, alongside Jonas Lofgren, at Spoke Art. I recently visited with the couple and chatted them up about their process, their secrets and the importance of limbs. 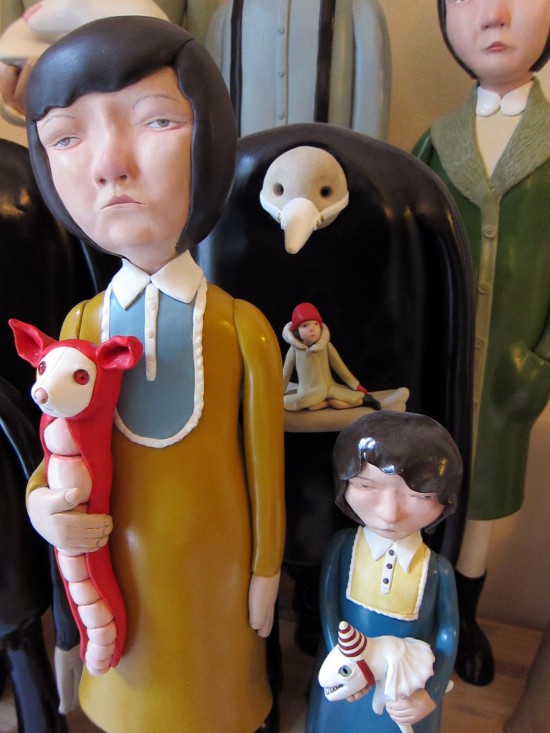 JB: Could you walk us through a little of your process?

CV: We use Magic-Sculpt, a two-part resin with a clay-like consistency. The first step is to build the armature (aluminum, wire or styrofoam) and then skin the form with resin. The sculptures are formed in steps: usually the face first, then the torso, and then the limbs. Each step involves hand sculpting and then allowing the resin to air dry over night. After that, the next component can be formed and added to the piece. This part of the process usually takes a few days. Once the resin work is finished, the sculpture is sanded, painted and varnished. 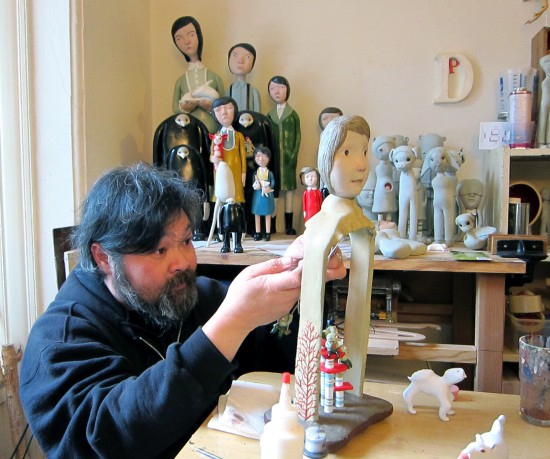 The resin is very strong and durable. We used to use polymer clay (when we first started making sculptures). Clay was awesome to work with; however it’s fragile and becomes brittle over time. We switched to resin for it’s strength, and also, we wanted to make bigger pieces that weren’t possible with polymer clay. Years ago, we saw a tutorial on using polymer clay from John Casey on the Fecal Face website…..and that’s where this sculpting business all began for us (in 2007). 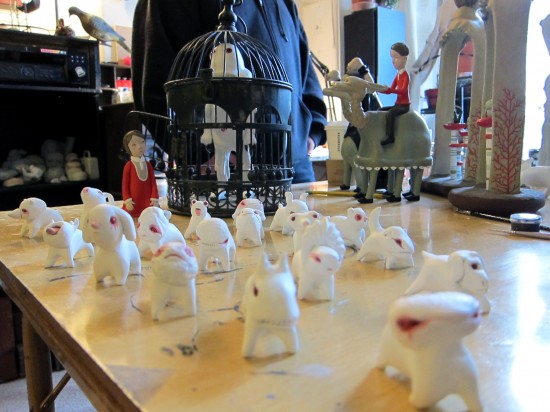 What are some things that were on your minds or in the background while creating the figures for your Spoke Art show?

We listened to Mt. Eerie (Clear Moon) and the Liars (WIXIW) while creating the pieces. We recommend those albums. 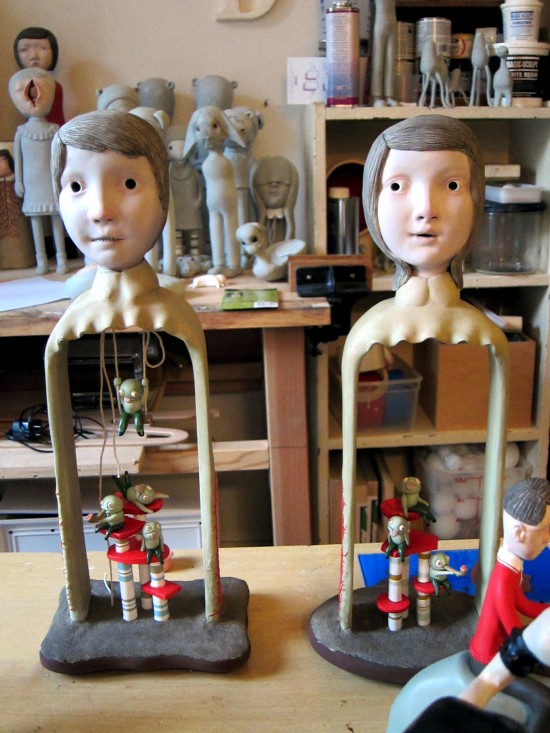 What can you tell us about the two large pieces featuring the happy, playful creatures on the striped cat trees?

What started out as playground structures for the white creatures (originally housed within mausoleums) turned into places for the mischievous and up-to-no-good little bog ruffians (green creatures) to smoke their pipes and swing. 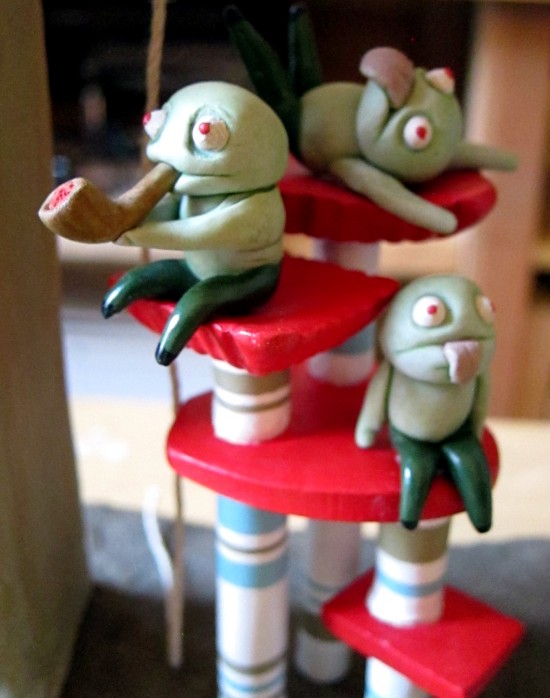 Some of your characters have missing or elongated limbs. Could you tell us about this? (P.S. Have you heard of a condition known as Alice in Wonderland Syndrome?)

I hadn’t heard of AIWS before, but I have heard of the psychological disorder BIID, where people feel that one or more of their limbs shouldn’t be there and will seek to have it amputated. I guess we sort of have a fascination with the whole concept of limbs: they shape one’s movement, mobility, strength and independence. We’ve created pieces that address a being’s integral relationship with it’s limbs. For example, we’ve made sculptures with missing or prosthetic limbs and anthropomorphic or plant (root) limbs. Pay attention kids: the moral of the story is don’t take your limbs for granted! Now go sit in a corner and think about that… 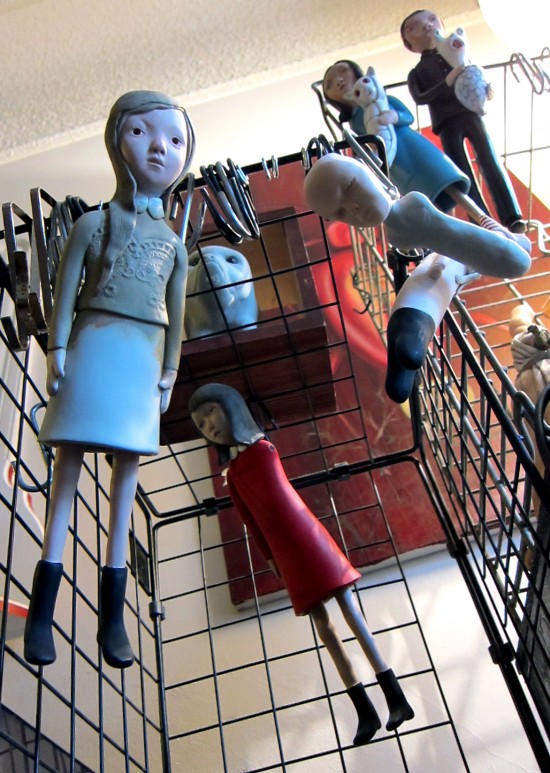 Ha! Your collaboration is so fluid. What’s your secret?!

Ernie is very obedient…ha, ha…just kidding…I think I actually meant Ernie is very patient with all my nonsense. We just work well together, which is really lucky. Each piece starts with an idea, and the direction the sculpture takes belongs to the person with whom the idea originated. At minimum, we collaborate on all pieces as far as discussion and feedback goes (we constantly bounce ideas off of each other), and on some pieces we’ll build components or paint together. Some pieces get worked and re-worked till they feel finished, and others are a walk in the park…I guess, one just knows. 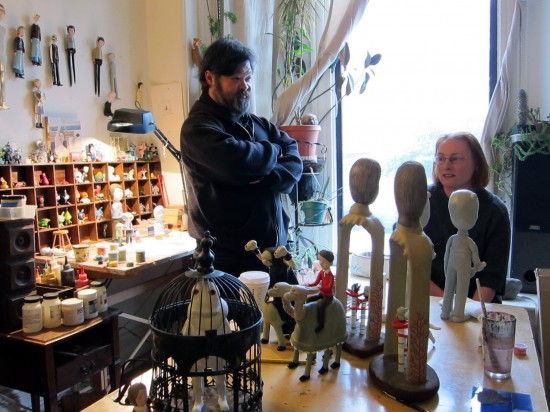 Having decided that polymer clay is not a long-lasting material, what other materials/mediums are you interested in experimenting with in the future?

We’re happy with resin at the moment…it’s nice to work with, and it’s a material we can make at home (no kiln required). In the future, we’d like to incorporate fabrics, leather and perhaps other materials in our sculptures. Presently (or in the past), we’ve incorporated  antique found objects, railroad miniatures, hemp thread and taxidermy (antlers, claws, glass eyes) in with the resin figures. 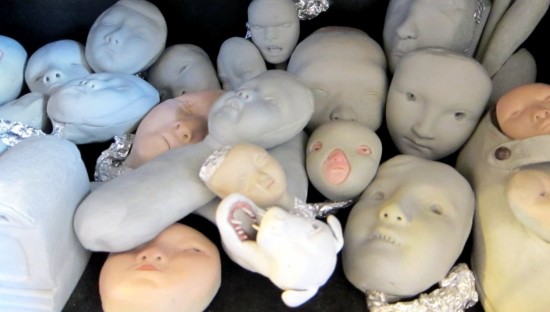 All (or the majority) of your pieces are 1/1 originals, even if the characters themselves repeat throughout. Could you talk a little about your reluctance to create multiples at this time?

Casting definitely has the appeal of being able to mass produce one of our art pieces (and it’s much more profitable). However, we aren’t creating multiples at this time since our focus this year has been on gallery show production. We’ve thought about exploring casting with a character(s) in a limited edition run. It’s funny you ask, since just recently we’ve been toying with the idea in our heads. If we were to cast, it would take away the sculpting and leave us with the painting part of the process, which we enjoy, but not as much as sculpting. I guess we would just prefer to have someone cast the pieces for us (someone with professional casting skills). One of the most important things that we like about creating originals is the endless creative possibilities that exist when building something from scratch (as well as the variety of sizes and shapes in which a single character can be reproduced: like our BugBears). It’s just awesome to start with a piece of foil and see what evolves. 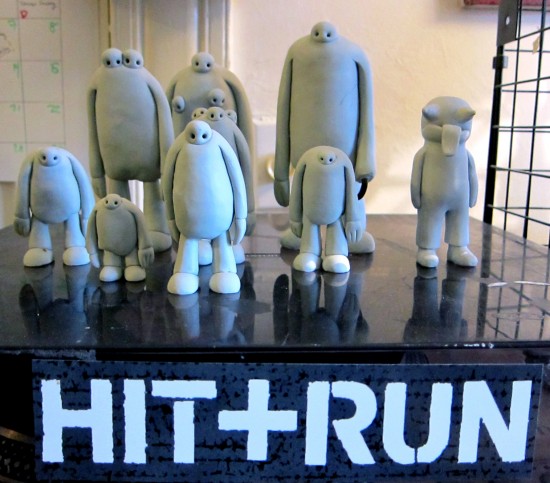 What are some of your favorite pieces (by other artists) that you’ve collected together?

Hmmmm, so many to choose from, but to name a few: J. Shea sculpture, Mars-1 toys, an early Michael Page painting, an Attaboy original, a Miso intaglio print, Patient No.6 figures, Sawdust Bear’s creatures and our collection of Jason (Norwegian cartoonist) books. 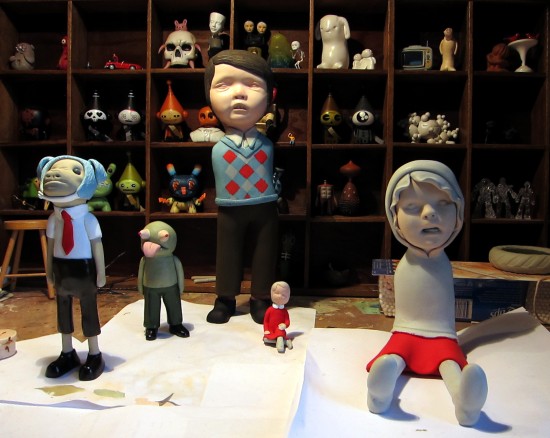 Thanks, Doubleparlour! Be sure to come say hi and see the show at Spoke Art in San Francisco this Thursday night. If you happen to place an online order at Doubleparlour’s etsy shop while Cassie and Ernie are at the opening, please be assured that their lovely tortoise cat, Parsley, will be handling all customer service in their absence… 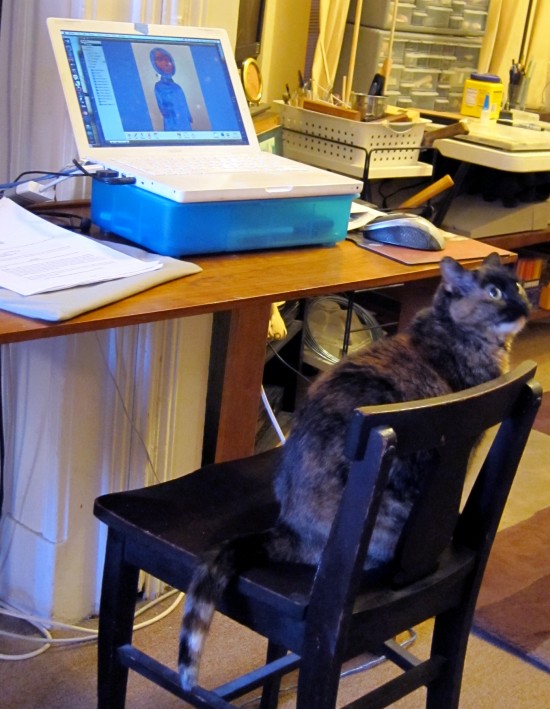