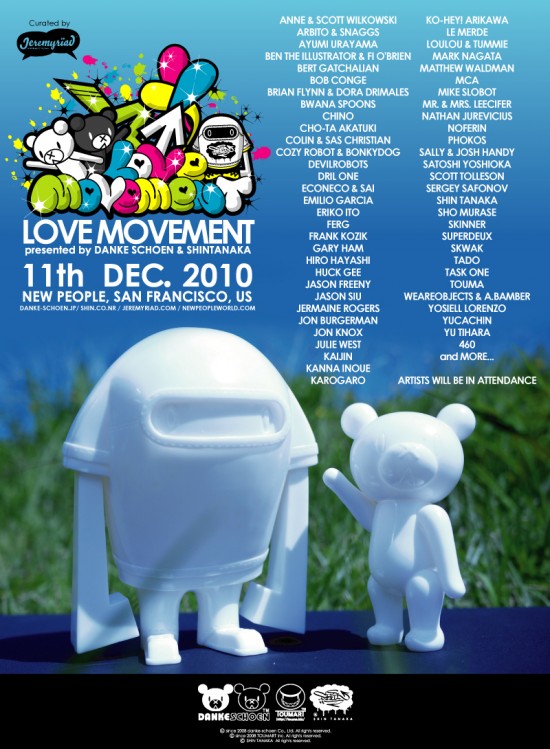 LOVE MOVEMENT is an art show using vinyl toys to deliver universally understood messages about love. American, Japanese and European artists were given blank versions of toys designed by recently married artists, Shin and Nao. The finished works will be exhibited at SUPERFROG Gallery in San Francisco with an opening reception on December 11th. Shin, Nao and many of the other artists involved in the show will be in attendance! 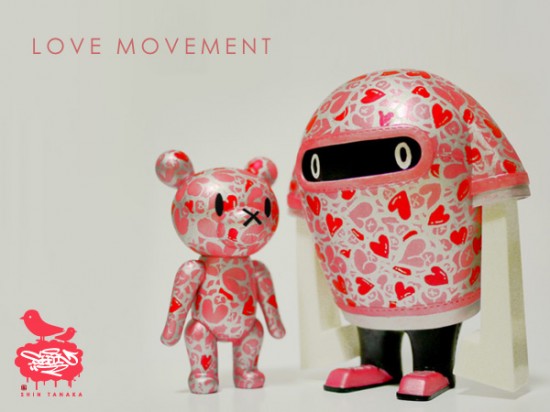 Love should be everywhere in our daily life.
Because Love is invisible, and we can’t touch it or buy it, we usually pass over it.
Modern society lacks Love due to a lack of communication.
If I want Love from someone, and I don’t give the person Love, it’s unfair. It’s wrong just requiring Love from someone.
If you start giving Love to people around you, Love will be everywhere, and we can live happily.
If the world were to embrace the Love Movement, it would solve many problems we have.
–Nao

Many creators put their Love into this exhibition. Please feel their Love.
Giving Love will bring even bigger Love back to you.
We can spread Love. That is the Love Movement.
–Shin

Shin Tanaka is a Tokyo-based artist with roots in the graffiti scene. In 2005, while searching for a new canvas beyond the street, he hit upon the idea of drawing on a toy. Using the experience of origami from his youth, he created toys out of paper. Shin’s paper toys are based on street culture and meant to be accessible to everyone. To date, over 500 artists and brands have joined his paper toy project, and fans around the world print, cut and assemble his designs. Shin has made paper sneakers for the NIKE Design Library in Portland and paper kimonos for The Museum of Far Eastern Antiquities in Stockholm. In 2009, he blended elements of fashion, art and hip-hop for his first vinyl figure, T-BOY. He has also designed functional art toys for Nooka and Mugo. His work is sought after by top brands including Issey Miyake, Scion, Disney and UNIQLO and has been shown in Berlin, Paris, Hong Kong, Shanghai, Osaka and Tokyo. His website is: http://shin.co.nr 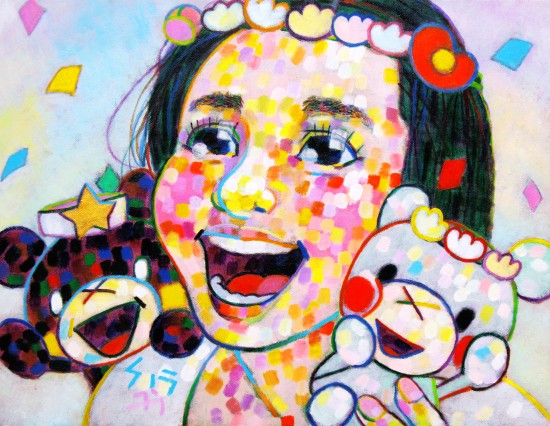 Naoko Shimojo majored in music at the Tokyo College of Music and briefly studied abroad in Vienna. Filled with inspiration, she returned to Japan and immediately reached out to TOUMA to create the mascots, Kurokuma (Black Bear) DANKE and Shirokuma (White Bear) SCHOEN. Nao opened the DANKESCHOEN online shop in 2008 and became incorporated in 2009. That year, she released the first DANKESCHOEN soft vinyl figures, which sold out immediately. In April of 2010, the DANKESCHOEN exhibition,”100% FREE,” debuted in Taiwan featuring the mascots customized by world-famous artists. Things only got bigger from there with huge DANKE and SCHOEN figures appearing in Misukoshi Department store and DANKESCHOEN participating in Asia’s largest toy shows, Taipei Toy Festival and the MANGA Festival. Nao continues to release high quality limited edition toys. You can always hear her original music compositions in the adorable animations on her website: http://danke-schoen.jp

Jeremy Brautman has been called many names, and “Toy Maven” is the one that stuck. A prolific writer, he began writing about toy art professionally in 2008. Jeremy made his curatorial debut with an ongoing custom toy contest series called custoMONDAY and was last seen putting together the Resin Toy Showcase for Neon Monster at Wondercon. He met Shin and Nao in Tokyo while on his honeymoon. He was freshly married, Shin and Nao were engaged, and Japan felt like the most welcoming place in the world. Love was everywhere, and Jeremy promised he would get the two artists a show in San Francisco. Shin and Nao are now married, and this is that show. Jeremy can be found blogging his head off at http://www.jeremyriad.com. 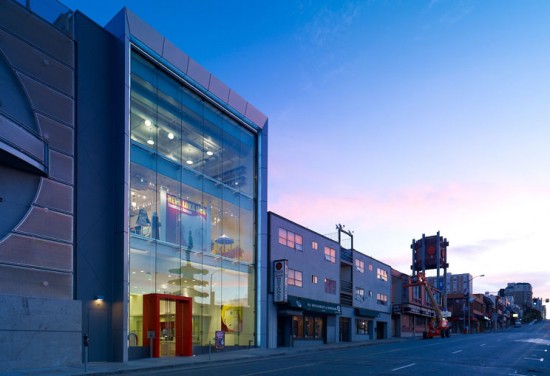 The state-of-the-art NEW PEOPLE building, launched by founder and CEO of VIZ Pictures and VIZ Media, Seiji Horibuchi, brings a new hybrid energy to San Francisco’s Japantown. With fashion, film, retail and art all under one roof, NEW PEOPLE provides a full-sensory cross-cultural immersion. The SUPERFROG Gallery spans the entire top floor of NEW PEOPLE and provides a direct link to emerging artists who draw their inspiration from Japanese popular culture. http://www.newpeopleworld.com