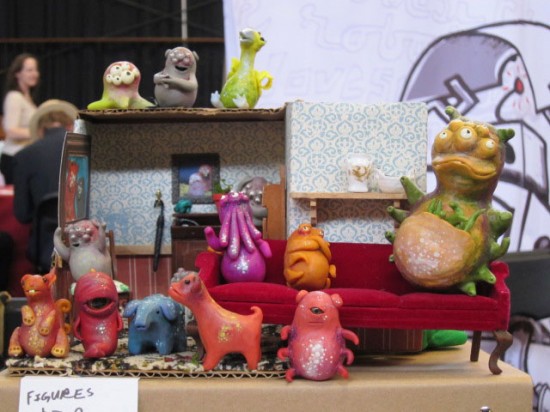 Hooray for those serendipitous moments when worlds collide. Waaaay back in February, LA-based Shing Yin Khor drew this rendition of Gangsta Mitch for Neon Monster. We kept in touch on twitter and followed her Specimen7 Flickr set. Walking down the aisle at this past weekend’s Alternative Press Expo, my two eyes locked onto the legion eyeballs shown above. I’m allowed to comment on the fact that Shing Yin is super-small due to a little-known principle called “shorty solidarity”. I mention this only as supportive evidence that she possesses contagious energy and enthusiasm that you’ve been warned not to underestimate with your heightist agenda. 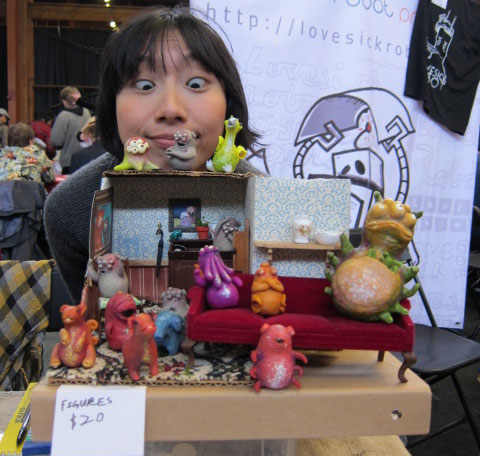 But enough about that. Shing Yin Khor’s principle character, Marlowe the Monster, has his own website, and for APE, she debuted a comic featuring clay Marlowe installed in small dioramas. I’m a fan of monsters and dioramas, but what makes this comic exceptional is the black humor Shin Yin brings to the book.  While not strictly an “adult comic,” Marlowe does find himself questioning the reliability of Facebook profile photos, navigating the issues of asexual reproduction and finding himself unimpressed with the realities of lesbian sex. Each page is a panel with a photograph of Marlowe and a tight one-liner, such as this gem: “It finally occurred to Marlowe that fourteen years was an awfully long time for his father to be on a business trip.” 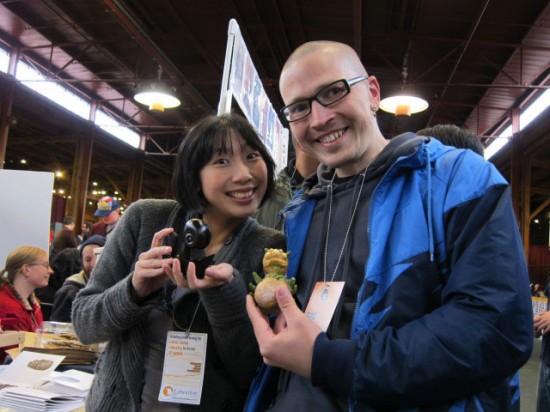 Mutual fandom is fun, but call me Comcast, because I like the triple play. It just so happened that Sergey Safonov was visiting San Francisco during APE, which naturally lead to lots of hugging and resin Wanderers meeting clay Monsters. Shown above: Shing Yin with Kluth and Sergey with Oopy. (You’re welcome if the unparalleled level of nerdery in the previous sentence brought you to geekgasm.) 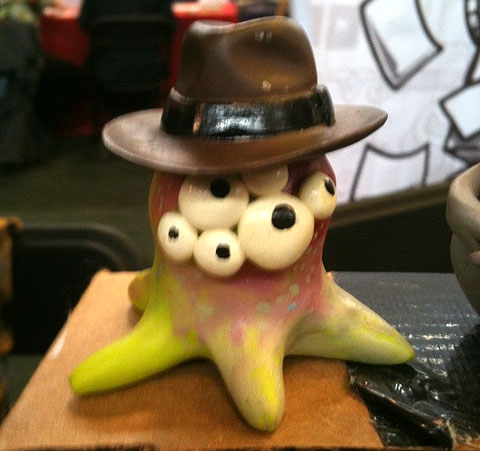 Before we parted, Sergey imparted this monster with Godot’s fedora as part of the Flying Fedora tour. Keep tabs on Shing Yin here. Any remaining monsters from APE may show up on her etsy shop here.