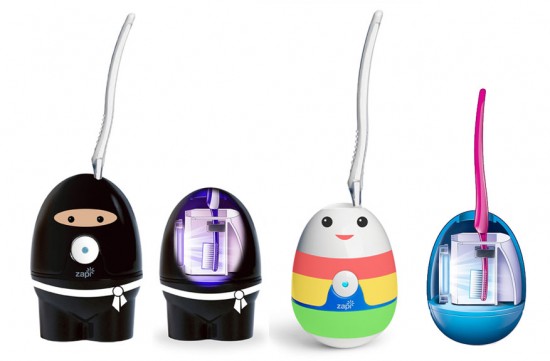 We’ve all probably seen those infomercials implying that if you don’t sanitize your toothbrush, you may as well be rinsing your mouth with toilet water. Here are a few more sexy factoids:

Feel like you need to do a quick gargle with Purell? I know what you mean. Somehow, I’ve managed to remain immune to this hype-o-chondria (though probably NOT immune to airborne toilet flush-induced bacteria), until seeing these Violight Zapi toothbrush sanitizers. The company claims that the Violight Zapi kills 99.9% of bacteria on your toothbrush, and they do it with a level of cuteness that feels familiarly FriendsWithYou or Shawnimals. The sweet sanitizers do their deathbringing through light, though my understanding is it’s kind of a behind-the-scenes thing versus a lightsaber showdown. I’m intrigued. They’re $20 through the Fab sale. I’m contemplating pulling the trigger. Feel free to talk me through this. I won’t necessarily talk back because I’m keeping my mouth closed to avoid ingesting airborne diarrhea particles while I make this decision.