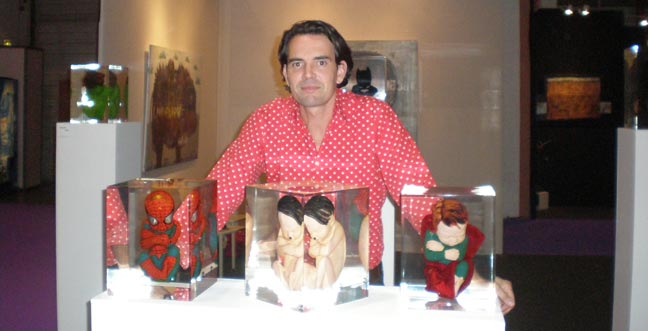 One of these things is not like the others…

I’ve just now read a couple blog posts about French artist Alexandre Nicolas‘ Les Prédestinés series which dates back as early as 2008. In the awesome way of the Internet, Les Prédestinés has returned to the public eye and reached a new audience. Oddly though, it’s been stripped of its original meaning. The new articles have titles like this: “And Now, For No Reason Whatsoever, Superheroes as Fetuses” (from i09) and “Utterly Disturbing Super-Hero Fetus Sculptures Are Things That Exist” (pretty funny, actually) from Comics Alliance.

But nobody, not even the French gallery currently presenting the work, mentions the one-balled elephant in the room. Yes, that is a fetal Hitler. At first I thought, “why isn’t that gratuitous?” but then I saw the series title. PRÉDESTINÉS: Creation and its risks. 8 superfoetus and one accident. How very true. Breeding has its risks. You could create a fictional superhero or a real life supervillain.

Or, like everybody else, you could just gawk at the creepy comicbook fetuses.

Thanks to Daniel Goffin for bringing this to my attention.