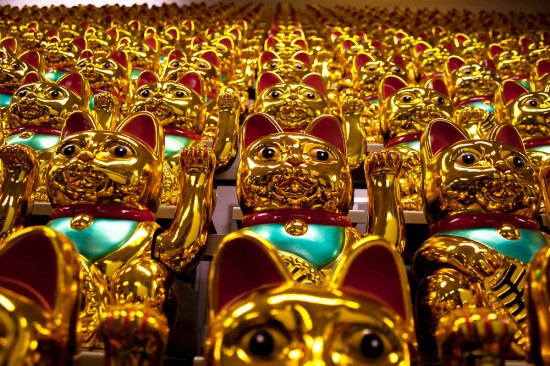 If I was really rich, maybe I’d buy this installation of 520 Maneki Neko (Lucky Cats) by Boris Petrovsky. Everyone knows you can’t buy love, and we’ve all seen those E! True Hollywood Stories about lottery winners whose lives turn to tragedy. So while money can’t buy you love or luck, it could potentially buy you an army of lovable lucky cats. Taking it one step further, you could then install the Maneki Neko army inside of an actual stadium where underdog athletes train so they’d have a built-in cheering squad! 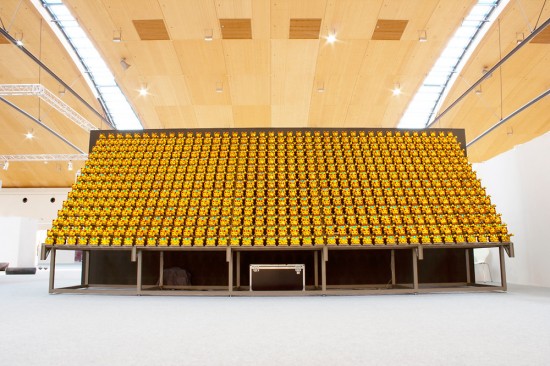 Petrovsky, an artist based in Germany, created the Army of Luck for Stuttgart’s recent Art Karlsruhe fair. Even viewing it from afar, it has a positive and mesmerizing effect. “It’s immersive,” Petrovsky told Co.Design of his decision to use stadium-style tiers to present the Army of Luck. “You have to turn your head up, down, right, and left to see the extent of the show.” 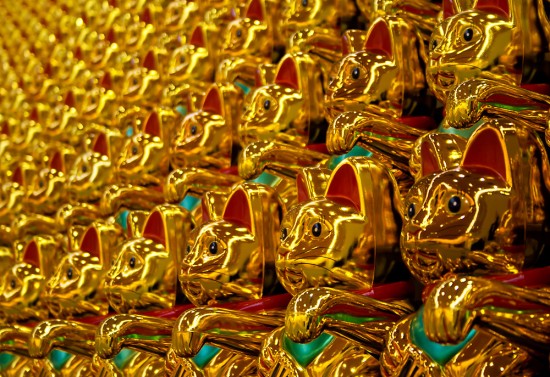 Petrovsky spent three years working to perfect the mechanics of raising and lowering the cats’ arms in unison with 25 different gestures. Beyond being mesmerizing and adorable, the installation is also interactive. Specially designed postcards made an encouraging promise: “Your happiness is our lucky command.”

When I look at the picture below, I imagine a QWERTY keyboard made of lucky cats, and it fills me with joy.

Speaking of technology, here’s a bit of behind-the-scenes about how Army of Luck works:

Wishes were written down, then typed into a keyboard behind the scenes. The coordinated servo motors that controlled the tabbies transformed their limbs into a scrolling marquee, each letter traveling across the shiny facade as a seven-by-nine-foot grid. The sentences also triggered audio clips at random, with samples sourced from political speeches, sporting events, demonstrations, parades, accidents, and entertainment from the 20th century to today.

Per Petrovsky: “[The Maneki Neko] express states of mind: joy, euphoria, desire, fear, hate, aggression and resignation, astonishment, outrage, pain, panic, desperation and fanatical excitement. I associate these with what drives people towards their own pursuit of happiness.”

Me too! If you have a Pinterest page, and you don’t pin this, you’re crazy! 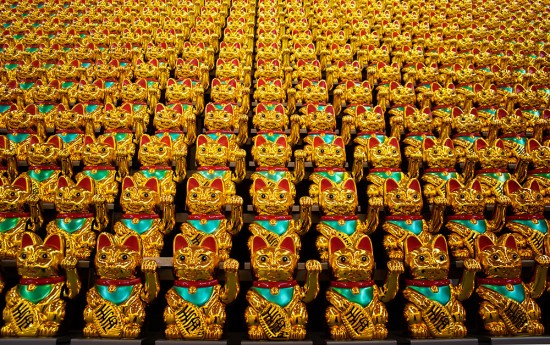