For an episode centered around making art inspired by parkour, the second installment of Work of Art felt surprisingly slow and stagnant. After witnessing some particularly aesthetic athletics, the artist-contestants were divided into two teams. Their reactions to the off-the-wall kinetics were conceptual and…digest-ural? Simon de Pury intervened, successfully talking the latter group out of their decision to “make poop”. de Pury, of course, is no stranger to that type of movement. Last year, I wrote about how he’d recently sold a half millimeter ball of Tom Friedman’s fecal matter for $42K. But then again, it’s sort of a same shit, different market situation these days.

Anyway, the two teams ended up going in different directions. In her recap of episode 2, last season’s judge and this episode’s guest judge, Jeanne Greenberg Rohatyn, makes this comment:

It is fascinating to learn the construction of this TV genre. Its editors are like unreliable narrators (so, the best storytellers), who tailor and highlight mere moments to carve out a drama. Suspense is found in facial expressions and delayed deliveries, repeated as commercials breaks.

The “highlight”of this episode was really more of a “crylight”. It was bittersweet to see Brooklyn-based Kathryn Parker Almanas go home because she was sort of gothy, but it did mean that the network would finally stop airing footage of her bawling out of context over and over and over. Almanas says a little bit about her exodus here.

Well then, let’s be like New York Parkour, and jump right in to SUCKtalk, episode 2. [By the way, episode 0 is here, and episode 1 is here. Collect them all!) Good mornings are exchanged and then… 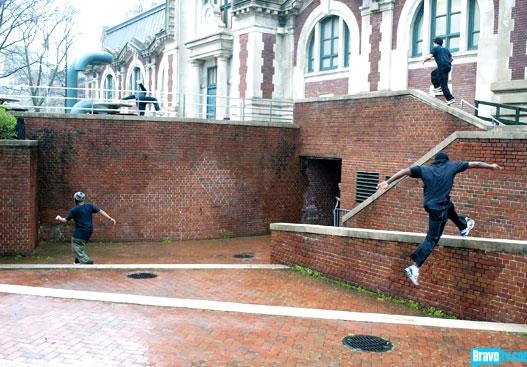 JB: If the parkour challenge had been a solo challenge instead of a group challenge, what would you have done?

THE SUCKLORD: I probably would have done the same thing. I would’ve made some chain-reaction-toy-installation-thing.

JB: If your group hadn’t switched from the “digestive” idea, what would you have done?

THE SUCKLORD: I was still trying to impose the idea of some sort of giant, constructed digestive system, like Mouse Trap, where a marble would travel through everyone’s pieces, like a chain reaction. A mouth that’s chewing and a throat that’s swallowing and a maze for the intestines…it could have worked, but everybody was on their own planet. It was kind of a miracle that it all sort of worked. That playground idea was really good. It was open-ended enough that it let everyone do their thing. 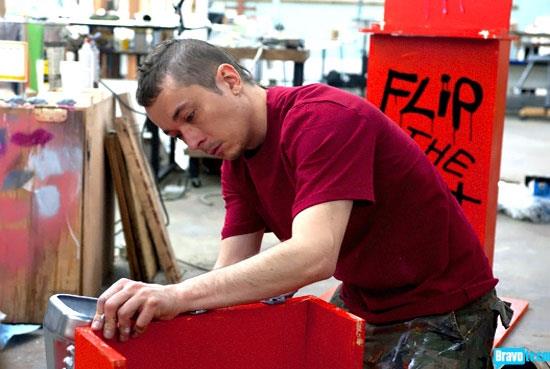 JB: I’m going to give you a couple quotes. This one comes from guest judge Jeanne Greenberg Rohatyn in the Huffington Post.  She said that you “got the challenge intuitively” but she didn’t like the “character you played.” What do you think she meant by that?

THE SUCKLORD: [At the art opening] I was doing a little performance piece where I was acting like a sideshow huckster. The game is based off Shoot the Freak at Coney Island. You know the scams that go on at Coney Island? I was doing Sucklord huckster. She doesn’t like the character. I could really give a fuck. 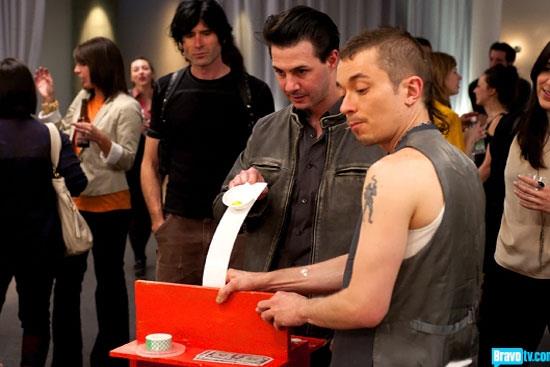 JB: Nice. Here’s another quote I came across. It’s from Jerry Saltz during last season. He wonders if “reality TV sometimes pulls the curtains back a little too far on certain personalities”. I was thinking about you and some of the things you’ve done on TV in the past and wondering if your life is “an open curtain”?

THE SUCKLORD: I don’t have any secrets. If you’ve seen my dating show, they revealed to the world that I piss in jars when the bathroom is occupied, and then I don’t throw it away. I don’t know if there’s anything else to hide.

JB: Yes, I have actually seen that. In fact, there’s an outtake from that show where your mom kind of blurts out some stuff about circumcision while you two are sitting at what the kitchen table…

THE SUCKLORD: Yeah, I was circumcised when I was 16. See, I’m not really Jewish.

JB: Right. But so talking about that to what amounts to basically a global audience in perpetuity feels totally normal to you?

THE SUCKLORD: What do I give a fuck? I got nothing to hide. I’m an Aries; we don’t keep secrets. I know who I am. I’m not scared that people know this about me. What can they do with that information that could hurt me? And if there’s some poor kid wandering around feeling kind of like uncomfortable because his foreskin is too tight, he might be inspired to get it wacked like I did, like the Sucklord did. And it was interesting because it happened when I was 16, which is apparently when they do it in Africa; it’s like a manhood tribal ritual.

JB: How do you think you reach that level of self-assurance?

THE SUCKLORD: It was a long hard road of cobbling it together. I used to be a very timid, chickenshit…I sometimes wasn’t even capable of raising my voice when people asked me what my name was. I guess I just realized that that wasn’t happening and I did the mental and spiritual work I had to do to figure out how to fucking be OK with myself. And I think maybe I went a little far with that. Maybe I’m too OK now. 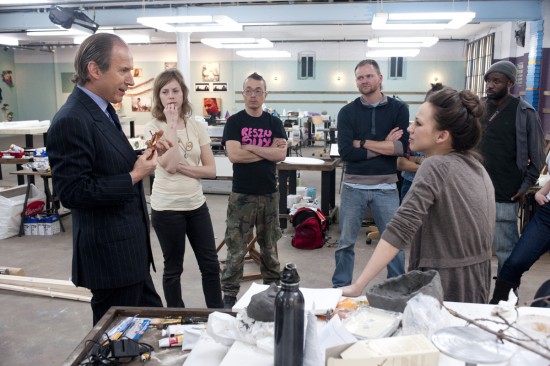 JB: Can you describe the mental and spiritual work?

THE SUCKLORD: It’s sort of hard to put it into perspective because I’m older now, and I have a longer view of things. I mean just all my life I’ve not really been very good at lying to myself as much as I may have wanted to. Fortunately, I’ve had people around me that don’t mind hearing me talk my face off until I work it out in my head. I had good parents. My mother raised me right. She raised me to love myself and she raised me to believe the universe gave a shit about me too.

JB: Your mom seems pretty cool. You lived with her for a while. Is your roommate on Work of Art better or worse than living with your mom?

THE SUCKLORD: There’s no one better than my mom.

THE SUCKLORD: I have my own booth, and I’m going to be doing The Suckathon, which will be run like a late-night talkshow. I’m going to be set up with a desk, and I’ll hold force and opine about everything that I feel inclined to opine on. I’ll have guests sit down and talk with me about anything relevant and irrelevant. 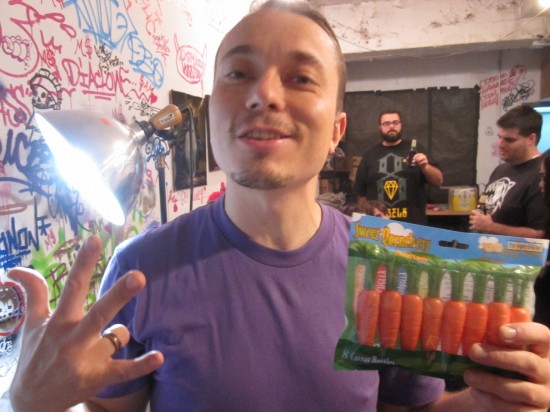 JB: What will you be releasing?

THE SUCKLORD: The main exclusive is going to be the next piece in the Scrubs of the Universe line [Ed note: photo above by SpankyStokes is a teaser…]. And I’m going to have an exclusive Dumny and some one-offs of the Spacemen 4-packs. I’ll probably drop them at different times during the day, and see if I can get people who are stupid enough to keep coming back for these things.

JB: Will you be doing interactive pricing like at New York Comic-Con?

THE SUCKLORD: I think $150 has sort of been determined to be the price for the Scrubs figures, and everything else has precedence.

JB: Designer toys are sort of in the mainstream news right now because of that tokidoki tattoo Barbie. Have you been following that scandal? 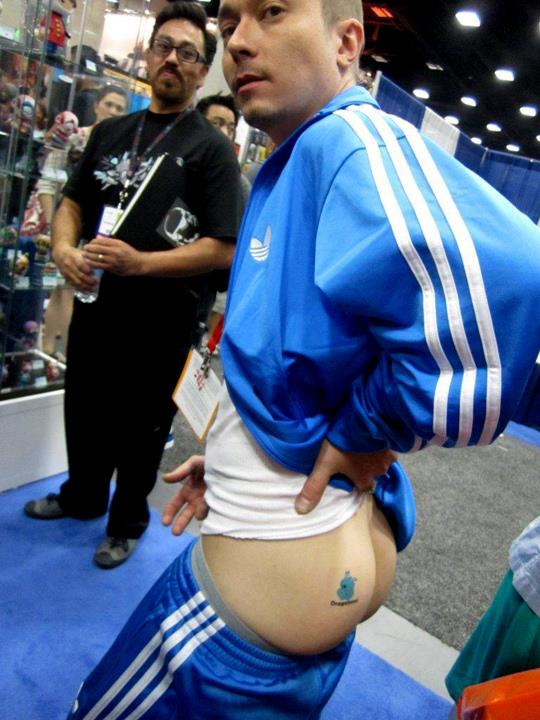 THE SUCKLORD: Why, because she has tattoos?

JB: Mothers are upset that their daughters might see this Barbie.

THE SUCKLORD: They’re worried that their daughters are gonna get tattoos? I don’t give a shit. First of all, everyone has tattoos now. It’s not that big a deal. Should you wait til you’re over 18? Sure. Should you get your parents permission if you’re under 18? Sure. Is a fucking doll gonna make you want to get a tattoo? There’s people walking around with tattoos everywhere! Get out of my fucking face.

JB: Yeah I’m right there with you. It’s great press for tokidoki though.

THE SUCKLORD: Of course. Controversy is great.

Indeed it is. Work of Art, episode 3 airs tonight at 9PM PST on Bravo.