Making toys takes money. In general, money is something that creative people don’t tend to have. Enter Kickstarter: the “largest funding platform for creative projects in the world”. Kickstarter uses crowdfunding to raise money for specific projects. The concept is simple: If your idea is exciting and resonant, friends and strangers alike will want to pledge their money to help you realize your project. The average pledge on Kickstarter is $25. This is equivalent to three cocktails or three blind-box toys and will neither put too much strain on an individual’s wallet nor fully fund a project. However, if multiple people pledge $25, then no one goes broke and the money starts to add up. 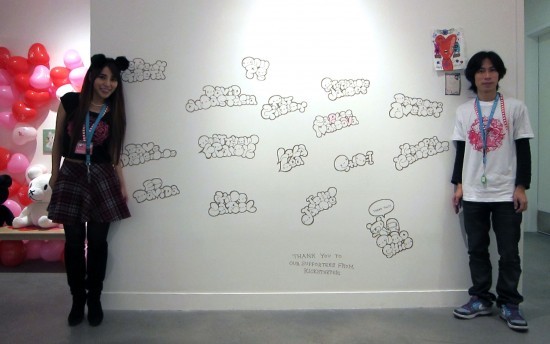 In December of 2010, I used Kickstarter to raise just over $3,000 and fly two designers from Tokyo to San Francisco for LOVE MOVEMENT, an art show I curated. Forty-eight (wonderful) people backed the project. The whole experience of fundraising with Kickstarter was so enjoyable that I immediately turned to being a benefactor for other people’s projects involving toys, jewelry and books. Doing something nice for someone else feels great, and it can be accomplished for as little as a grande latte.

Is this the way of the future to make toys? I talked to a few individuals who’ve used Kickstarter to fund toy projects to find out. 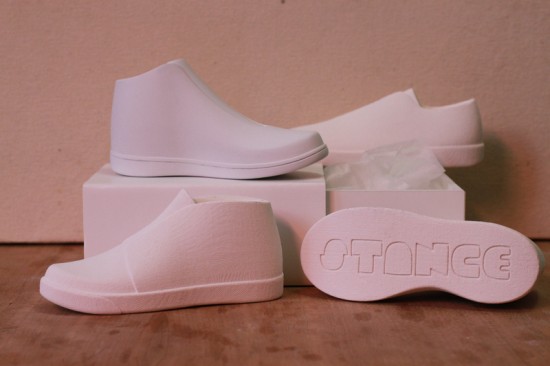 Industrial designer, Delroy Dennisur’s DIY sneaker toy project, Stance, is currently sitting very close to its funding goal of $20K. Dennisur says he found Kickstarter an empowering option for raising money: “Not only does it quickly validate whether you have a good idea or not, but it also helps you find your customers who in turn help you launch your project.” Melissa Carroll of the Aarting Collection, whose Blankie group toy series project recently came up short of its goal had thought the concept of Kickstarter meshed well with Aarting’s mission: “Blankie was created and chosen by artists so we thought we could garner support from the toy world as well as the Kickstarter community.” Rich “LASH” Montanari, whose Ollie the Cyclops project was double-funded, noted that Kickstarter is “an all or nothing deal, so either it was a success or failure and I had really nothing to lose.” Kevin “Motorbot” Olsen was inspired by LASH’s success and a rise in his own twitter following. When it came to setting up his I Need Help Building a Rotocasting Machine project, he considered: “If each follower sent me $1, I’d have a grand.” As it turned out, Motorbot’s project was almost triple-funded. 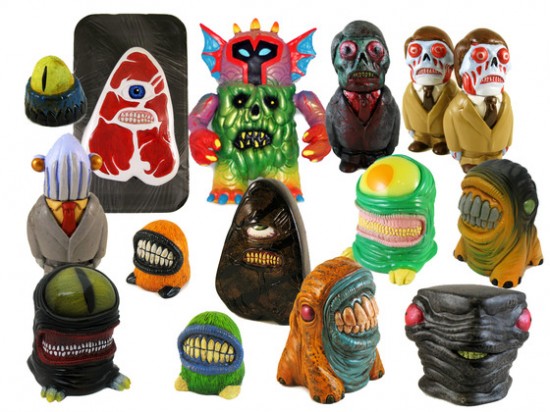 All four designers considered other fundraising avenues before launching their Kickstarter projects. Melissa and LASH spoke of big banking’s unfriendly attitude toward small businesses, and Motorbot summed up the risk of a traditional loan like this:

Let’s say I borrow $1000 from a bank, build this machine and then  raise $300 selling toys that I made. I’m still on the hook for $700. With Kickstarter, if it funds, all I have to do is make toys for the people who contributed. I know I can make toys for people. It’s essentially zero risk. In the end I basically presold a bunch of toys to people. 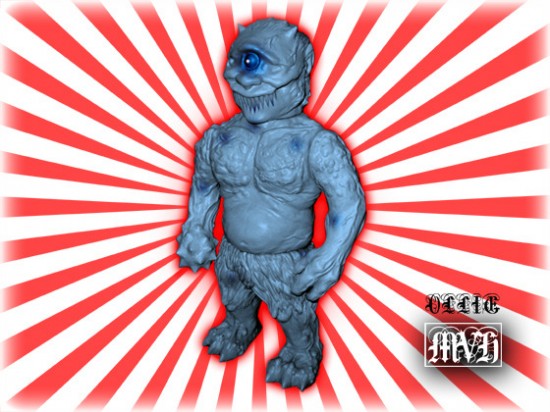 Spreading word of their Kickstarter projects through the toy scene’s blogs and their own social networks was the chief form of information dissemination for all four designers. Delroy commented on the power of Twitter, which I also noticed during my LOVE MOVEMENT Kickstarter project: “I thought Twitter was bullshit until I had to  jump on it.” Motorbot agrees: “Social networking is an amazing tool and is my main means of publicity. I at least know I’m talking to people who want to hear me as opposed to posting on a message board patrolled by a bunch of people that probably don’t care.” LASH’s path to success on his project was one of the fastest: “It spread like wildfire, and within 48 hours the project was not only fully funded but almost at twice what I asked for. Amazed would be an understatement.” 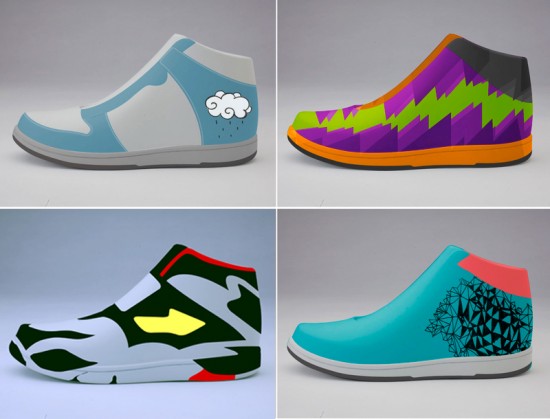 While toy art production is not typically embraced outside of our microcosm’s own media channels (something I personally work hard to change), Delroy’s Stance got some love from a local Boston blog, Core77 and SneakerFreaker. The diverse appeal of the Stance toy (designers, toy collectors and sneaker collectors), coupled with the widely publicized news of the Kickstarter project have helped propel Delroy to reach 80% of his $20K goal with less than a day to go. 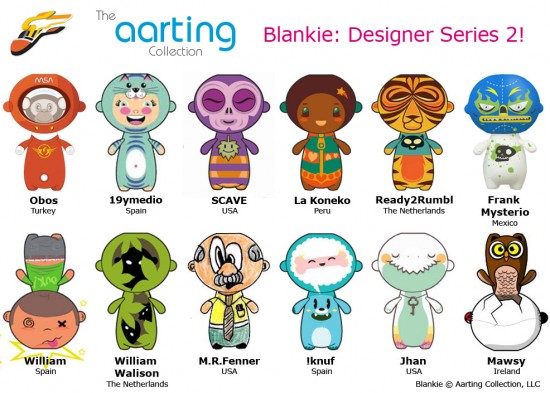 On the other hand, while Aarting’s Blankie managed to score coverage on the heavily-trafficked Huffington Post, not all press is good press. Based on the comments left on the story, readers tended to get stuck on “Huffington-esque” plot points like “made in China” and “is plastic what the world needs more of?” As for the toys themselves, they could have benefited from having more established artists attached to the project. While I admire the concept of what Aarting aims to do with their international roster of emerging artists, our current economic climate is just not really one that prompts people to part with their money on unknowns. The cultural climate for blind-boxed platform toys has also been in rapid decline over the last couple years due to perceived bandwagonism, oversaturation and lack of inspiration. Blankie Series 2 ended unsuccessfully with only $2,166 of $18K pledged. 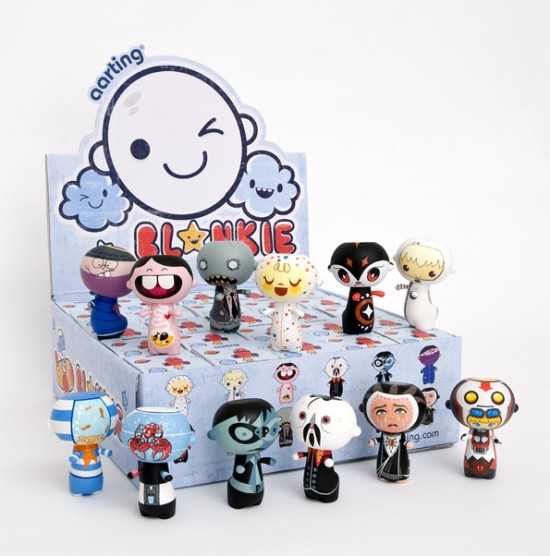 Motorbot and LASH’s projects were each overfunded. Both had much more modest goals than Delroy and Aarting. (Motorbot asked for $600 and received $1,698, and LASH requested $2,500 and received $4,946). In each case, both artists sought pledges within the communities who have witnessed their work for years. Both offered a tangible reward that was desirable for collectors. Moreover, due to being part of the toy-making communities, Motorbot’s and LASH’s peers were motivated to help them succeed. 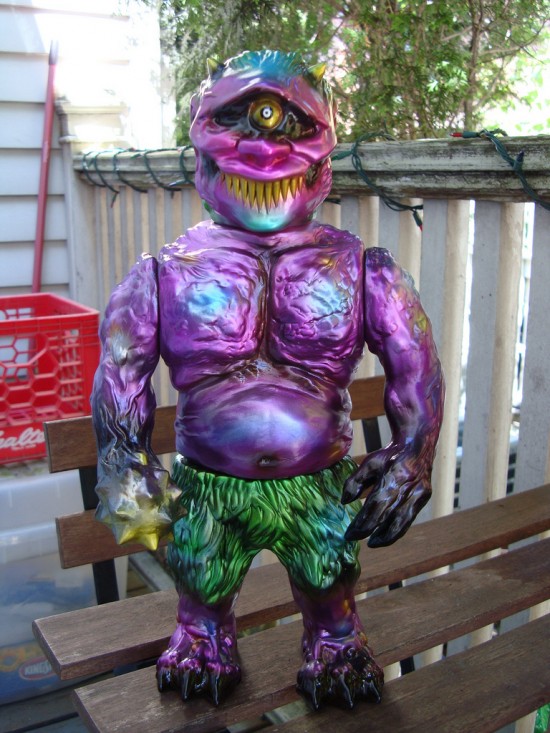 Kirkland Jue is a San Francisco-based toy artist and blogger who pledged on the LASH and LOVE MOVEMENT Kickstarter projects:

The main reason I decide to pledge is to support the cause or the people behind the cause. With LASH, we all wanted him to make the Ollie cause it’s a bad ass toy. By everyone getting together and throwing some money in, it meant we would get our Ollie faster.  The toy didn’t even exist but all of knew it would be awesome. It wasn’t even a question.  For $300, we got a one off Ollie and Sludge Demon, T-Shirt, sticker pack, etc.  I’ll pay that all day long.  I think we also feel like Angel Investors in a way.  We can say we helped LASH in some small way make his dream come true and as a result, we are proud parents.  It’s great to have the custom toys, but it’s even better to help his idea come to life. I’m proud everytime I look at that toy. 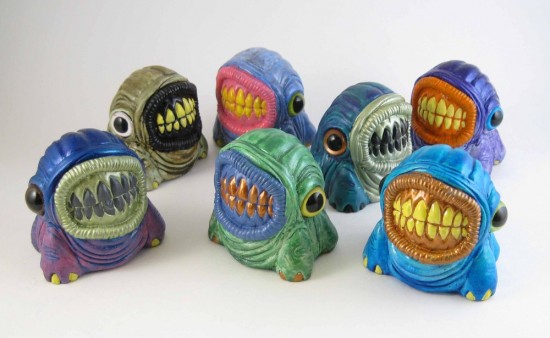 Matt Hisey is a San Diego-area based toy customizer and blogger who pledged on the Motorbot and LOVE MOVEMENT Kickstarter projects. He learned about them through twitter.

The decision to pledge was easy. Two people I have a lot of respect for were each attempting to put together something useful and productive to the art-toy scene. With the LOVE MOVEMENT pledge drive I was able to make a small contribution that made it possible, in part, to bring over the very artists that inspired the show. It was an honor to participate. For the Motorbot drive it was a matter of being in a position to help a talented artist, whose work I enjoy, ensure that his art could continue to grow and available to his collectors.

Notably, both pledgers mentioned that the physical (toy) rewards were secondary to the emotional reward of helping friends. This is not meant to underscore the importance of offering great rewards when launching a Kickstarter project. Both Motorbot and LASH found almost the entirety of their backers within their existing toy aficionado communities. The ultimate turning point of success in crowdfunding is for your project to crowdsurf over to people who do not know you. It is for those people that you want to design a great video intro and enticing reward bundles. 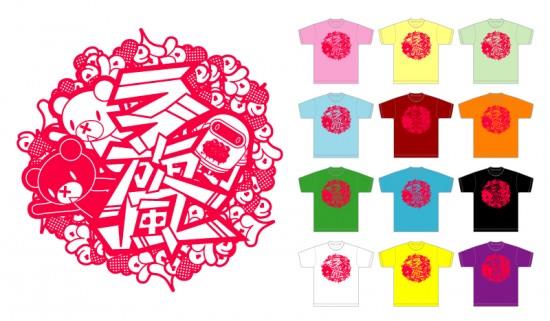 Following their successes, LASH and Motorbot both cautioned prospective users to read the fine print and understand what Kickstarter is before launching their project. LASH said: “They don’t really do anything for you besides take your money . They don’t promote you or help you find help in getting promotion. Basically, it just makes people feel confident as they are the middleman.” Motorbot agrees: “Overshoot your goal. Kickstarter takes a cut, and then Amazon takes a cut. Altogether I think it’s around 9% which doesn’t seem like much but can make a difference. If you need $500 and you raise $500, you’re only walking away with $455. I feel very lucky that mine went over its goal.” 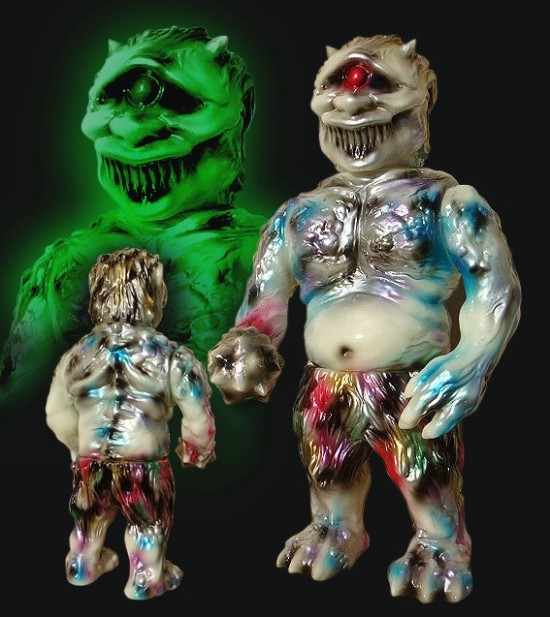 In the wake of success, I asked LASH what’s next:

To continue making toys.  This is my passion and what saves my life. Toys in general save my life. I suffer from depression, and this is my outlet that makes me happy work-wise. To be able to create a toy out of clay then see it realized and then collected by fellow collectors that your respect is a feeling unlike any other I have felt. There is nothing more rewarding to see your work in collections next to toys that you collect yourself.

I hope to continue doing this for the rest of my life and build upon what I have. I plan on releasing 2 toys a year, one smaller, one larger. Sculpting is become my addiction, I sculpt more than I paint now.  If I could, I would sit here for hours and hours and days and days and be happy with my clay.

Also, hopefully I can get to a point where I can produce other artists’ toys. I see so many artists that don’t have backing and are in the same spot I was. Right now, I can’t as I’m still in my infancy as a toy maker and barely have the funds to get my stuff made. But if things continue to grow, the first thing I plan on doing is being a producer that takes as little as possible from my artists. 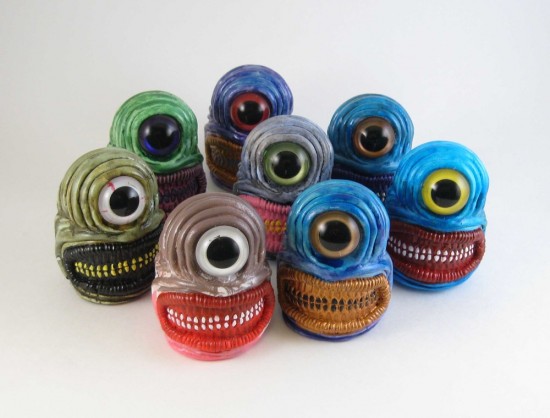 I start building. I will have access to my money this weekend and I will be building machines. I’ve got some work to do but that’s no different than any other day.

Delroy’s project has just about a day left to gain about $2K. “Failure is not an option,” he says. Help him out here.

At the last minute, I found another toy project on Kickstarter. 19 more days to get to $7,500, and they’re halfway there…