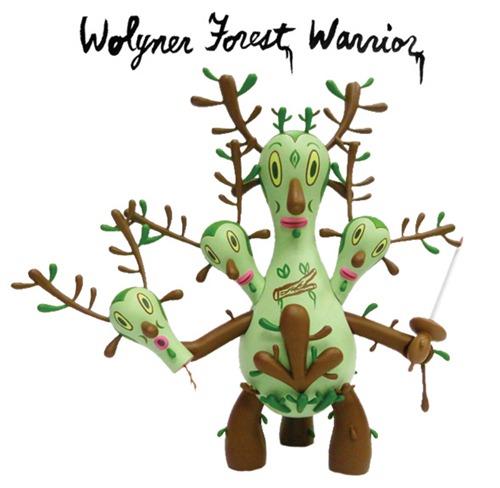 Somewhere between a pint of Chozen ice cream, Gefilte fish neo-kaiju toys and this just-announced Buckingham Warrior, it was decided that Gary Baseman is, in fact, a Super Jew. And I salute him. If you need more proof of his Super Jew status, check out his 2012 Chanukah Menorah featuring Toby’s Secret Society. I liked the idea so much that I appropriated it for my own festival of lights. 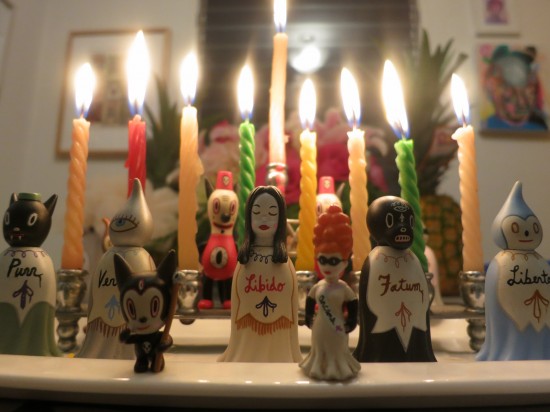 This legendary deer’s story begins in the Woylner Forest where a once idyllic life with his fellow creatures is violently upset by a tyrannical land baron and his men’s efforts to occupy and subjugate the forest.   In an act of ultimate resistance, the deer regrows his head and several others after being decapitated in battle, and in so doing so becomes the Buckingham Warrior. Inspired in part by Baseman’s father’s experience of Holocaust survival, the Buckingham Warrior defends not only the forest and the natural world but  in a broader context tradition, culture, and ways of life from forces of intolerance and evil.   He represents and protects precious ideals such as respect, dignity and freedom on multiple levels.

Up first for release is a GREEN colorway known as The Wolyner Forest Warrior. The piece features articulationpalooza (all three heads, two arms, and three legs) and removable decapitated head and sword. It’s limited to an edition of 400 pieces available for pre-order from The Loyal Subjects on Wednesday, February 22nd at 12PM PST for $115 each. Won’t this look terrific paired with Miss Muju’s resin Forest Guardian?