Longstanding New York designer toy shop, Tenacious Toys, and outstanding Los Angeles toy designer, Scott Tolleson, have combined forces to usher a black sheep through the dark void and into the lightness of being. Or basically, they just want to make a black colorway of a toy. 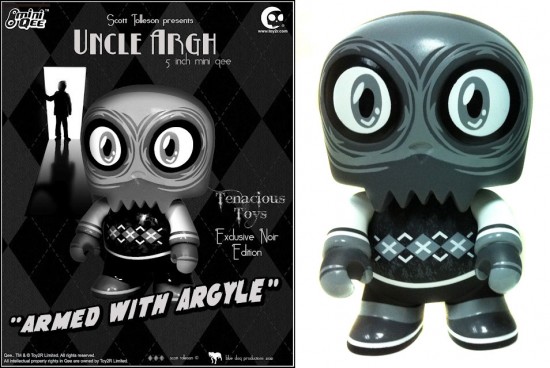 The toy in question? Tolleson’s Uncle Argh Qee, a popular production figure that is now sold out. Benny “Tenacious” Kline wants to produce a black/noir, or as I prefer, GOTH, version of the toy. Like his predecessor, Goth Argh will be “armed with argyle”. And everybody knows that the next best thing to being armed with guile is being armed with argyle.

You may wonder, why are they using Kickstarter?

Afterall, Toy2R has never shied away from producing copious colorways of a singular toy. I posed the question to Kline, who responded, “Cuz it works. I’ve donated to several, and I love it.” I know the feeling. I, myself, have run two successful Kickstarter campaigns (LOVE MOVEMENT & Luno), and I’ve also written a few posts specifically about using Kickstarter to fund toy productions. Check out “Funding Toys Using Kickstarter” and  “Your Thoughts on Kickstarter”. 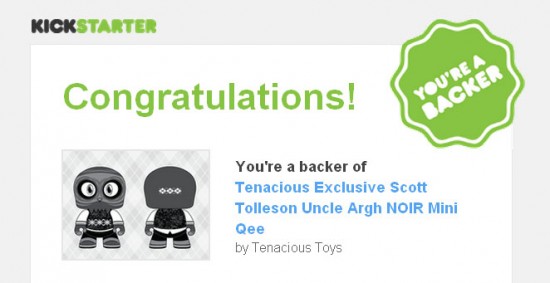 When this Kickstarter reaches its goal of just under $8K, Toy2R will produce 500 pieces of the NOIRGH figure as a Tenacious Toys exclusive. The artwork is complete and Toy2R is ready to make the figures.  A pledge of $30 is essentially a pre-order for the figure. If you’ve got extra money, you can pledge more and get stickers, signed prints, a painting or…a date with Scott Tolleson (pending wife’s approval).

The money raised through this Kickstarter will fund the manufacturing of the Uncle Argh NOIRs and the shipping costs to get them from Hong Kong to California. Rumor has it that should the Kickstarter be overfunded, the surplus will go to purchase a new Death to the Pixies shirt for Scott. It’s clearly his favorite.

Do your part to support our little scene here.