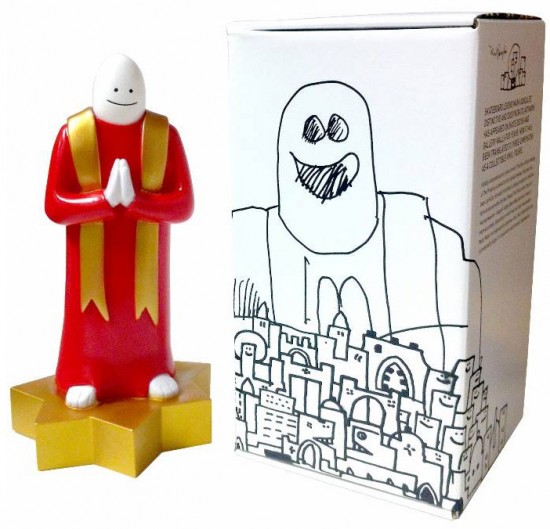 Super7 is about to release a new toy by Mark Gonzales, one of the most influential skateboarders of all time.

Skateboard legend Mark Gonzales’ distinctive artwork has piqued the interest of skaters and art fans alike for decades. The Priest illustration has a long history, as the original black and white image was first adapted into a three-dimensional sculpture in which castings served as a canvas for Gonzales’ original art. Now, The Priest has been carefully recreated from the original sculpture into a high-quality designer vinyl toy.

Prior to writing what you’re reading right now, I didn’t know much about The Priest. As you may know, I LOVE learning about art, history and culture via toys (for instance). It’s been a while since a Super7 sofubi has moved me to do research, but it’s happening now, so let’s go! 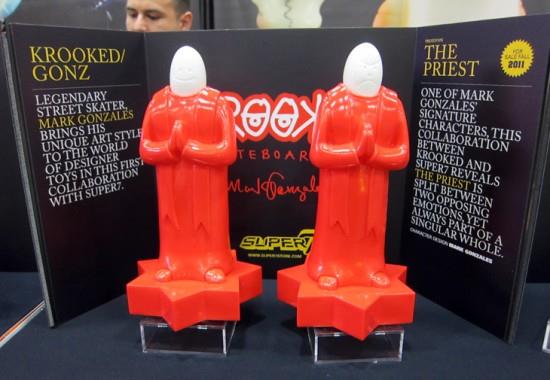 Before we travel across the pond to the UK and back in time to 1999, let’s take care of the current info. The Mark Gonzales x Super7 Priest vinyl toy first showed up at San Diego Comic-Con in 2011. Peep the recap here. 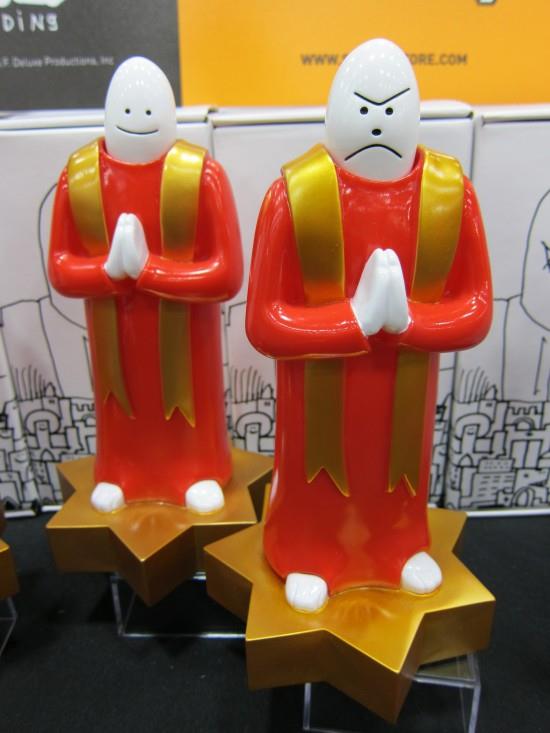 By Comic-Con 2012, The Priest was sporting his final colors and face(s). The skate icon stands 10+ inches tall and is made of soft Japanese vinyl. The figure will be released for $75 in a deluxe collector’s box at an in-store party tomorrow, Friday, November 3oth at Super7’s store in San Francisco. It becomes available online the day after. 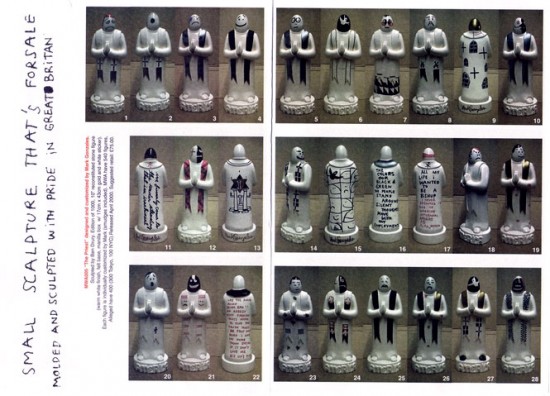 In the summer of 1986, Mark Gonzales performed a groundbreaking ollie at the Embarcadero in San Francisco. Per Wikipedia: So historic was this incident for skateboarding, it became forever known as the “Gonz Gap” and helped make the Embarcadero a popular location for skateboarders. Also in 1986, Gonzales became one of the first two skaters to skate handrails. There are some great YouTube clips of this if you have time. 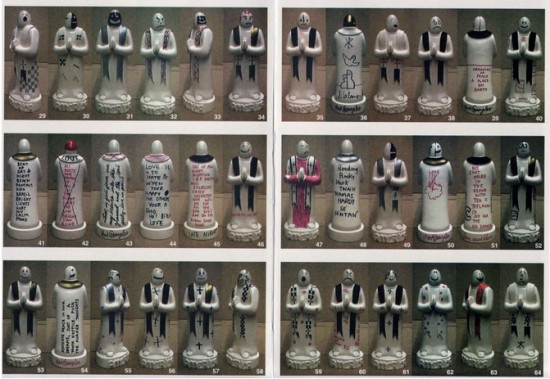 In 1999, UK-based record label, Mo’ Wax commissioned Gonzales to create a statue of his Priest character. They were designed by Gonzales and sculpted by Ben Drury. In 2000, Mo’ Wax produced 1000 statues, and each one was individually customized by Gonz. 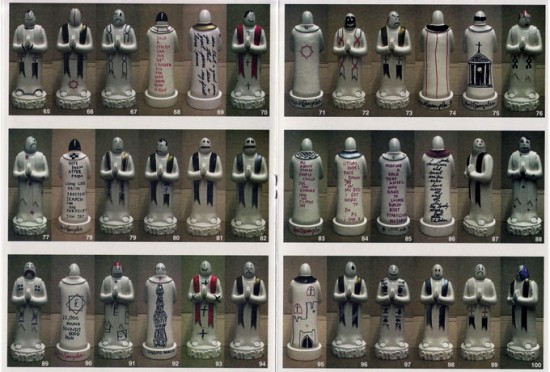 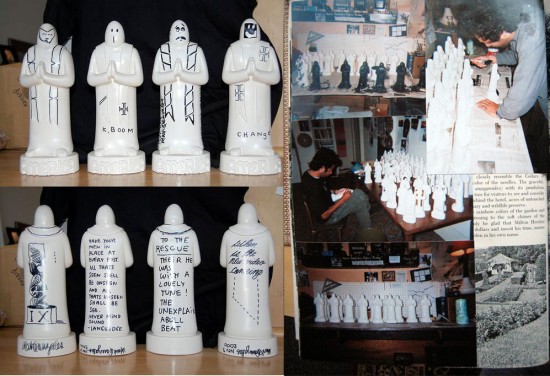 [Aside: Gonz’s customs remind me a little bit of Ninja’s customs NSFW.] 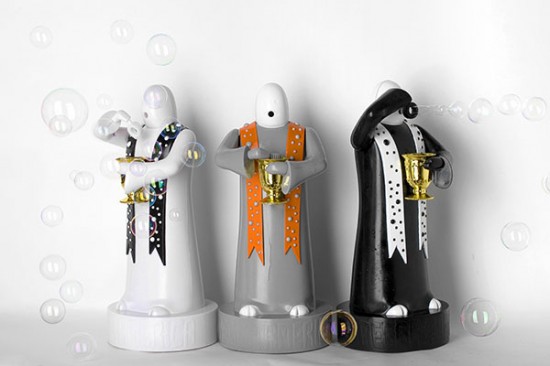 In 2006, Mark Gonzales had an art exhibition at dpmhi galleryin London. It featured new paintings alongside an installation of 1000 Megga America Priest figure. The new Priest character stood 13 inches tall and had a built-in mechanism that enabled it to “blow bubbles whilst giving communion”. 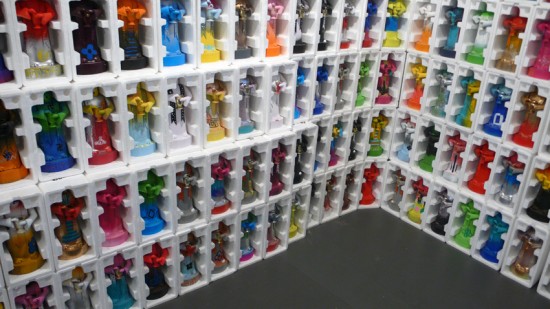 Gonzales hand-customized and painted 850 of the Megga America Priests, leaving only 50 of each of the original three colorways plain. He further engraved every single figure (including the unpainted versions) with the edition number and a signature. This is starting to sound like OCD art! 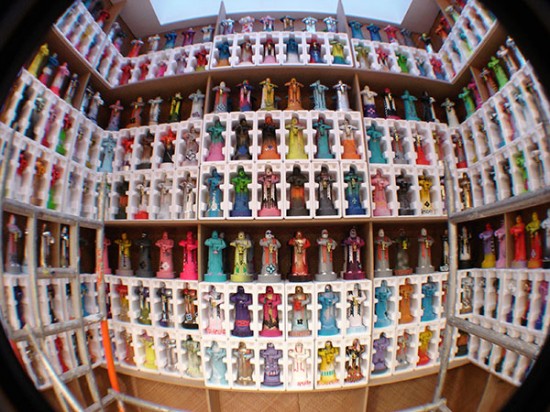 Super7 is not partial to announcing run sizes, so we won’t know if the 2012 Priests follow their 2000 and 2006 brethren in being editions of 1000 pieces. The soft vinyl Priests released tomorrow will not be customized, but that doesn’t mean there won’t ever be Gonz vinyl customs… He’s an interesting character.

In addition to his skateboard art and T-shirt art, Mark Gonzales also made a Be@rbrick and several colorways of a character called The Shmoo. Nice. 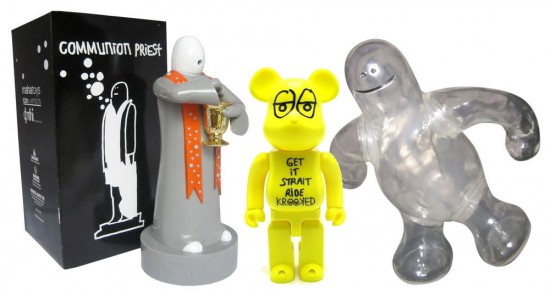 Be@rbrick and Shmoo by Mark Gonzales