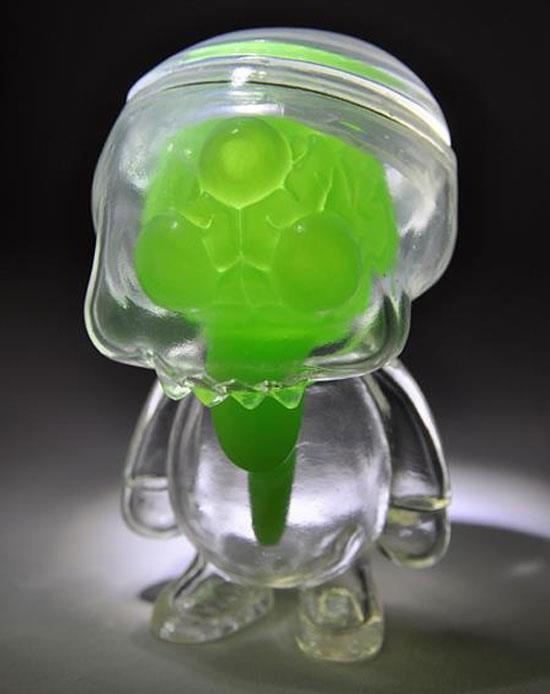 After this morning’s reveal of the curious collaboration between Chris Brown and Ron English, I’m happy to post news of another collab, one that gives me giddy goosebumps rather than black and blues all over my face. 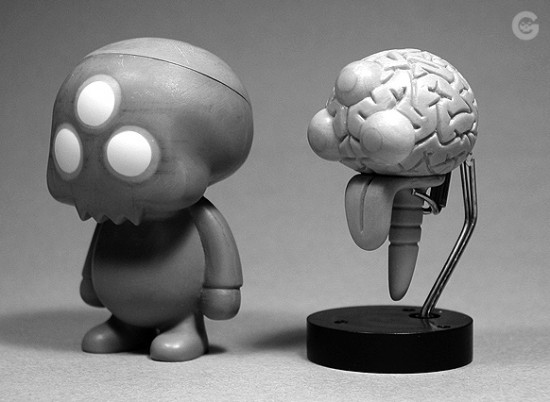 Ferg and Luke Rook (Grody Shogun) are finally ready to release Young Gohst, a project they’ve been collaborating on across continents for some time now. The new sculpt by Scott Wilkowski is a scaled down version (3 inches) of Ferg’s Gohst Squadt, with the addition of a brain stem (in multiple colors and four random form variants). 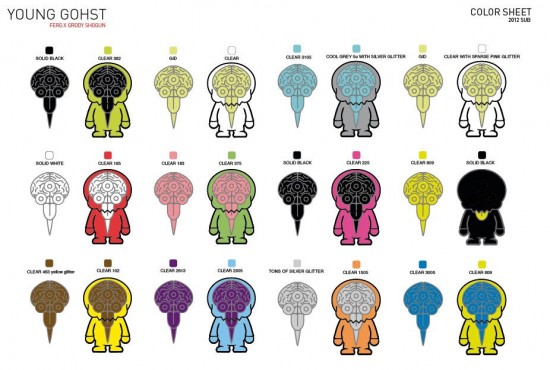 What’s especially exciting about this is that Young Gohst will be released in a subscription model. You pay up front and then receive two toys each month for 6 months. To dull the pain of the subscription ending in that 6th and final month, an additional mystery figure will be included. With the exception of this 13th figure, all color combinations are revealed chronologically in the graphic above (which you can click to enlarge). Should you be inclined to make your own colorways, per Ferg, the brains are swappable. Hello handsome green on green! 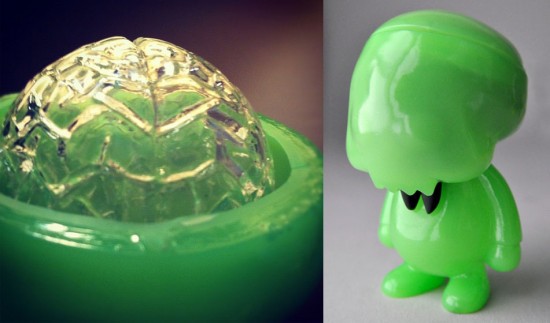 The release is set for April 30th at 12PM PST and will be an open order for approximately one week through Lulubell Toy Bodega. All 13 of the Young Gohsts are sofubi (soft vinyl made in Japan), and a full subscription is $285 USD (including domestic shipping). International shipping is an additional  $70 (approx. $11.50 per shipment). 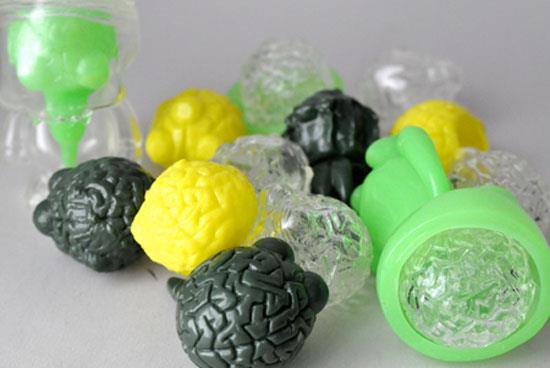 For those short on cash and/or space, a two-piece set in the colors of the first two figures in the chart will be offered at $58 (including US shipping). If you opt for the subscription, you’re paying about $22 a figure. I think if you can afford to pay it up front and forget about it, receiving two vinyls in the mail each month (with random brain forms to look forward to) seems like a ton of fun. Of the four potential brain forms, the “faceted” one below bears the signature of Grody Shogun… 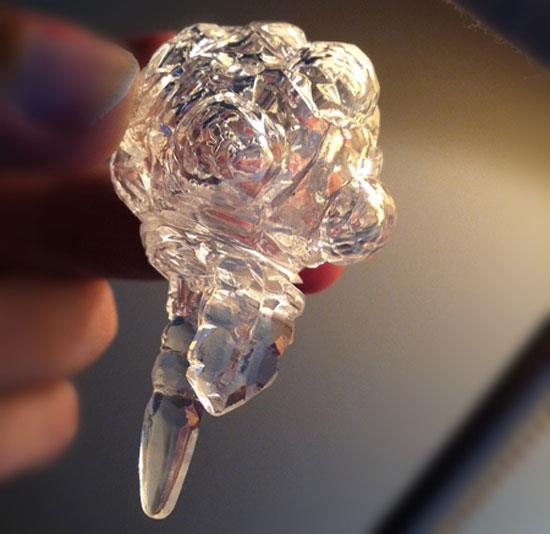 Click through to see that Grody brain one more time (with my least favorite Instagram filter, Kelvin!), plus a selection of prototypes, drawings and teasers as we look back at the history of Young Gohst.

Incidentally, did you ever wonder why it’s “Gohst” vs. “Ghost”? According to Freg, therse no rael raeson. Can’t wait for this one! 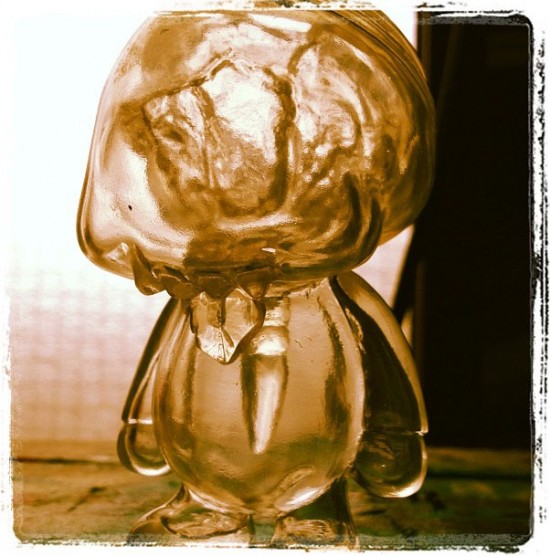 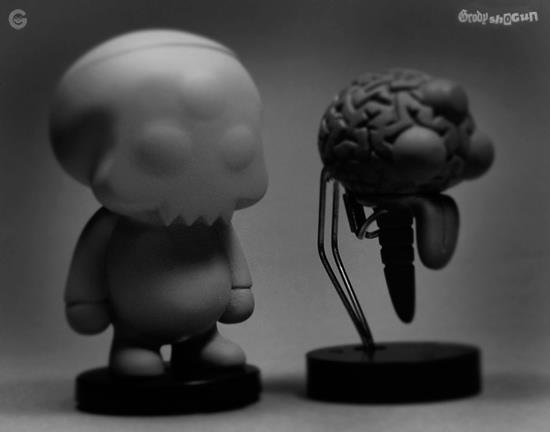 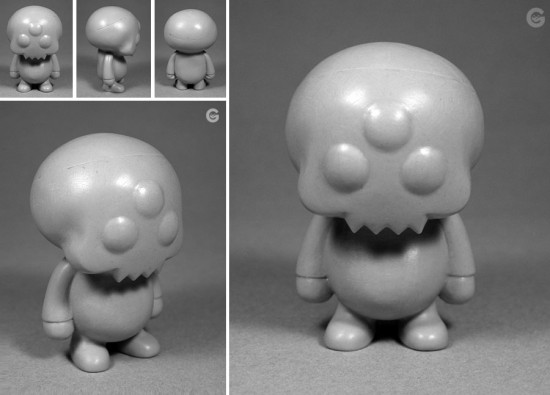 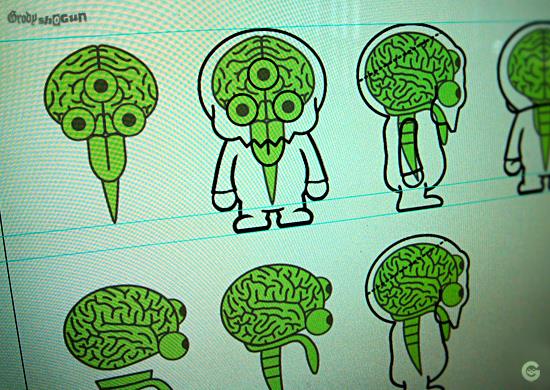 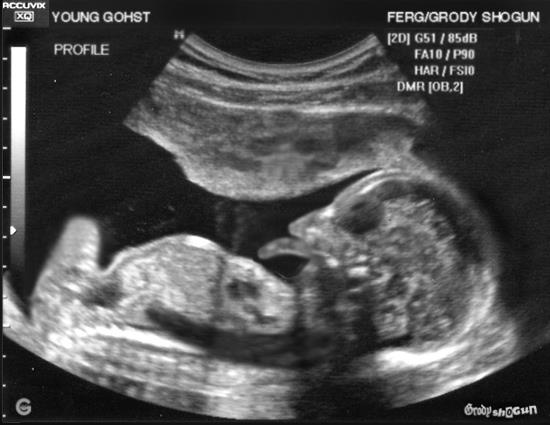