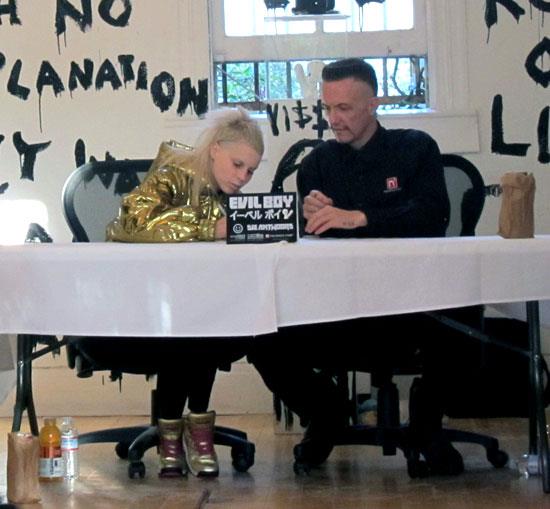 I’ve been following the Die Antwoord Evil Boy toy since Juxtapoz foretold of it last April. Late Tuesday night, Jux dropped the first photos of the NSFW vinyl toy. It was their character, Evil Boy, erect, with hand-painted embellishments from Ninja. Yesterday, the anomalous South African zef rap rave artists were in San Francisco for their TEN$ION tour. Ninja and Yo-Landi stopped by FIFTY24SF for an hour to do a CD and toy signing. It was pretty tame, all things considered. 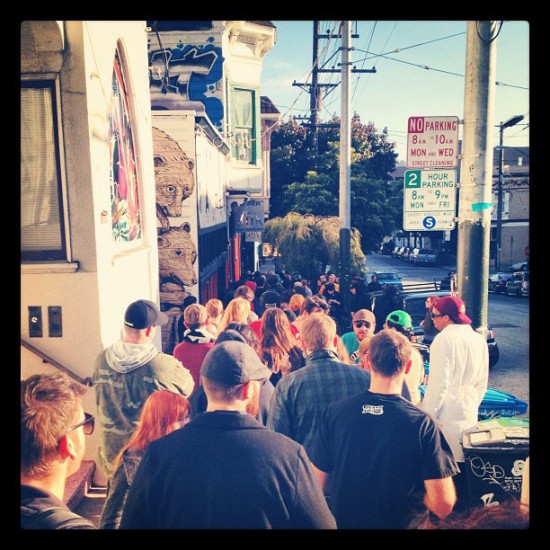 A decent crowd queued up along Fillmore awaiting entry to the installation and court of Die Antwoord. Everybody was pretty well behaved. Possibly the craziest thing I saw was the $200 price tag for the Die Antwoord Evil Boy toy. In the niche world of collecting limited edition toys, that’s par for the course on an edition of only 45 hand-painted pieces. But most people in line were there for the music. And many of them had already downloaded the TEN$ION CD. 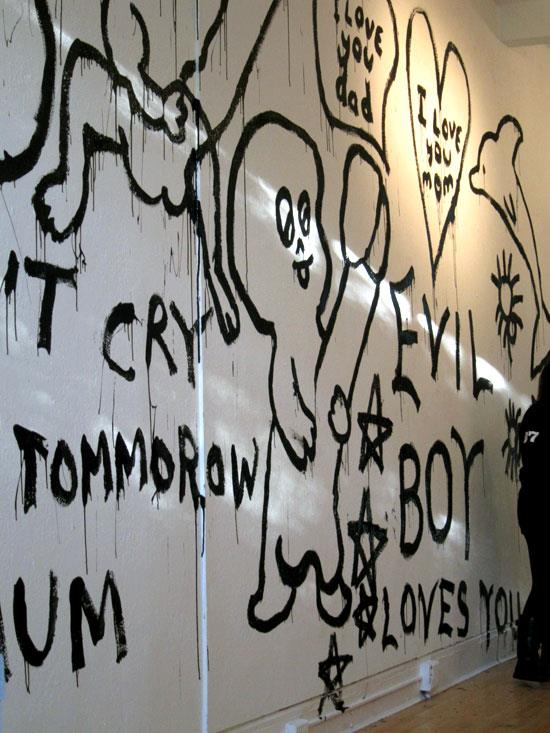 “Evil Boy loves you” reads the wall. He loves you a lot. The “installation” consisted of a scrawl of wall-to-wall Die Antwoord-isms and depictions of Evil Boy. This must be the “big big love” that The Pixies sang about? 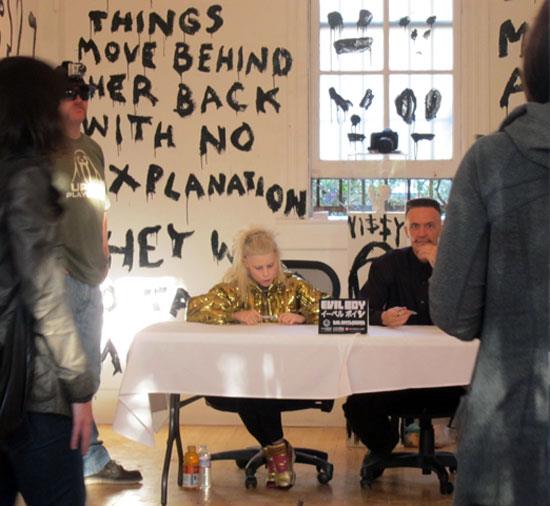 After about 45 minutes, we were told that only people buying the new Die Antwood CD or the $200 toy would be able to actually enter the gallery and meet Yo-Landi and Ninja. I expected wanted mayhem to ensue, but nothing happened. Some people left; others continued to wait patiently. I departed my position and went into Upper Playground to check out the toy. 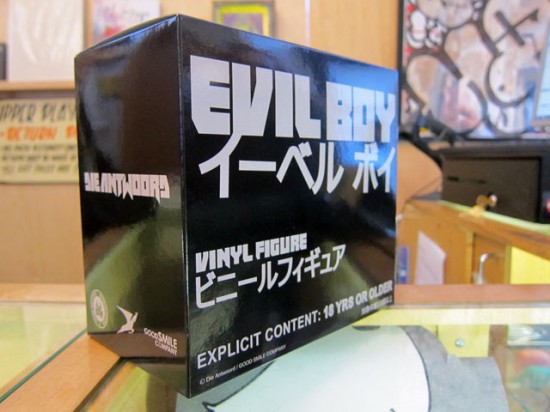 Good Smile Company produced the Die Antwoord Evil Boy toy, but I don’t think you’ll find it with the rest of their anime “Scale Figures“. The box is black with an “explicit content: 18 years or older” warning. 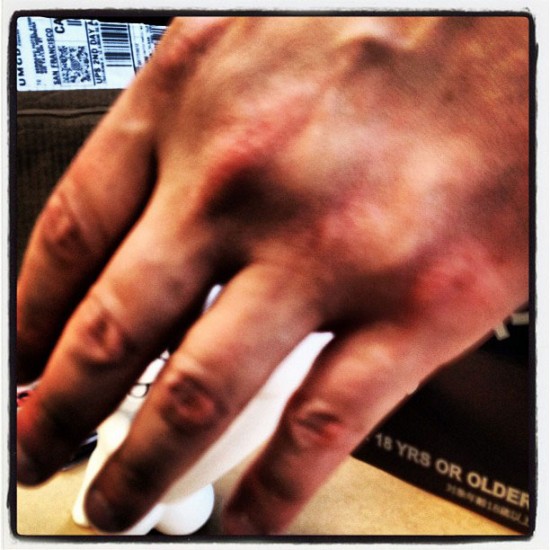 At first, I was blocked from taking pictures. I’m not sure if it was because of my preternaturally youthful looks or weirdness about which media outlets got dibs on the big reveal. In any event, I got the shots. Click through if you want to see gigantic ghost genitalia. 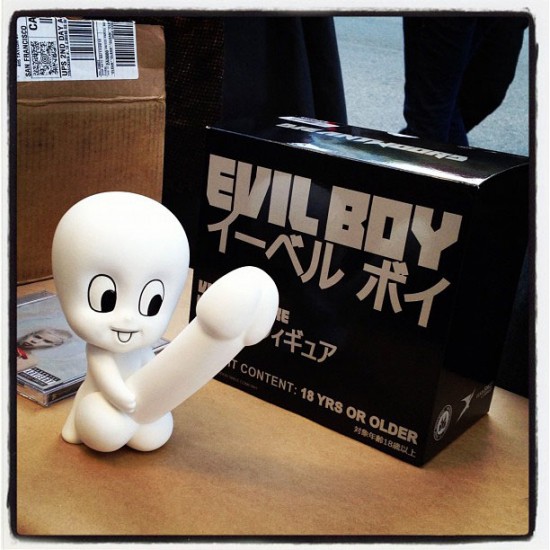 Here’s a rare unpainted white Die Antwoord Evil Boy. These were not for sale. Only 45 white Evil Boys adulterated by Ninja were available at a cost of $200 each. 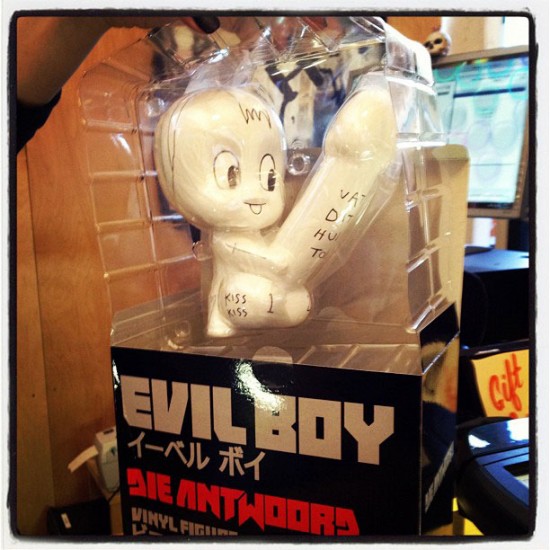 This particular Die Antwoord Evil Boy looked very similar to the one Juxtapoz posted, except, ahem, his testicles have a different number. 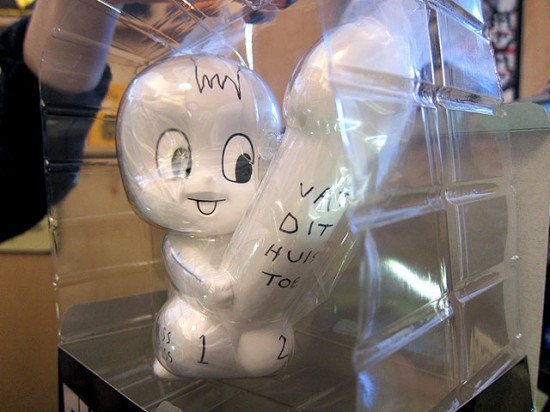 With about 15 minutes left of the Die Antwoord signing, this was the last available Evil Boy. It was kind of tempting. After all, his glans read “I love you.” But I had to pass. There will be others. 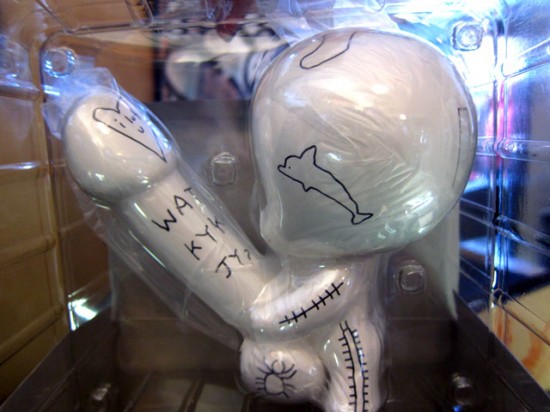 Red and black colorways are forthcoming. (You can see the red one here.) Thoughts? 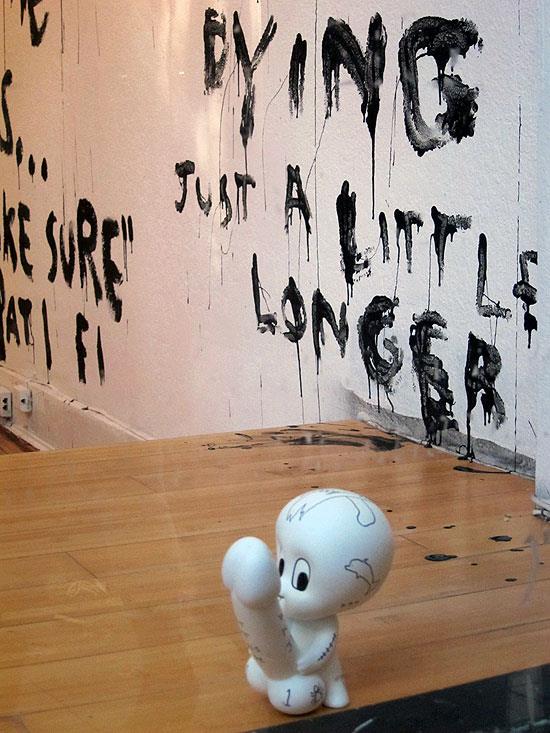