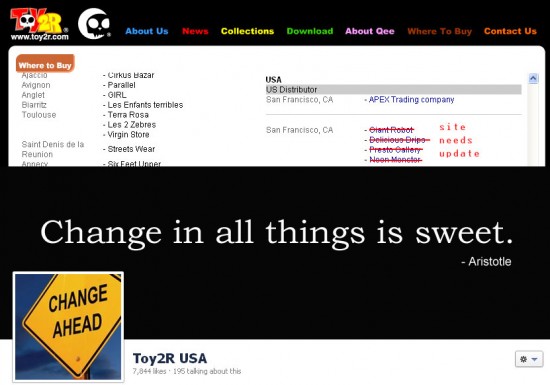 Just as the UK’s Dudebox announces the creation of its US store, Toy2R, Hong Kong’s longtime purveyors of designer toys, announce the closure of theirs:

While the Qeevolution continues, it is with deep regret that Toy2R USA will not continue its voyage with the Hong Kong company and will be ending operations in August 2012. The decision for closure has been a logistical and unavoidable reasons. Toy2R USA will no longer provide further support (sales, marketing, etc) for the Hong Kong office. Toy2R (Hong Kong) Limited will continue to provide services to all its clients while evolving the Qee brand and launching several new and exciting projects direct from its base of operations in Hong Kong.

Word of the closing did not come as a complete surprise, as Toy2R’s US presence can be summed up as a “struggle” over the past few years. Perhaps markdowns at 2008’s Vinyl Toy Network convention were a warning sign, but by 2011’s San Diego Comic-Con, the brand’s situation was dire. Earlier this year, when Tenacious Toys and Scott Tolleson partnered on a Kickstarter campaign to produce a colorway of Tolleson’s Uncle Argh Qee, I suspected the end was near. Toy2R’s very business model was producing colorways! Crowdsourced funding seemed like a cry for help.

Artist series Qees were my introduction to designer toys in the early 2000s, but Toy2R spent the end of the decade preoccupied with licensing partnerships and focusing on their Baby Qee platform. In terms of the latter, I don’t think the Baby Qee resonated with American adult collectors the way it may have in Asia. For the former, Kidrobot beat Toy2R to the table with full (non-platform) mini-series Simpsons and Futurama toys.

Although Toy2R launched its line of Bart Simpson Qees in August of 2007, they were already starting to get dusty on pegs at Tower Records and Borders when in August of 2008, Kidrobot released its full suite of Simpsons figures. Toy2R responded with a bit of a Napoleon complex and two different 6-foot Homer Simpson Qees, and they continued to focus on Bart for the summer of 2008. In June, they held a Red Cross Benefit auction featuring more than 90 artist-customized Bart Simpson Qees. Curiously, they ran the auction on their own fan forum, and because the forum was not a particularly active one, the auction flopped. Toy2R’s forum trouble was directly tied to its mistake in not buying Tim Blackmore’s thriving Qeester forum earlier that year. After Qeester’s demise, the American and European fanbase became fragmented and never regrouped.

Not helping Toy2R in the USA: our economy. In 2006, Tower Records had filed for its second bankruptcy and the stores changed hands for a few years before the brand completely fizzled out. In 2011, Borders followed suit. There was a brief highlight in 2010 when Toy2R released their Designer Qee Series 6. I was working for an independent comic and designer toy shop in San Francisco at the time, and I called the series “a return to form” for Toy2R. Despite the strength of the new series’ designs, I watched as casual collectors passed over Qees for the larger size, softer vinyl and unique shapes of Kidrobot’s Dunnys. When Toy2R opened its online shop, there was no longer a need for fans to patronize the indie toy shops. All four “mom and pop” toy shops listed as San Francisco retailers on Toy2R’s website have since closed.

Toy2R is now liquidating its remaining merchandise through an eBay shop. There, you can get good deals on Qees by Dalek and Charles Stephan, plus one-off prototype Qee Bears, Simpson Qees and unreleased Futurama figures. R.I.P. Toy2R USA.